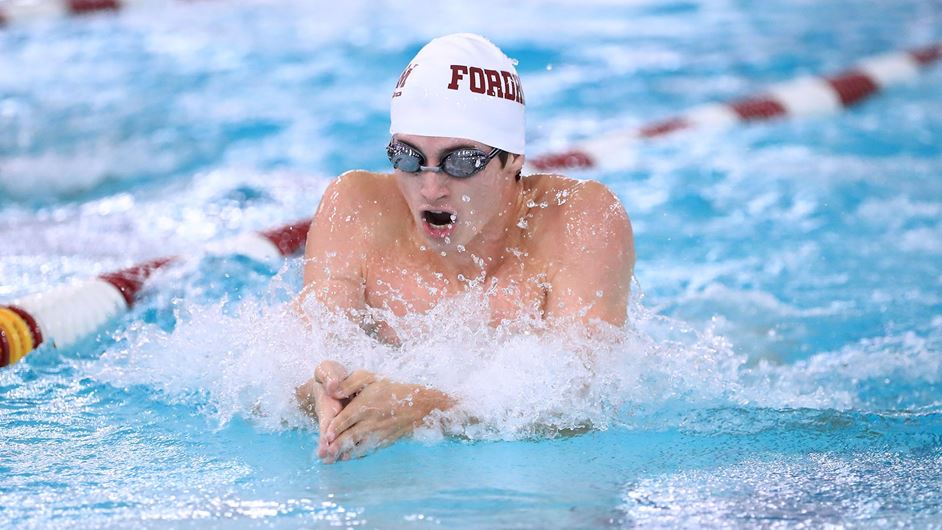 The Fordham women posted a 176-96 win over the Hawks, while the men came away with a 169-111 victory. Current photo via Fordham Athletics

Bronx, N.Y. – (October 22, 2021) – The Fordham swimming & diving team closed out a busy week with its second meet in less than 24 hours as the Rams swept the meet with the Monmouth Hawks at the Messmore Aquatic Center on Friday afternoon.

In the relay, the 400 medley relay team of Leire Martin, Kamau, Navarro, and Madeline Bergin placed first in 3:56.15, while the 200 freesytle relay group of Navarro, Bergin Zebrowski, and Kiara Norris won in a time of 1:38.53.

The Rams will next be in action on Saturday, November 6th, when the team host Georgetown for a 1:00 PM meet at the Messmore Aquatic Center.

Fordham came away with victories in both men’s and women’s competition. Three Hawks won multiple events as Cole Dyson secured wins in the 200 and 500 freestyle, Callan Smith placed first in the 100 and 200 backstroke and Alexandra Ho took first in the 50 and 100 freestyle. Ho also was part of the women’s winning 200 free relay.

NOTES & QUOTES
“Tonight was a big step forward in the level of competition that we’ve seen so far this year and I thought the team reacted well. I thought they fought hard, gave great effort and performed well. I think we have a lot of things to work on but overall I am happy with the direction of the team and we are looking forward to continuing our progress when we get back in the pool on Monday.”
– Monmouth head coach Matt Nunnally

UP NEXT
Monmouth travels to Seton Hall next Saturday, October 30. The Hawks and Pirates will meet at 1 p.m. in South Orange, NJ.