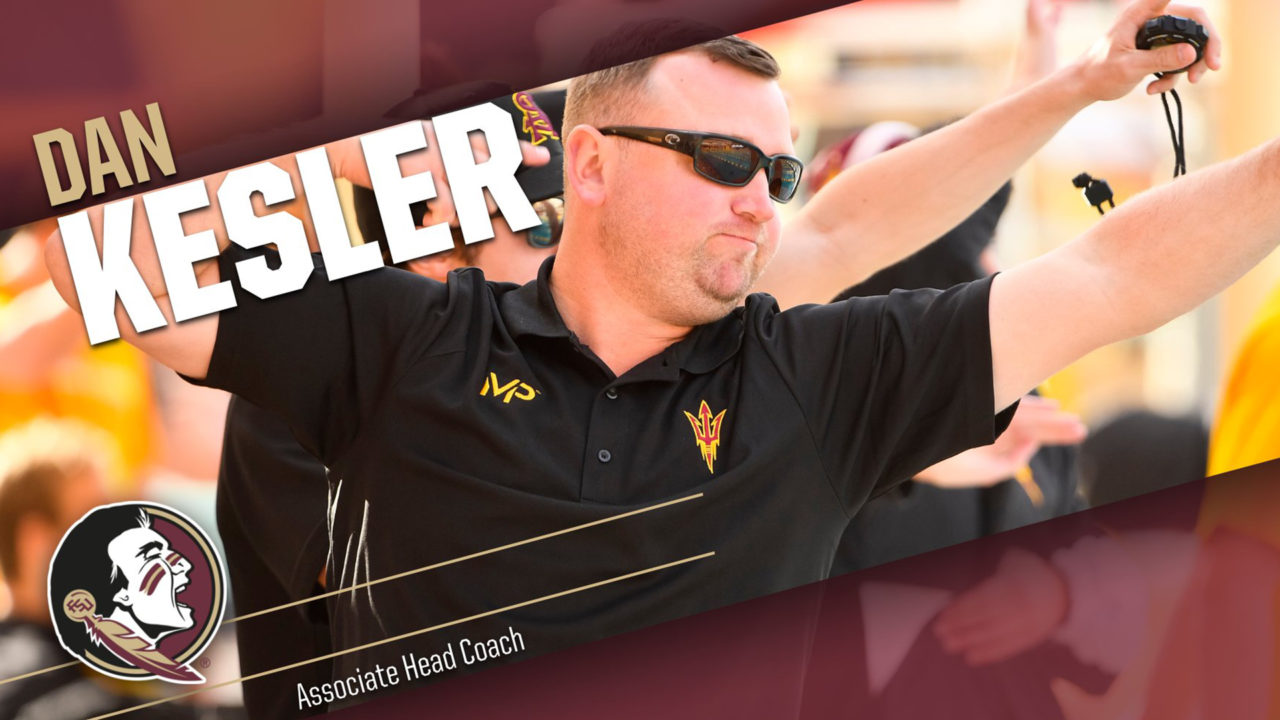 Dan Kesler joins the program from Florida State, where he worked primarily with the program's middle-distance and distance groups. Current photo via Florida State Athletics

Florida State has announced the hiring of Dan Kesler as the swimming & diving program’s new associate head coach. He replaces Ozzie Quevedo, who left the same position earlier this summer to join the newly-assembled coaching staff under Coley Stickels at Alabama.

Kesler has spent the last 7 seasons at Arizona State where he worked primarily with distance and middle distance groups while also serving as the recruiting coordinator. Kesler was hired before the Bob Bowman era at Arizona State, and retained on staff for the last 4 years under Bowman, who is most famous as the coach of Michael Phelps and the US Men’s Olympic Team head coach in 2012. Bowman is a Florida State alumnus.

Kesler has a big feather in his hat after the 2018-2019 season. The Arizona State women finished 20th at that meet, and Kesler’s distance group was involved in 6 of the team’s 7 scoring swims (either as relay members or as individuals). While Florida State has excelled in the sprints, under head coach Neal Studd, their distance group has not kept up the same pace. For example, last year, the Florida State men didn’t score any points in the 500 free or the mile at the ACC Championships. They had 2 of the top 4 finishers in the 100 free, by comparison – and that doesn’t include Will Pisani, who actually had the fastest swim but out of the B final. The team’s highest-scoring finisher in the women’s mile at ACCs was freshman Stephanie Holmes in 16:33.17 for 12th place

“I am delighted to add a quality and experienced coach like Dan Kesler to the Seminole family,” Studd said. “We had some amazing candidates and after a thorough search his personality was a perfect fit with our staff and team culture.”

“I am thrilled to work with Coach Studd and his staff at Florida State,” Kesler said. “From the moment I stepped on campus, I knew this would be a great opportunity to achieve excellence. The facilities and campus are first class and I can’t wait to explore Tallahassee and everything it has to offer.”

Prior to Arizona State, Kesler spent 5 years as the top assistant at Division II Wingate Univversity, where the team captured 5 straight Bluegrass Mountain Conference Championships and finished in the top 6 at the NCAA Division II Championship meet in 4 of his 5 seasons. That includes Iaroslav Denysenko being voted the NCAA Division II Swimmer of the Meet after winning national titles in the 500 free, 1000 free, and 1650 free.

Kesler swam collegiately at NC State, where he was a captain as a junior and an ACC finalist. Kesler’s brother, Rob, is a coach with the North Baltimore Aquatic Club.