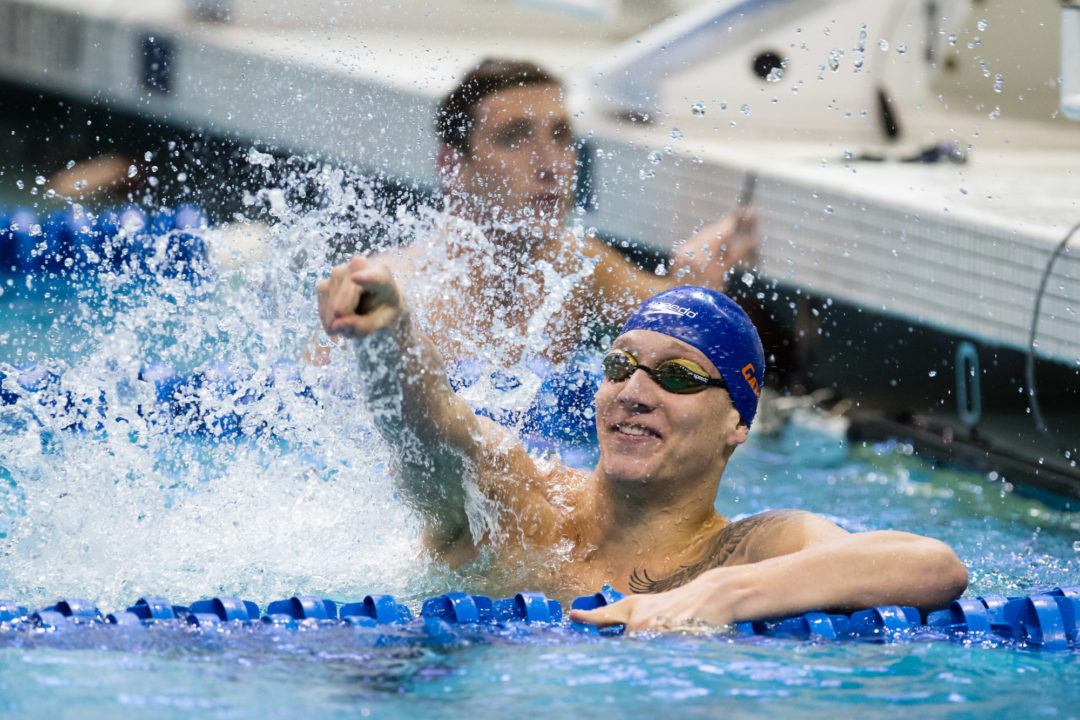 Think Caeleb Dressel is going to win three events again this year? So do we. Current photo via Tim Binning/TheSwimPictures.com

We polled our staff, did our research, and came up with our six-months-out best guesses as to who would be standing atop the awards podium for each event at the 2018 NCAA Division I championships, and without any further ado, below are our choices by writer:

If our collective crystal ball is correct, here will be some of the highlights of the 2018 Men’s NCAA championships:

Now, again, the above descriptions are only best guesses as the season gets going.  Surely some swimmers will emerge, others may take some steps back, and other picks in March are going to look a lot different than they do now.  In the meantime, leave a comment and let us know what you think is going to happen.

Agreed 1:41 at intrasquad. Nobody is close to that

He suited up tho.

It’s not like they’re saying he has no chance. They’re picking the likeliest winner. And picking against Dressel would be pretty dumb at this point

I think some people made some picks just to be contrarian 🙂

6
-2
Reply
Thadawg
Reply to  JP input is too short

LOL @Coachymccoachface
And Dressel will go 38.00 in the 100 free

I don’t see no pix? Where are the pix?

Bobthebuilderrocks – they’re certainly our pick to win the meet. In spite of popular rhetoric, it doesn’t necessarily take a ton of event wins to win the whole meet. Texas has probably 19 guys who can score at NCAAs.

you can win NCAAs without an individual win. I think that Texas and Florida did it.

Reminds me of last year when we had people at NCAAs talking about how ‘everybody’ was doubting Texas during the regular season. Having moderated these boards on a daily basis, I can’t remember a single person suggesting Texas wasn’t the heavy favorite to win NCAAs. This year seems no different. I’d be pretty surprised if they ever slip from #1 in our Power Rankings, but I’d also be pretty surprised if we didn’t hear at least one person talk about how ‘everyone is sleeping on Texas.’

It’s sort of the classic Bill Simmons ‘Nobody Believes In Us” conundrum.

It’s interesting that the coaches voting in the cscaa pole ranked Cal’s men’s team number 1 all last season, and ranked them number 1 again this year in the preseason pole.

Have Texas and Cal competed head to head in a duel meet recently?

I doubt Quah Zheng Wen will win 200 fly. Schooling definitely has the chance to win 100 fly.

9
-7
Reply
JP input is too short
Reply to  Abnen

It would be fun to see Justin Wright pull a back half past everybody to win, but I just don’t think he has enough speed.

4
-4
Reply
swimfan
Reply to  JP input is too short

4
0
Reply
James
Reply to  JP input is too short

I’m holding out hopes for Wright as well…he’s shown more speed every year, and all his fastest 200 Fly’s came this past season/year. He’s a 200 fly specialist, so he can put all his training and concentration into the event. Not to mention his 100 is improving – while not “world class” he is still a quick sprinter.

Long shot, but best of luck to him!

Schooling has a chance but almost everyone predicted Dressel because he is by far the favorite.

Shebat and Seliskar, who is the third?