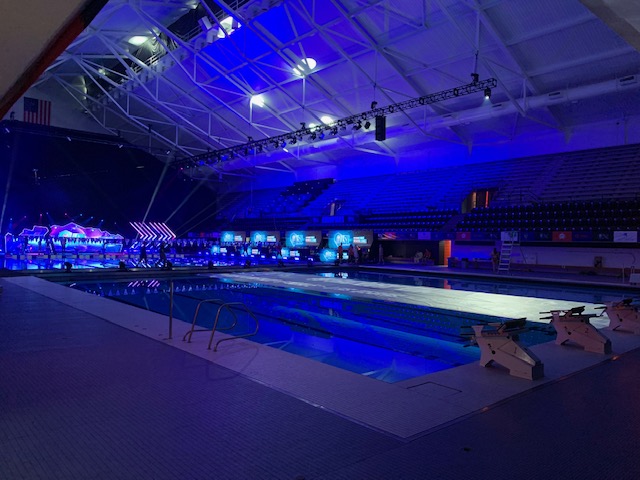 If any World Records are swum at the last 5 meets of the 2019 ISL season, FINA says that they will recognize those Records, presuming all rules are followed. Current photo via Braden Keith

FINA, the international governing body for swimming that regulates most of the world’s swimming competition says that it will accept World Record swims from some of the meets of the International Swimming League calendar.

Specifically, FINA will recognize results and records set in the series’ last 5 meets, starting in Lewisville, Texas from October 18th to 19th, presuming all other FINA guidelines are followed.

This means that the American Record, and near-World Record, set by Katie Ledecky of the DC Trident last week in Indianapolis, won’t be recognized by FINA. USA Swimming says that it will recognize Ledecky’s swim as an “American Record” if all paperwork is properly filed, in addition to another American Record set by Melanie Margalis, referring to the “United States Records.” FINA keeps a separate list of “Americas Records,” which refers to the totality of North, Central, and South America, plus the Caribbean islands. Ledecky’s time is faster than the FINA-recognized “Americas Record,” which generally have a lower threshold for recognition. We have asked FINA if Ledecky’s swim will be recognized as a continental record.

If Ledecky were to drop another .15 seconds to break the World Record in Naples this coming weekend, FINA would not recognize that swim either.

To help bring greater clarity to meets that FINA will and will not recognize World Records at, the organization has set up a calendar that includes FINA and non-FINA events that it will acknowledge and accept times from. In addition to the last 5 ISL meets, other non-FINA events listed as approved include, for example, the European Short Course Championships in early December. You can see that calendar here.

Ledecky swam a 3:54.06 in the 400 free on Sunday in Indianapolis, her first short course meters meet in 6 years, which just missed the World Record of 3:53.92 held by Ariarne Titmus. While rumors have circulated that FINA has refused to recognize World Records set in ISL meets, what FINA actually said this summer is that it would not recognize World Records unless the meets were held in compliance with FINA rules. Those rules include seeking approval 6 months prior to competition and the presence of drug testers to collect samples from any record breakers.

ISL is employing an anti-doping protocol at their meets, though it’s being managed by the national anti-doping organization of the host nation rather than the league itself. We have asked a follow-up to FINA about where the difference lies between the series’ first 2 meets and the last 5, and will update if they provide a response. The 6 month approval period was an early point of emphasis by FINA in the records conversation, and may be to blame for non-recognition of the first 2 meets.

Ledecky, in post-meet interviews, said that she thinks “all times should count.” ISL wouldn’t be the first time that World Record swims have gone unrecognized: several swims that seemed to have broken World Junior Records have not been acknowledged by FINA, including times done in Hungary and China. There hasn’t been an explanation given for why some of those swims weren’t recognized. World Junior Records and World Records generally follow the same approval process.

ISL meets where FINA will recognize World Records, if rules are followed:

Yes because that makes perfect sense. Love it

I think I’d be surprised if it went this weekend with all the travel. Definitely soon though!

WR not recognized for Naples swims.

next american stop or vegas

I’m confused. You say in the title they’d will be recognised at 5 meets. Then, you go on to list 5 meets where they won’t be recognised??