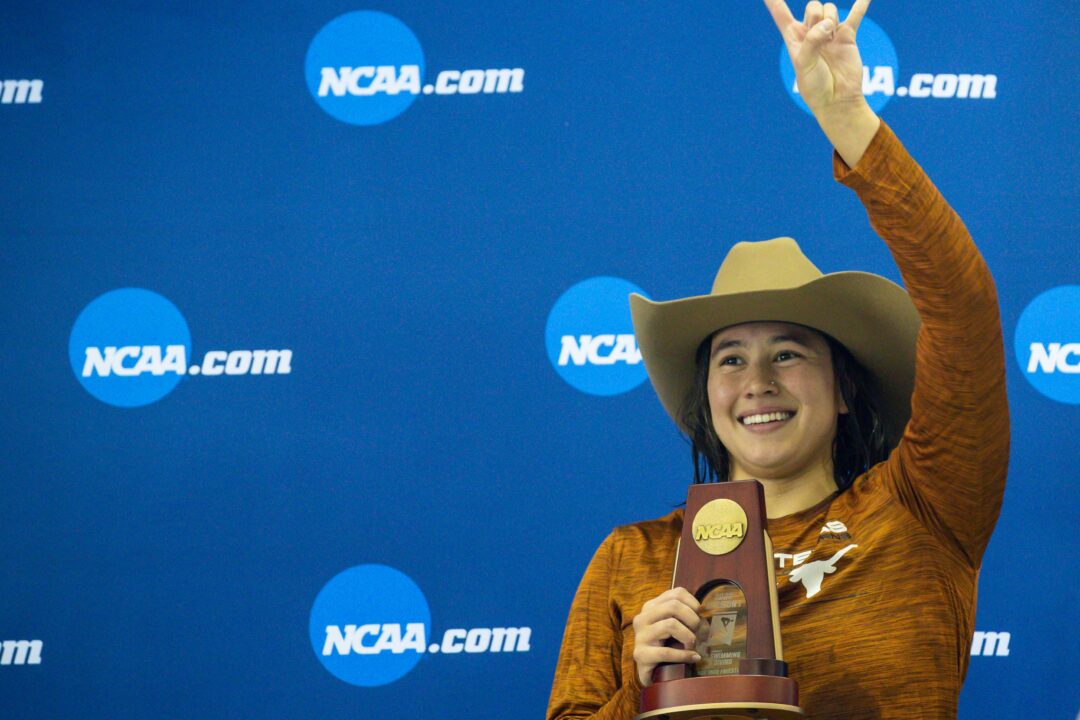 Erica Sullivan explains that the photograph of Weyant, Sullivan, and Forde from the 500 freestyle podium was taken out of context. Current photo via Jack Spitser/Spitser Photography

Erica Sullivan replied to a comment on an Instagram post explaining that the photo of Emma Weyant, Sullivan, and Brooke Forde was not a podium protest of Lia Thomas’s win in the 500 freestyle at the 2022 Women’s NCAA Championships on Thursday.

Weyant, Sullivan, and Forde finished in 2nd, 3rd, and 4th in the 500 freestyle. The trio were all Olympic teammates in Tokyo.

@DannyReds commented on an Instagram post, “I wish she wouldn’t have posed with the 3rd and 4th place girls with Lia alone on the podium.”

Sullivan replied, “@DannyReds dude I was taking a picture with my closest friends from the Olympics. It was after the first group photo was taken. News sites have used that photo and taken it out of context.”

Lia Thomas on the podium as a National Champion at Women’s Swimming NCAAs will most likely become one of the most famous images in the history of collegiate swimming. pic.twitter.com/OXtjRt0mu4

Sullivan is referring to a photo that was captured on the podium for the 500 freestyle final. After the award ceremony and the full podium picture was captured, Weyant, Sullivan and Forde posed for a picture on the 3rd place spot, after the remaining A-Finalist exited the photo. Thomas was still in her 1st place spot while this photo was taken. As the Olympians were photographed, a wider shot of this image that included Thomas standing at 1st place went viral on the internet, with news sites taking the photo out of context and calling it a protest by excluding Thomas.

Both Sullivan and Forde have publicly supported Thomas’s participation in NCAA competition. Sullivan was one of the 300+ NCAA swimmers who signed a letter in support of Thomas, transgender, and non-binary athletes. Additionally, Sullivan wrote an opinion piece for Newsweek titled “Why I’m Proud to Support Trans Athletes like Lia Thomas.” Forde wrote a statement in support of Thomas that was read by her father Pat Forde, a Sports Illustrated reporter, on the College Football Enquirer podcast.

A slice of time without context is open to interpretation and will be abused by those with an agenda. Watch the video.

That phots is clearly photoshopped.

She would say that, hypocrite

Sure, she’d say the truth. There was a totally normal podium ceremony. I’ve taken photos like this too when I’ve been just off the top step in track meets. The winner typically stays up there for solo photos🤷

A lot of my former teammates were piggy backing on this false narrative, so happy to see it’s not what was being portrayed.

How could they possibly join the false narrative? You’ve got to be incomparably stupid. That’s Erica Sullivan and Brooke Forde. To believe they would protest against Lia Thomas is equivalent to believing that Clarence Thomas will take the liberal side in every one of his votes for the remainder of his time on the Court.

damn Forde’s 800 free instagram post is full of congratulations for “third place” in the 500 too… would be funny if she posted her statement on her instagram to shut them up.

Honestly it’s so funny like her post is literally about winning the NCAA title in that relay and the comments are just “congrats on third!1!1!1!!!”

There are articles out there saying there was a protest. People who don’t pay attention to swimming see this stuff and don’t know what’s going on.

I am not even interested in Swimming and it took me less than a minute to debunk.

I found out that all 3 went to the Olympics last year via some Swimming website that gave the results as well as links to profiles of weyent, sullivan and forde, that stated that they had represented the USA at the olympics.

I felt so horrible for all four of them seeing that picture. It doesn’t matter what any of them did, it was always going to be interpreted however the beholder saw it. (I didn’t even see the picture via a right-wing chud posting it, I saw it here. Luckily farther in that thread the OP updated with a thread adding that full context, but still.)

For instance! I read a Fox News piece on the 200 free – I’m not proud of myself, my phone showed it to me and I just clicked – and they described how “the winner” (they didn’t even mention Ruck’s name) was IGNORED by Thomas as… Read more »

Weyant actually turned off the comments for her most recent Instagram post where she announced she was becoming a SwimOutlet ambassador, but people are just swarming to her other posts. I have to interpret that as a sign that she doesn’t enjoy it.

It has to be horrible and overwhelming.

(Also I just tried to edit my post but ya got me too quick! Dangit. Welp. Here’s me with better phrasing, hah:

I felt so horrible for all four of them seeing that picture. It doesn’t matter what any of them did, it was always going to be interpreted however the beholder saw it. (I didn’t even see the picture via a right-wing chud posting it, I saw it here. Luckily the OP updated with a thread adding that full context later on, but still.)

For instance! I read a Fox News piece on the 200 free – I’m not proud of myself, my phone showed it to me and I… Read more »

Yes. And she def shouldn’t have to now be the voice in all of this because she came 2nd.

It’s probably for the best. Bc even if she was like I’m okay with second those same people cheering her now would turn on her in an instant

2nd to a mannnn

There were also tons of articles and posts that occurred between prelims and finals (and were never updated) that were written as if prelims were it. They called Brooke Forde the runner-up and fail to consider that, beyond placing in the top 8/16, the results of prelims are meaningless. (Really, I’m just annoyed by anyone complaining about anything when they clearly have no idea what’s even happening, especially if they’re a “news source” “reporting.”)

Nothing will ever top that Daily Mail article in December saying that Lia Thomas broke Paul Biedermann’s world record in the 200 free with her 1:41.9

there is no way. 😐
do you have a link by any chance?

NOT THE SCP FOUNDATION!! that article and you don’t recognize the bodies in the water are both swimmer cognitohazard

Ooooooooof I forgot about that! Like just imagine you were the person they put on that article – you don’t know anything about this sport, but it makes sense that a WR that’s been around since 2009 got broken at a random college meet? (If I had to write a post about a sport I knew literally nothing about, that alone would be enough of a red flag that I’d probably spend another minute to figure out if I was missing something.)

But I don’t think accuracy was the point of that article. Riling up the anti-trans bigots was what they were going for, and how better to do that than by having “proof” that some random trans woman… Read more »

It’s a joke because none of these people legitimately care about swimming. Personally, I am not in favor of her swimming, but there is absolutely no need or reason to discredit someone’s existence because she literally FOLLOWED the rules and is just competing in the sport she loves.

why can’t people be more like you? more compassionate instead of being vile and hateful

That’d be nice! But that’s the problem, the right-wing misinformation machine needs content and the content it needs right now is anti-trans stuff.

That same article popped up on my phone, and my going to it and reaction was pretty much a mirror of yours. The other mistake I’ve made is going to Swimming World articles. Early on, I would go to them when they popped up, but it is clearly the place for folks to migrate after hearing the issue of their “news” outlet of choice :/

Oh they migrate here too plenty, luckily SwimSwam just doesn’t tolerate ’em going buckwild in the comments. And for that, I’m incredibly grateful.

Very true…based on the Swimming World editorials, I think the lack of moderation is because there is heavy agreement there from the decision making staff and the commenters. Makes me glad we have swimswam.

I was unaware of this! Glad I haven’t been reading it since the 90s.

I’ve been disgusted by the SW articles and the comments that are not moderated.

Most of the commenters here are A finalists in the MISSING THE POINT Games.

5
-1
Reply
Inside Smoke
Reply to  Blackflag82

I can’t stand those SW articles. Not just cause of the content, but because those horrible cover photos of a generic pool with Lia’s roster pic slapped over top of it is beyond lazy

i can’t stand these people using emma as their pawn, and neither does she since she turned off her comments on the swimoutlet post but like roaches, they swarmed onto her snow day post

*Reigning world and Olympic champ gets 3rd in the event’s yards equivalent*
Media: ….
*Olympian gets second to a transgender woman in a totally different event than the one she medaled in at the Olympics*
Media: