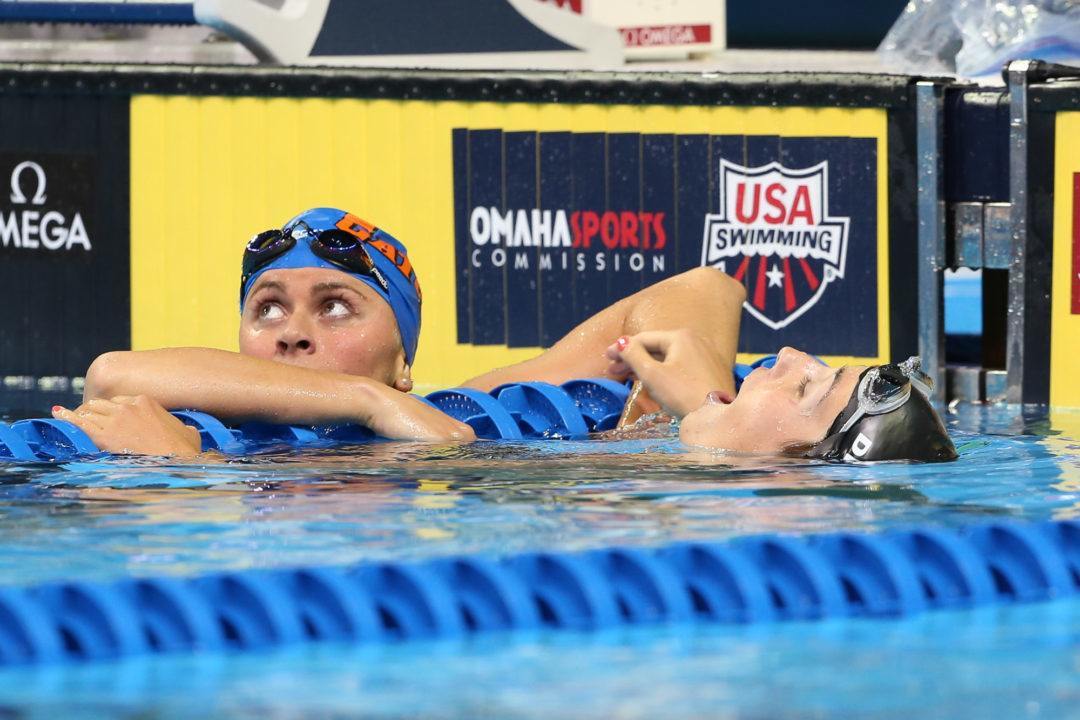 Elizabeth Beisel suffered an injury to her hand this morning after a collision in the warmup pool with another swimmer. Current photo via Tim Binning/TheSwimPictures.com

Elizabeth Beisel suffered an injury to her hand this morning after a collision in the warmup pool with another swimmer.

A source close to the story confirmed that she got x-rays and has fractured and sprained her pinky finger on one of her hands.

SwimSwam was unable to confirm when the incident occurred, however it’s suspected that Beisel’s injury occurred prior to her 200m freestyle swim.

Beisel is still entered in the 200m butterfly, 200m breaststroke, 800m freestyle, and 200m backstroke. Neither Beisel nor anybody in Beisel’s camp has given any indication of the severity of the injury or what her plans are for the rest of the week.

If she’s no longer able to compete, it’s almost guaranteed that she will still be headed to Rio. On the first night of competition Beisel finished second in the 400m IM. Once the trials are over the United States will complete their roster where all second place finishers are expected to be included.

Oh no who says swimming isn’t a contact sport?? I wish her a speedy recovery! Go Beisel!

Bet she is so happy that 1800 other swimmers are there crowding the warmup pool creating opportunities for injury.

Some months ago I injured my thumb at a fly finish. I still swam the 50 free the next day and it didn’t went well. The problem isn’t the pain, it’s the instability. I couldn’t catch the water as I was used to.

tape it to your ring finger and keep on swimming

Is this legal? I would think having tape between the fingers/toes could be construed to be an advantage.

Last time I checked you are allowed to tape no more than two fingers or toes together. I’m not certain if this is exactly the rule.

Yup. I taped some in January after breaking a finger finishing the 50 free.

I think there was a DQ at Pan Ams last year for this exact thing and it was appealed and overturned. You just have to notify the official and verify its a legit injury.

Definitely. There even has been a clarification in the taping rule to allow for such things as injuries. Claire Adams broke her hand in practice recently, had surgery and competed in the 100 back yesterday.

Did exact same thing in practice years ago, broke hand just below pinky. It happened in the Fall before finals and pre Christmas rest meet (took finals writing left handed and missed meet). Did a lot of kicking over the holidays and had a successful conference meet. She may be done for Trials but thankfully will get to swim in Olympics. Speedy recovery!

No need to risk further injury swimming the rest of her events. Get well EB!!

GREAT name! I wish I had thought to use that one! 🙂

Scott – I’m unaware of a time it’s ever happened. Especially keeping in mind that they go before 5th and 6th in the 100 and 200 free.

Poor girl was in the hospital for stomach virus last week as well. Hopefully all the bad luck is out of the way before Rio comes around. Amazing she still made the team. Go Beisel!!!!

I wasn’t aware of her being in the hospital the week before trials either… It’s incredible that she hasn’t mentioned any of this either. Hopefully she gets all of this bad luck out of the way now and we can see a new American record in Rio! We know she can do it especially after that Atlanta swim