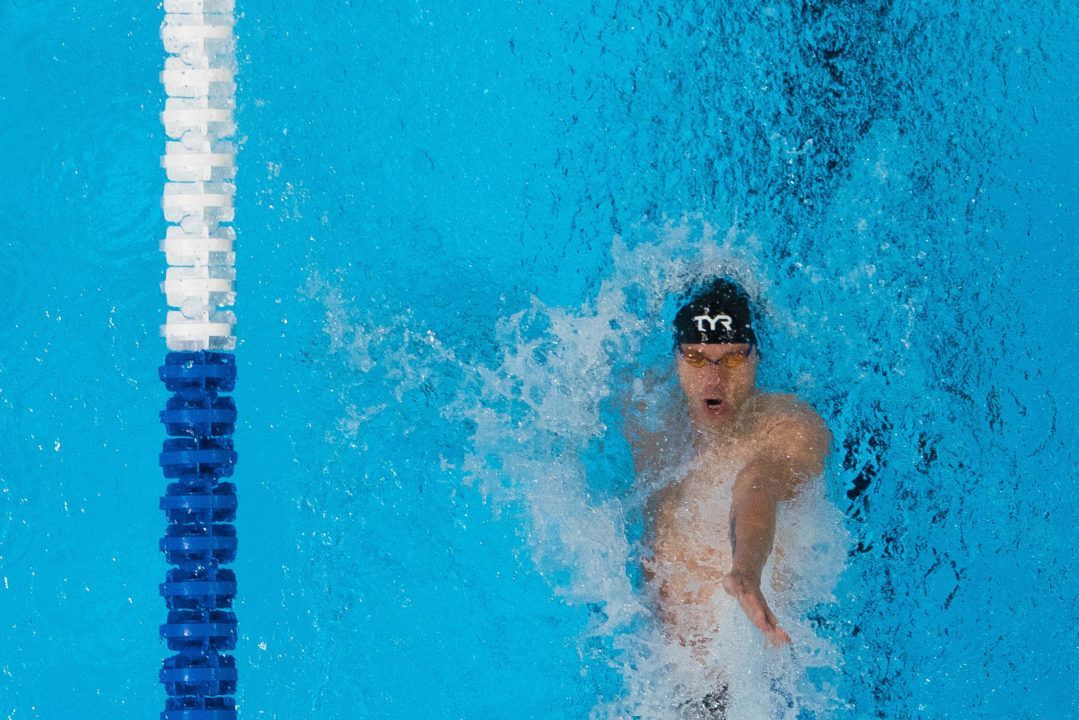 Katie Ledecky will be the top seed going into tonight’s 200 free semifinals after her very fast, but easily controlled top seed swim this morning.

Yesterday in the 400 free, Ledecky (who most likely is not fully tapered like she will be in Rio) swam a 1:56.28 200 split, so, clearly, she has her eye on taking the win in this final tomorrow night.

One of her likely challengers will be Virginia’s Leah Smith, who pulled out a nearly superhuman 400 free last night and qualified second in the event this morning.

Melanie Margalis of Saint Petersburg put up the third-fastest time this morning on the heels of a very successful Indy Pro Swim at the beginning of the month, and NBAC’s Cierra Runge has looked in good shape all week.

Texas men Jack Conger, Townley Haas, and Clark Smith will show off their mid-distance prowess in the final of the men’s 200 free tonight, after qualifying second through fourth yesterday.

But, 2012 Olympic gold medalist in the 800 free relay Conor Dwyer is the one to beat going into the final tonight, after coming in .21 ahead of Conger in the semis.

As always, despite his groin injury on day one, all eyes will be on Ryan Lochte in the finals of this event. Lochte qualified fifth yesteday, well under a second back from #1 Dwyer. 2012 Olympic gold medalist in the 200 back Tyler Clary came in just behind Lochte last night.

A ton of Olympic spots (a possible six) are up for grabs here in this final, so seventh seed Gunnar Bentz and eighth seed Jonathan Roberts (another Texas man) will have extra motivation to outswim the three Olympic veterans and the three top-four up-and-comers.

Last night, Georgia’s Olivia Smoliga became the fifth-fastest American in history in the 100 back, putting up a 59.16.

While some speculated that Franklin might drop the 100 back to focus on the 200 free (or vice versa), she has confirmed that she is swimming both events.

Yesterday, a reportedly unshaved Ryan Murphy threw down a wicked 100m backstroke to put up the top time in the world this year in the first semifinal. He was a 52.28 at the finish, just shy of his 52.18 personal best.

However, it is longtime-on-the-verge-of-stardom David Plummer who comes into the final with the fastest time, a 52.12 that ranks him the fifth fastest 100 backstroker of all time.

Like in the women’s 100 back, the 2012 Olympic champion is in danger of being unseated. Here, defending gold medallist Matt Grevers comes in ranked third from his 52.64.

The three were well ahead of the rest of the field, and the trio will battle it out tonight for the two Olympic slots.

There will likely be a changing of the guard in the women’s 100 breaststroke starting tonight. Although fourth seed Jessica Hardy, a 2012 double Olympic gold medalist in the 400 free and medley relays, and 2012 Olympian Breeja Larson are lurking in the field, the newcomers have the advantage going into the final.

And leading the charge will be defending NCAA champion Lilly King, an Indiana incoming sophomore who made a huge statement at NCAAs this year by taking down the short course NCAA, U.S. Open, and American marks.

Her biggest challengers will be Molly Hannis of Tennessee and SwimMAC’s defending Pan Am Games gold medalist Katie Meili.

Michael Phelps went a very easy 1:56.68 this morning, and, if he has any swim on lockdown this week, it’s this 200 fly. He shut it down this morning after the first 100, and today was the first time in the history of Phelps’ career that he’s ever taken the top seed after prelims at the Olympic Trials.

The real race here will be for second tomorrow, and it will be packed; the next nine swimmers came in within a second of each other. Tonight, the field will take shape a little more, but it will be a real race to make it into the top eight. Pace Clark, Jack Conger, Chase Kalisz, Kyle Higgins, Tyler Clary, Michael Kleuh, Adam Hinshaw, Justin Wright, Andrew Seliskar, Zach Harting, and Tom Shields all came in the 1:56.90 to 1:57.96 range.

2016 Olympic team member in the 400 IM Elizabeth Beisel was a no-show this morning after fracturing her finger in the warmup pool.

Thumbs up if you think NBC should stand for north Baltimore club. Lol

Wow, another one, really?

I’ll stop now. I thought it was funny

This 100 backstroke is gonna be legendary…

Hopefully it’ll be one of those races that goes down in swimming history. I’m excited for tonight. Both 200 frees are going to be fun to watch too

If this happen, I won’t sleep, I will not be able to hahahah

I feel like the men’s 200 free is either going to be spectacular or hugely anticlimactic.

The race between the Texas guys alone should be pretty good in itself. I feel like there’s a bit of a question mark over Lochte though. I think he’s got a pretty good chance of making the relay but the individual looks shaky. His last length yesterday looked like he was struggling after that long underwater off the last turn which he didn’t used to.