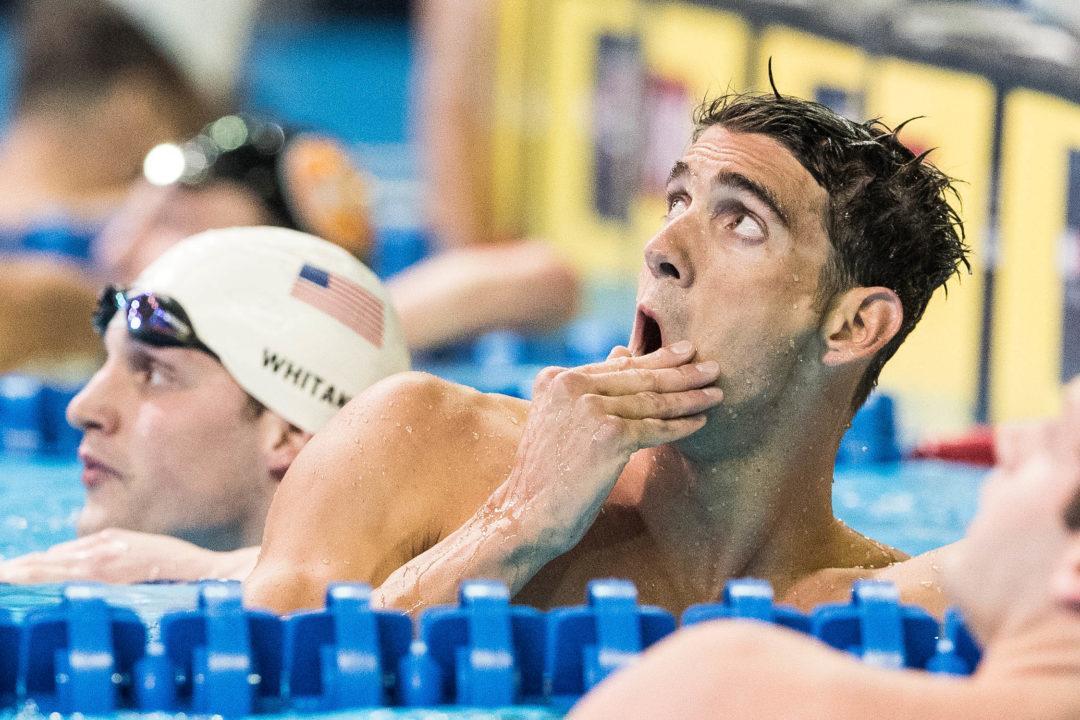 There are still firsts left for Michael Phelps in his career. Today, for the first time in his career, he took the top seed in the 200m butterfly prelims at an Olympic Trials. Current photo via Mike Lewis/Ola Vista Photography

There are still firsts left for Michael Phelps in his career. Today, for the first time in his career, he took the top seed in the 200m butterfly prelims at an Olympic Trials.

Phelps was a 1:56.68 to top the charts this morning, the second fastest he’s ever been in the heats of the 200m butterfly at trials.

Phelps has been the king of the 200m butterfly since he set the world record in the event in 2001 at the world championship trials in Austin, Texas.

His inauguration into the international swimming scene occurred at the 2000 Olympic Trials in the 200m butterfly where he ended up finishing second to Tom Malchow and qualifying for his second Olympic team.

Since then, Phelps has contested this event at every Olympic Trials, and has never lost since his second place finish in 2000.

Over the years, the times have gotten faster, albeit his 2012 Olympic Trials results were slower than his 2008 results.

A few interesting trends show up in the race data from Phelps’ 200m butterfly races at trials. Phelps has never gone into the semifinals as the number one seed until today. In both 2000 and 2004, he went in as the second fastest swimmer. In 2008 and 2012, he was third after the heats.

In 2000, thats very much indicative of him being the underdog. In 2004, 2008, and 2012, Phelps had such a heavy program at trials that he likely cruised the prelims since he was in such a good position to move forward to the semifinals and didn’t need to wear himself out.

This time around it infers that Phelps is either in amazing shape as he’s led the world to believe in his run-up to the trials, or he stepped on the gas hard this morning. Either way, he looked great, only tightening up slightly in the last 20-meters.

Another interesting correlation between Phelps trials results and his Olympic results takes place. Phelps has only won gold at the games when he’s taken the top seed after the semifinals. Although the relationship between these two results is a stretch at best, it’s an interesting trend.

The result could refer to how Phelps is feeling heading into the meet. In 2000, Phelps was largely the underdog which once again explains why defending Olympic silver medallist Malchow would be faster in prelims, semifinals, and finals.

Between 2004 and 2008, he was arguably in the best shape of his career. That would mean that he could cruise through the semifinals with an easy swim, which still topped the field. In 2012, it’s now known that he wasn’t putting his all into his training, which could explain how his “cruise” speed couldn’t top the field.

Now, with the hard work he’s claimed to put in, Phelps will once again race the semifinals of the 200m butterfly finals. If Phelps is first tonight, and ultimately makes the team, we’ll be able to see if the correlation between first in semifinals at trials and gold at the games stays true.

sorry for dissing your club the past few days. much respect. you guys do seem to be turning it around recently. lots of young talent is on the way. imho riptide might be the team to dethrone aquajets before you get the chance though.

That’s ok, I think we aren’t near Aquajets at the moment. And Riptide has a much better chance.

This is not good news for Chad Le Clos.

Hard to say. When there Prince swims this he typically doesn’t go much faster than 1:58/1:59 in the prelims because there’s no competition.

This made me snort

But The King is alive and well…..

Phelps need to watch out for Laszlo:
Cseh shot himself to the top of the rankings with a blistering swim of 1:52.91

Last year Phelps also went 1:52.9, and he has had a full year of training since. Laszlo tapered and now he has only 2 and a half months.

It was the Euro Championships. And until further evidence it is safe to say he tapered.

Do you really think he would do anything to jeopardize his probably only chance to win an Olympic gold? :DD
He has like a gazillion Euro gold (32 to be exact) and zero Olympic gold. What would you do in his place?
But if it’s what makes you feel less worried coming Rio, so be it :DD

1:52.91 was his best 200 fly time ever. 1:52.7 is suited. So, I highly doubt anyone could make that time NOT FULLY tapered but Phelps and Cseh. And Phelps is tapering for trials, he has done it before, double taper is possible. I say Cseh goes 1:52.3

This will be an interesting challenge for Phelps; is this the fewest events he’s contested at Trials since 2000?
Probably more time to focus on each stage of each event rather than running between semis, finals, warmdown, etc. A focused Phelps is a scary thought for Le Clos.

don’t forget scary for cavic as well. as a matter of facts its scary for all of his competition

Vote Up4-3Vote Down Reply
JP Input is too short