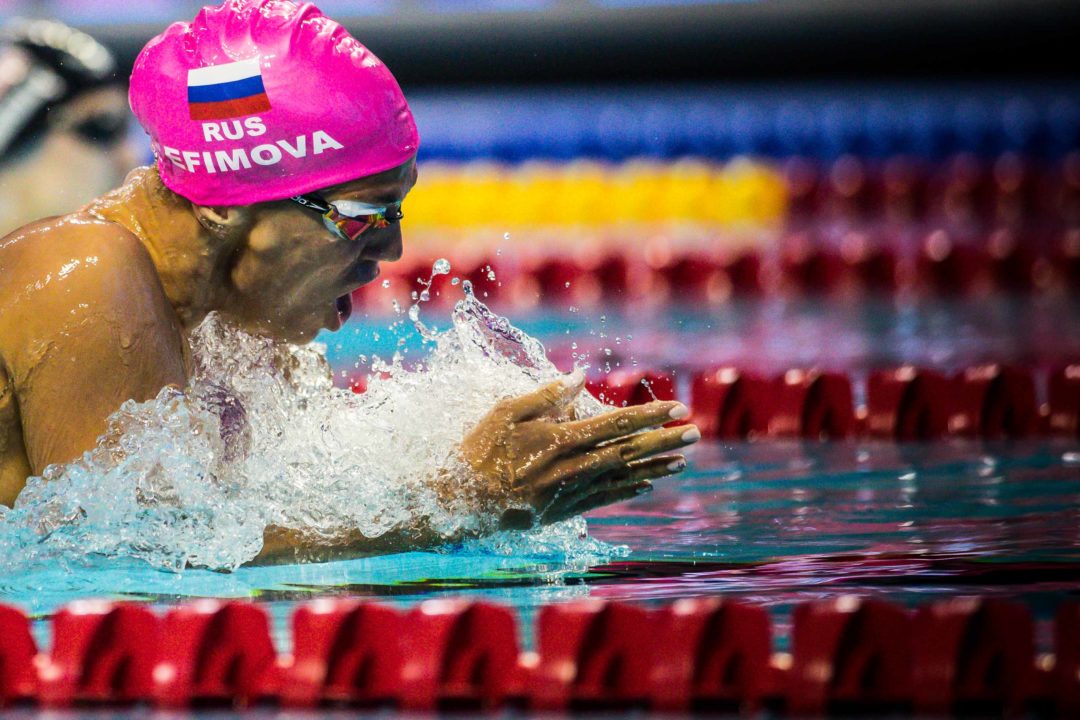 This 2:21.86 may be the last 200 breast we see from Efimova this season as she has not qualified to race the event in Tokyo. Archive photo via Jack Spitser/Spitser Photography

The 2021 Mare Nostrum Series has come to an end with the conclusion of day 2 finals at the 3rd and final stop in Barcelona.

Two stars of Olympics past both swam times in hallmark events that are their fastest since the end of the 2019 season. Mireia Belmonte, the defending Olympic gold medalist in the 200 fly and bronze medalist in the 400 IM, swam her best 400 IM since August 2019; and Yulia Efimova swam her best 200 breast since winning gold at the 2019 World Championships.

Russia’s Yulia Efimova won the 200 breaststroke with a 2:21.86, marking a season-best for her in the event. The swim is an improvement upon her bronze medal-garnering swim at 2021 Euros where she hit a 2:22.16.

While she was a bit slower than her PB and Russian record of 2:19.41 from 2013, the swim moves Efimova up to the 6th fastest position in the world. That places her ahead of fellow Russian Maria Temnikova, and just two tenths behind fellow Russian Evgenia Chikunova, who recently qualified to race the event for Russia in Tokyo. That means that the 6th fastest woman in the world so far this season won’t be racing the event in Tokyo.

Another impressive swim came from Hugo Gonzalez who posted a 1:56.31 200 IM to lower both the Spanish national record and Mare Nostrum meet record. Gonzalez held the previous Spanish record at a 1:56.76 which he set at the 2021 European Championships to earn himself a gold medal. The former Mare Nostrum record on the other hand belonged to Japan’s Kosuke Hagino at a 1:56.82 from a 2015 version of the meet.

That was Gonzalez’s second Mare Nostrum meet record of the week, adding to his 53.08 100 backstroke mark from day 1.

In the women’s 400 IM, two legends of the event went head to head in the form of Katinka Hosszu and Mireia Belmonte: both of whom were on the 2016 Olympic podium in this event.

The swim for Belmote on the other hand was a 4:42.17 for silver which marks her fastest swim in the event since the 2019 FINA World Cup Series stop in Tokyo, which happened just a few days after the end of the World Championships. While she was just 4:42 for 13th place in Gwangju, less than a week later at the World Cup she managed to drop 8 seconds and go 4:34, but hasn’t been close to that time since.

Another big swim on day 2 of the meet came from Arno Kamminga in the 100 breaststroke. Kamminga delivered a 58.18 to win gold in the event, coming within 0.03 seconds of Adam Peaty‘s 2019 Mare Nostrum record of 58.15 from 2019. Kamminga was a bit slower than his recent 58.10 at the 2021 European World Championships which gave him the silver medal for the Netherlands behind Peaty’s 57.66.

Kamminga became the second-fastest 100 breaststroker in history and second only to Peaty to swim the event under 58 seconds a few weeks before Euros with a 57.90 Dutch record. Additionally, on day 1 of the meet Kamminga delivered a 2:07.23 200 breaststroke to win gold and set a new meet record.

Hugo breaking out at the perfect moment! 200 IM medal watch for him.

Is Efimova actually not swimming the 200 Breast in Tokyo? After getting Bronze in euros and now going 2:21 surely she has to be picked over Temnikova, right?

Here’s what the Russian head coach send in May:

You believe the Russians? What if she goes sub 2:21?

You asked a correct question. Who told that the selection process via one meet three months prior of OG is the fairest one. It’s not better or worse than selection for World Championships one year in advance. There are actually plenty of different selection processes implemented by different national swimming associations and there is no criteria can be used to choose the one that is “the best”. The only concern here is which one is less prone for corruption. And there are plenty of reasons to believe that the Russian selection system isn’t the one.

easy to swim fast as you have nothing lose, winners win when needed, sore losers whine months and months

I know people hate on efimova for doping but I still do wish she was swimming it just cuz she has such a nice stroke and I’m overall just a fan of fast swims.

A large number of people just hate Russian athletes in general. Even if it’s just some members that have been caught out by drug trials or anything scandalous

I don’t like efimova, but I’m a huge chupkov fanboy.

Lovely stroke, but I care more about the women who’ll potentially finish 9th and 4th should she swim. An Efimova medal would be bad for the integrity of our sport

If she were ugly no one would be as forgiving.

It’s funny how the SS comment crowd will never let this go with her but will throw every possible excuse out there when a US swimmer tests positive.

Right ? Efimova’s doping comes up in every comment section of articles where she’s mentionned, but when it’s Lochte it’s just times, hoping he’ll make the US Team and trying to predict how fast he’ll go because “he’s slow in season” and “he’s a taper beast”. Some people would even want to see him in the ISL…..
I don’t have any issue with Lochte in particular, he’s a great athlete. It’s just the way both cases are dealt with that bothers me.
I’m all for zero tolerance and heavy testing, but I know that wouldn’t work well with the finances (and the athletes’ well being, imagine getting stung repeteadly in the arm by someone at 6am before morning practice…)

Are energy bars and melodium from the health food store any different to what Team GB got up to: https://www.bbc.co.uk/sport/olympics/53379876
It needs to be viewed in perspective. She didn’t do the “hard stuff” like some who now get a free pass on here.

The Cal guys (Gonzalez here, the guys at Wave 1) are swimming really well. Bodes well for the wave 2 guys.

Judging from his swims this weekend, it seems like Milak’s coach is probably having him get some speed work in this month before the taper starts!