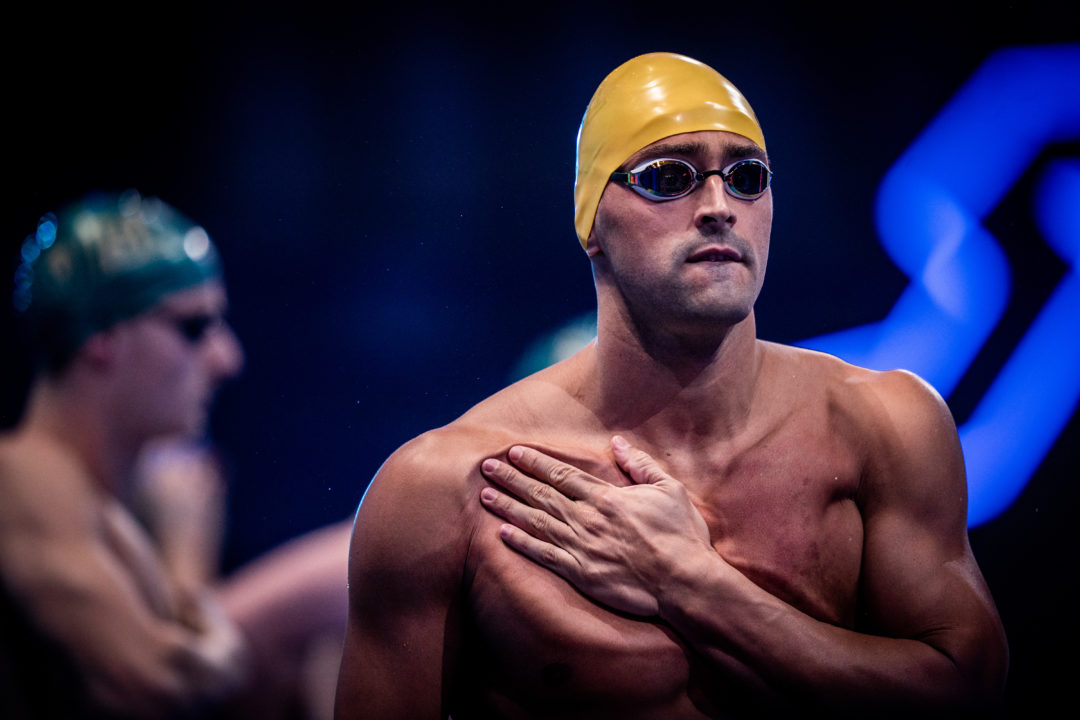 Dylan Carter completed his sprint trifecta with his third Triple Crown — and ninth gold medal in nine races at this year’s World Cup series — in the 50 fly.  Archive photo via Courtesy of Mine Kasapoglu for ISL

Dylan Carter completed his sprint trifecta with his third Triple Crown — and ninth gold medal in nine races at this year’s World Cup series — in the 50 butterfly on Saturday night in Indianapolis.

Carter clocked a time of 21.99, just .01 seconds off his personal best from the 2021 Short Course World Championships last December. The 26-year-old from Trinidad and Tobago reached the wall just .14 seconds behind the world record set shared by Brazil’s Nicholas Santos and Hungary’s Szebasztian Szabo.

“I am so happy — I am over the moon,” Carter said. “The pressure really started to mount this weekend, but I really felt like I could do it. I think it is massive for Trinidad and Tobago. The Olympics and World Championships is about who is best on that day, but the World Cup is about who is better for an extended period of time. It is really a phenomenal feat of not just fast swimming, but endurance. It is a big step for our sport in the Caribbean.”

“These are some of my best friends, Chad and Marius here,” he added of the silver and bronze medalists. “Marius and I lived together prior to the Tokyo Olympics, so we’re really, really close. It’s so fun racing these guys every night.”

Carter’s performance is the fastest in the world this year ahead of the 22.21 posted by le Clos at the first stop of the World Cup in Berlin.

“It is a massive step for me. I have always felt like I have had massive potential, but there was always something missing,” Carter said. “I came home after this summer and went to my local gym. The amount of people who asked me if I was going to retire — I swam good times but people thought I was done, that I was never going to break through. That really drove me and that is part of the results you see here.”

Carter called his recent run of dominance in the 50s his “second career” after previously specializing in longer-distance events.

“I have always swam up to 200, but I always wanted to have a bit of a second career, which is the 50s,” he said. “I always had a good 50 fly. It was always good for a 200 guy. I wanted to put it together and see what I could do. Training in Trinidad, I am training on my own a lot. It’s fun. It is a lot more fun than training for the 200. Swimming in a way that is sustainable and when you are happy, that is when you can see your career in front of you.”

Obviously Olympic sports are mainly once a year championship things, but who can sustain it over weeks/months in these meets make it more of “who can show up to work and perform everytime” like pro baseball or rugby or soccer, or even a regular job. If Dylan Carter or Nick Fink had a jersey I’d rock it. Super cool stuff, and glad they’re getting paid.

Shouldn’t it be a sprint “quadri/tetra/four fecta” rather than a trifecta ? Dylan has done an amazing job but the 50 breast is still part of the 50s ! He’s not quite done in the sprint ing domain

Beata, Dylan, and Nic all sitting pretty with 6 figures

Prolly hurts more for Shaine to lose 85k by one terrible prelims swim.

That’s not really true, though. He missed two finals in Germany.

Even if he had qualified, because Carter got so many FINA points, Casas would have needed to win and get at least 964 points for his third event in Germany. Out of the 11 finals he swam at the world cup, he only got that many points twice, and Germany was his slowest stop.

Seems pretty unlikely he would have won it overall anyway tbh.

This doesn’t look correct to me. He lost by less than 8 points, simply making the final in the 100 IM and winning it with a 900 point swim would have gained him more than 8 points.

So if he did what he did in Indy, he wins. That’s not a guarantee. He was a touch faster overall in Indy than in Berlin, and Thomas Ceccon was racing in Berlin. But Casas would have been the likely winner, that’s for sure.

I have never seen Dylan Carter and the Gigachad meme guy in the same room at the same time.