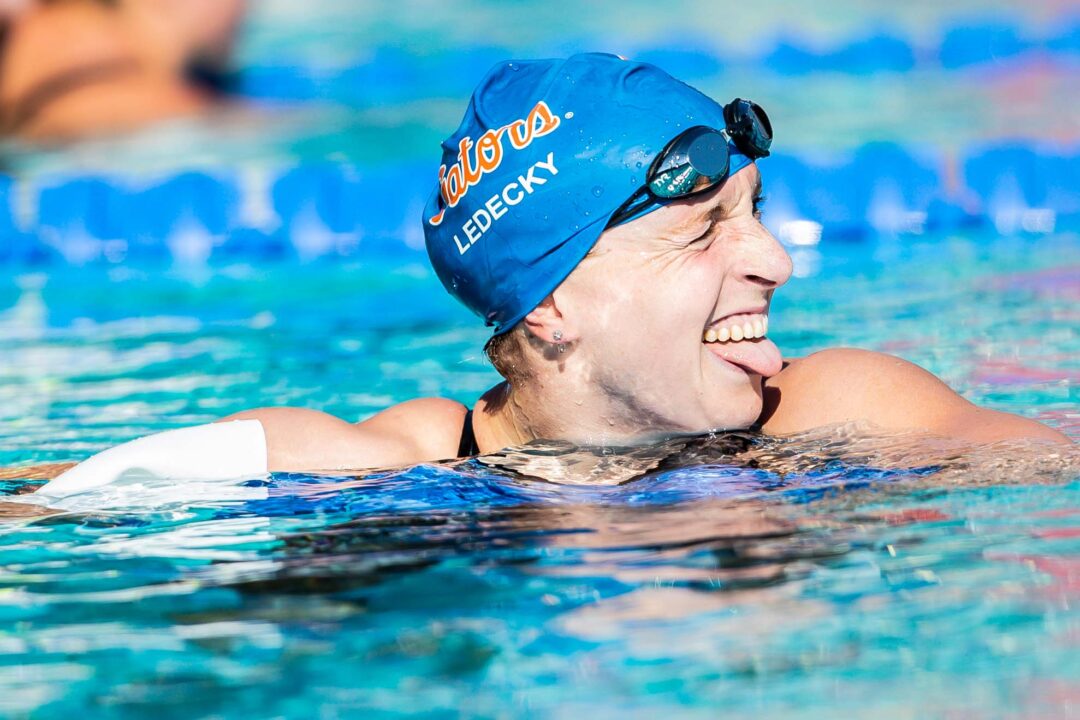 Ledecky came close to breaking the 800 free world record last week in Toronto on her 1500 split, but she made it official tonight in Indianapolis. Archive photo via Jack Spitser/Spitser Photography

American distance star Katie Ledecky crushed the 800 SCM free world record on Saturday afternoon in Indianapolis by nearly two seconds. At one point in the race, Ledecky was about three seconds ahead of the world record line, but she ultimately touched the wall at 7:57.42. She beat the previous mark set by Spanish Olympian Mireia Belmonte at the 2013 FINA World Championships in Barcelona.

This was Ledecky’s second world record-setting swim of the 2022 FINA World Cup after she destroyed the 1500 free record in Toronto. Her 800 split during that race was 8:00.58, within 1.3 seconds of Belmonte’s world record. “I was putting a lot of pressure on myself after last week,” Ledecky said after the race, “so having all these fans here to cheer me on meant a lot.”

Second-place finisher Summer McIntosh also had an incredible race, smashing her own Canadian national record by six seconds with a time of 8:07.12. USA’s Leah Smith finished in 3rd place to round out the podium (8:12.01).

Amazing to see the reaction from Ledecky after the race. She had the look of pure happiness and confidence. That is the kind of energy that will ooze into 2024!

Did this swim make Ledecky the oldest woman to ever set a distance freestyle record? Just did a quick scan of the world record progression for the women’s 1500 free, both long course and short course and the overwhelming majority of women were in their teens. There were a couple women for whom there was no Wiki entry. But the closest one whose birthday was listed was actually quite recent, Sarah Kohler, who set the 1500 SCM record at age 25 and five months. Ledecky is around two months older than that.

Ledecky broke the world record by 1.92sec. Is it a lot or not?
Compare to her superiority in long course – 9sec – her advantage in short course doesn’t look dominant. But could it be that the record of Mireia Belmonte was exceptional? At least it stood unbroken for 9 years. Maybe.
But again in LCM Mireia was 8:18 swimmer and in her turn she broke the previous world record by not that much – 1.72 sec. And this record was set by Camille Muffat one year earlier in 2012. In 2012 Muffat wasn’t even in the Olympic final in 800 LCM event. Under this angle the record of Mireia Belmonte is looking soft.
But maybe this… Read more »

Great swim. Can’t believe Smith is doing the Ben Proud start in an 800.

What makes it a “Ben Proud start?”