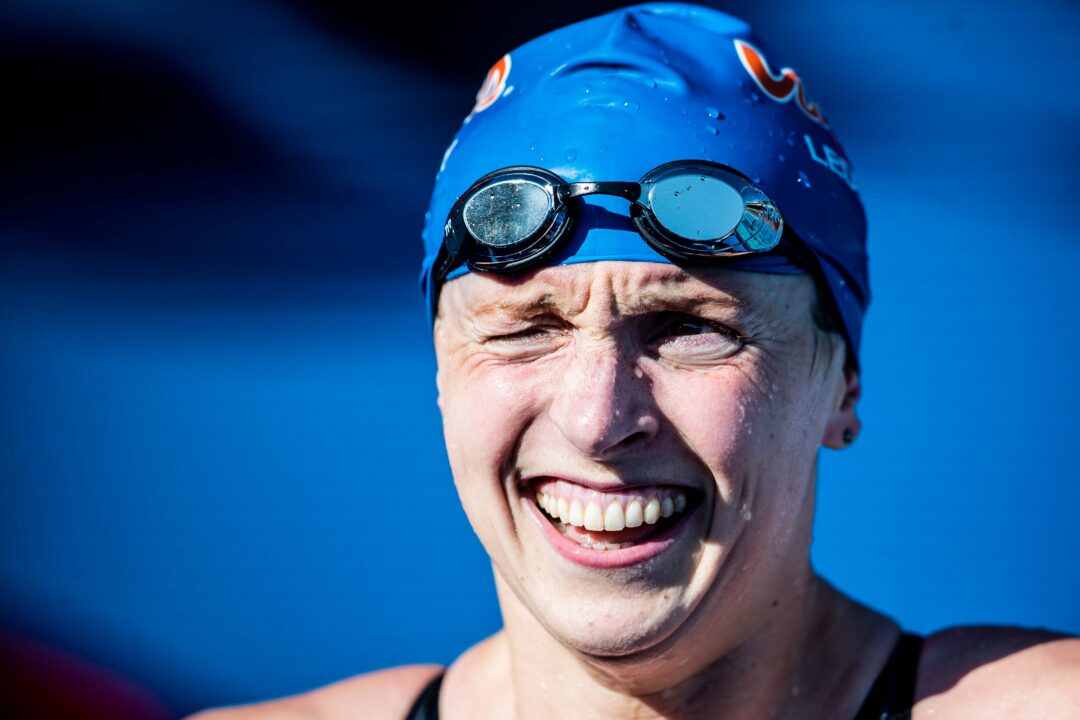 Katie Ledecky broke the 1500 free World Record in her first-ever attempt at the event on Saturday. She very nearly took out the 800 free record on the way. Archive photo via Jack Spitser/Spitser Photography

The World Record by Ledecky earns her a $10,000 bonus from FINA.

Ledecky was already the World Record holder in long course at 15:20. Given that most swimmers are 2-3% faster in the short course 1500 than the long course (Wellbrock, for example, is 24 seconds better), that Ledecky was able to break this record by so much is not a surprise, though none-the-less stunning.

Unlike the 400 free World Record that we saw go down earlier this week in China, the 1500 is something that a lot of very good distance swimmers have swum very seriously in short course. Besides Wellbrock, the all-time top performers list includes names like Mireia Belmonte, Lotte Friis, and Simona Quadarella.

But none of those swimmers are Ledecky, who in the 1500, more than any other race, is heads-and-shoulders ahead of anybody else in the history of the sport.

The record-watch was on early. By 600 meters, 40% of the way into the race, she was already 5 seconds under the World Record.

Notable things about this record-breaking swim:

As for next week, how about some deja vu?

Since name of Sarah Wellbrock was brought to the discussion then there is an interesting point:
Personal best at 1500m
LCM – 15:42; 27yo
SCM – 15:18; 25 yo
Diff – 24sec
Ledecky competed at 1500SCM for the first time in her career. Nothing to compare with. But if the Sarah Wellbrock’s example shows how results differ in short and long pool at highest level of competition then should’ve we expected from Ledecky sub 15min result?
Should we look at her yesterday result as 15:30 low LCM performance?

Did you take into account that Katie Ledecky may have not tapered for 2022 FINA World Cup?

Difficult to remember that she is still only 25!

Splits:
In her record setting race Katie Ledecky had no advantage over Sarah Koehler at last 400m. We saw the similar picture in Tokyo and practically at all her races at all distances last years. Very strong first part of the race and not that strong finish. And it isn’t like Ledecky’s general style of racing. When training under Bruce Gemmell the racing approach was quite an opposite. Moreover the coach required her to follow strictly the race plan for the first two thirds of the distance and only then to do whatever she feels like depending on circumstances of the race. At her record setting races then the final stage of the races were the most remarkable. The… Read more »