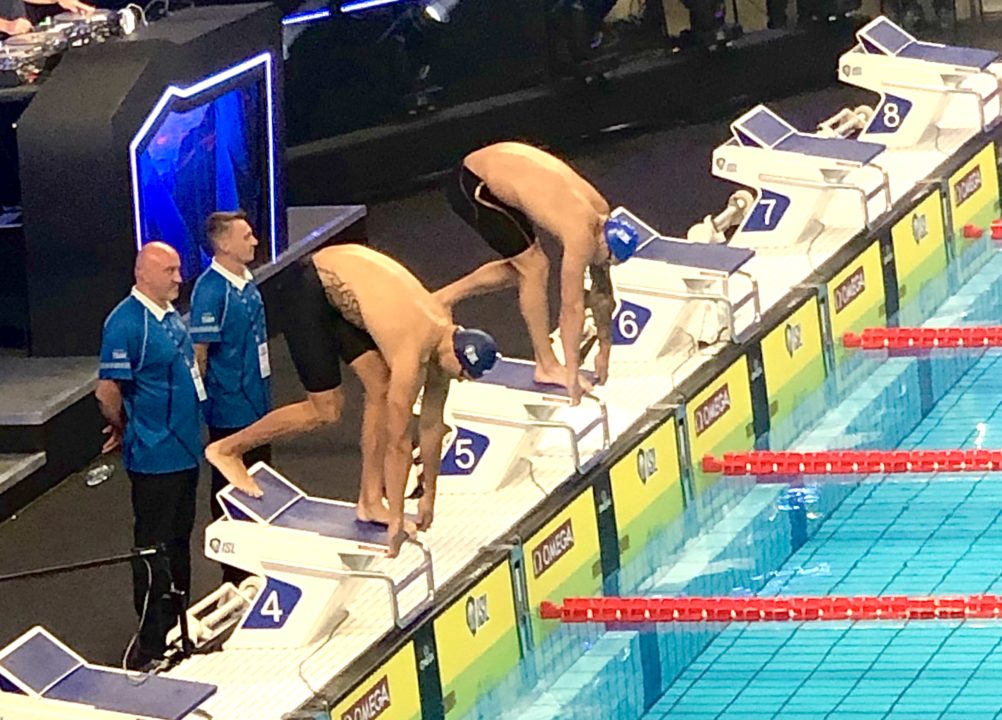 Florent Manaudou and Caeleb Dressel had a thrilling 50 free skins race, yet there were major differences in underwaters that varied during all three swims. Current photo via Giusy Cisale

During the men’s 50 free skins race at ISL Group A Match 2 in Naples, it was the long-awaited showdown between French Olympic champion Florent Manaudou and American sprint sensation Caeleb Dressel.

Sports scientist Robin Pla of INSEP, the French National Institute of Sport, was able to break down underwater distances and speeds off the start and turn for all of Manaudou/Dressel’s three swims. According to Pla’s observations, he tweeted that, “Main differences between [Manaudou] and [Dressel] are about underwater skills and the capacity to maintain them over rounds.”

One of the initial differences between Dressel’s underwaters and Manaudou’s are the speed and distance achieved off the turn. For any sprinter, the start and the turn are just as important as the actual surface swimming. However, many still struggle to maintain the initial momentum and speed capacity off the start and carry it into the turn.

In the same manner, Dressel is in much better lactate control with his time consistencies and ability to maintain underwater distance/speeds. A specific example of Dressel’s lactate control is his underwater speed after the start in comparison to Manaudou’s. For Manaudou, his speed decreased by -0.21 m/s and another -0.15 m/s as each 50 progressed. Dressel, on the other hand, dropped -0.14 m/s after the second 50 yet maintained the same speed as lactate began to settle in.

Overview of males Skins race in Naples yesterday. Main differences between @FlorentManaudou and @caelebdressel are about underwater skills and the capacity to maintain them over rounds ! #ISL pic.twitter.com/AvlHrZO2yr

Ryan Lochte on his back should be up there too

Did you just give Caeleb Dressel a compliment?

Ole’ Longhorn, Ol’ Longhorn’s Mexican brother, has taken over with his Dressel obsession

Not to be confused with my Norwegian brother, Ole Longhorn.

I’m just resting up. When people start predicting 12 gold medals in a few months, I’ll be sufficiently rested enough to take on the SwimSwam illuminati.

Fastest underwater in history has to be Florent’s when he went 22,2 in the 50 back, he absolutely demolished the rest.

Or Dressel’s SCY 50 free that was absurd.

Wonder what Natalie Coughlin’s on her back was? Or Shields?

I feel bad for anyone trying to race CD in Skins.

It’s not a short list either, though. Last year, around 30 men in the world did it – and that doesn’t account for American swimmers who very rarely swim SCM. I would guesstimate that the number of guys globally who can go 21.3 fresh in any given year is around 45 or 50.

What would you estimate it is at mid-season? I know some folks might be more rested than others depending on their training, but I’m curious out of the 45-50 guys, how many could pull off a 21.3 outside of their big meet? For example, I’d say there are probably only a few guys in the NCAA who could pull off a time like that outside of conference and NCAAs, but maybe I’m underestimating?

Popov used to train by doing massive sets, if anything he trained more like Dressel.

If you actually look at what Troy has published for Dressel’s training (and he recently did), they’re not massive sets. Lots of power stuff. It’s not training for a 400 IM by any stretch of the imagination. If he trained like that his 200 LCM free would be WAY better than it is, but his 50 free would suffer.

Depends what you mean by massive. He swam very long distances — for a sprinter — very, very slowly with perfect technique. He wasn’t doing Phelps- or Ledecky-type massive sets. Kind of insult to the guys/women who do legit massive sets.

Anyway to get the stats for their speeds on top of the water? Would be interesting to see the data on how much faster the underwater is.

I’ll give you one stat on top of the water: Chalmers made up half a body length on Dressel in the last 25 meters at Worlds.

Yeah that was awesome