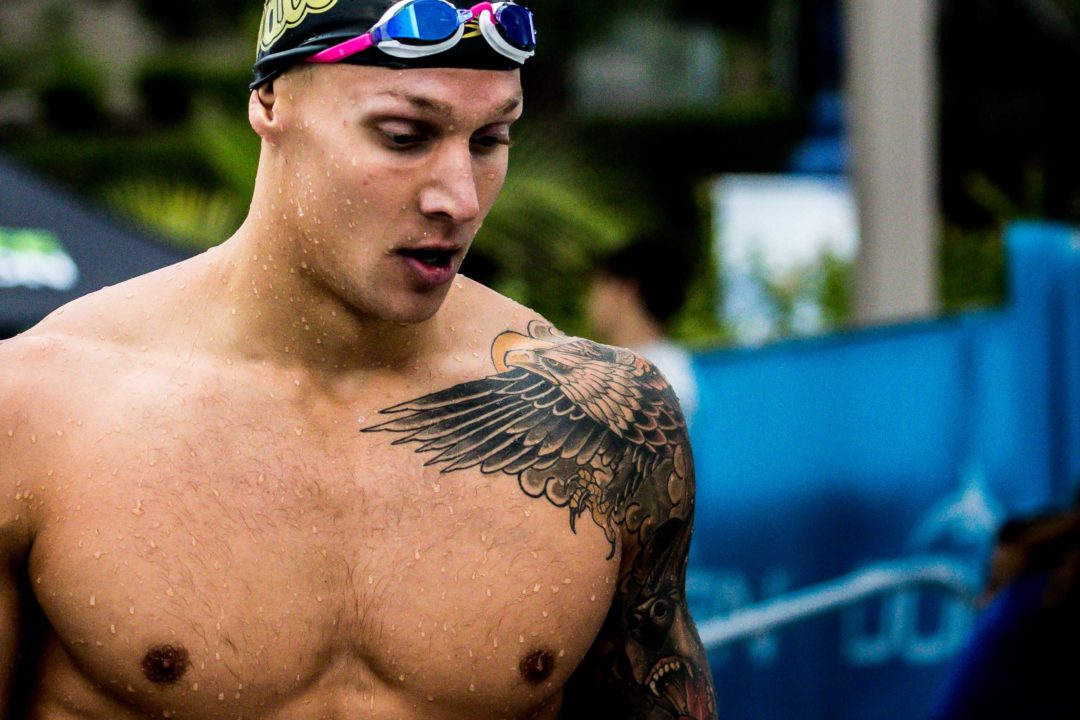 Dressel won the 400 free B final, dropping 7 seconds from his lifetime best set back in 2012 when he was still in high school. Archive photo via Jack Spitser/Spitser Photography

Teammate Ryan Lochte had swum a 4:08.14 in the 400 free prelims, but didn’t swim the race in finals. His only swim tonight was the 100 back, in which he placed 2nd in 56.20 behind fellow Florida postgrad Bayley Main (55.74). Main was just 5 hundredths off his best, which stands at a 55.69 from 2017 per the USA Swimming database. Canada’s reigning Olympic bronze medalist Kylie Masse dominated the women’s 100 back in 59.74. That’s the 4th fastest time in the world this year.

We saw a Pac-12 Champion and SEC Champion battle in the men’s 400 free final. Gator Swim Club’s True Sweetser, who is currently taking a redshirt year from Stanford, held off Mitch D’Arrigo on the final 50. Sweetser touched just 2 hundredths ahead in 3:55.22.

Laker Swim’s 14-year-old Addison Reese made a huge drop in the 200 fly, breaking 2:18 for the first time in 2:15.84. That was a best by over 2 seconds and she’s now just over a second away from the trials cut. Taking 2nd in that race was Sarasota’s Emma Weyant in 2:16.23. Her finals time beat her former best from last month’s Knoxville Pro Swim Series by 2 seconds, though she had already swum a 2:16.92 in prelims.

Weyant came back to win the 400 free, posting a 4:12.01. Behind her, 14-year-old teammate Addison Sauickie qualified for Olympic Trials in 4:15.56. She had never broken 4:20 before this meet. Emma’s younger sister Gracie Weyant, 14, had already qualified for Olympic Trials in the 200 breast. She’s now even further under the mark, swimming a lifetime best 2:31.70 to win the race.

Any full body photos of Lochte?

Come on dude. No one looks ripped in their late thirties (except Schoeman and Santos).

A lot of former or current athletes or simply physically active people do. Being in your 30‘s doesn’t necessarily change much about how your physique looks, moreso how fast you are.
I wouldn’t be surprised if lochte never gave up his pizza and chicken wings Friday or whatever day it was lol (he said in an interview that it was kinda like a family tradition to eat that stuff every one day of the week)

I could have sworn that back in 2010-2011, when Lochte was at his peak, I read various articles about how he had given up junk food. I’m a little suspicious when I read it now.

You should go to a master’s nationals and check out, say 75 year old Rich Abrahams or 66 year old Doug Martin. They could rip your lungs out, Jim.

From the stands, Lochte looked fit. It was funny seeing him in a neon brief next to all the black tech suits.

you saying he didn’t wear a tech suit the whole meet? Now THAT is encouraging.

Mike o hearn at age 51 is a monster

love dressel, but this proves that Phelps is GOAT for real….phelps only missed dressel’s 100 free time by 0.45, but also went 3:47(or 8?) in the 400 at a meet in santa clara and he probably didn’t give 0 s** about it. really, not to take away from dressel, but if we’re gonna start getting excited about men going 4:00, i thought i’d mention that

I don’t think anyone seriously thinks Dressel is challenging Phelps for the title of GOAT.

There certainly are some crazies saying such things in comment sections.

I think Dressel will ultimately be in the conversation for best *sprinter* of all time. But I don’t think any objective observer will argue that he is a better overall swimmer than MP

If you include the mixed medley relay, he has a shot at 7. 3 individuals, 4 relays.

By the way, Phelps made a really serious attempt at adding the 400 to his event lineup. He and Bowman tried to get him to fill the empty spot left by Thorpe in the event. Eventually, he swam it at Worlds but finished 18th in prelims and never really swam it again at a taper meet.

Not saying that Phelps isn’t the best ever. He absolutely is. But he was a guy built to swim the 400-meter distance (as he was the 400 IM champ during the period) who was really focusing hard on making the 400 free one of his top events. He hardly “gave 0 s*** about it.” Hell, he flew to Australia and spent a summer… Read more »

Swim geek, 3:47 was Phelp’s best time, and at the time he swam it the American record was Klete Keller’s 3:44.

Fun fact, the 500 yard free is now the only 17-18 record that phelps has. Out of all the events, he still owns that one.

I don’t agree. Phelps swam the 400 free (and didn’t make the final) at Worlds2005, after his first depression post-Olympics and Dui, and he wasn’t absolutely in good shape, like other results (his time in the 100 fly for instance) showed. So I don’t consider that a serious attempt at adding the 400 free to his event lineup. If Phelps had swum the 400 free at Worlds2007 or Olympics2008 I think that he would have been way faster. But five individual and three relay events were already a monster schedule, so impossible swimming also the back distances or the 100 (at Worlds07 Phelps leadoff was the best time in the 100 free) or 400 free.

Just to clarify: I don’t agree with Jack’s assertion that the 18th place at Worlds05 went after Phelps was “really focusing hard on making the 400 free one of his top events”. After Athens2004 Phelps didn’t have a good training and in that 400 free heats at Worlds05 he swam 3.50.53, when, like Jack himself later noted, already two years before (and after the Worlds and amidst a busy program at Nationals in Maryland when he broke the 200 IM WR and swam at a wonderful level so much races ) Phelps swam 3.46.73. So, it looks pretty obvious that Phelps’ potential in the 400 free was much higher than what expressed at Worlds05, but we couldn’t verify how much… Read more »

Did he swim faster at WC trial? If not and he still qualified to represent US, the US competition was pretty weak.

I am not sure the attempt was every that serious. It was in 2005, from what I recall, and Phelps tended to train less seriously in the year following the Olympics. Same was true in 2009. I think if he had been really serious about it, he would have made finals at the 2005 worlds. It is true that he didn’t make it out of the prelims, but he only went 3:50 and he had gone significantly faster before. I think he just bonked due to a lack of fitness. Kind of like his 400IM in London.

I think people just forget how good dressel is in 50’s and 100’s and still can swim decent times on 200. If u compare to phelps, he was swimming 100-400 and was really bad at 50. I think dressel has huge potential to be the GOAT. There is not so many swimmers on mens side who can be fastest spinter and also have that versality in many events… for example winning 50free and swim 100fly world record only 20min between is waay more impressive than winning 200 and 400

Well sure, I guess Dressel has potential to be the GOAT? Only 13 individual Olympic golds to go. Plus Phelps held five individual LCM world records concurrently across three different distances and three strokes, and among other things was 0.03 off the 100 back WR in 2007. There are too many superlatives to list when it comes to Phelps. Dressel is great, but he has to demonstrate his dominance more imperatively over at least three more Olympics to even be in the conversation for GOAT.

Stop this nonsense. When Phelps was 19 he won 6 Olympic gold medals.

If Dressel widens his event list to include a 200free or 200IM, and wins several individual gold medals in 2020, 2024 AND 2028, he’d still only have 3 dominant Olympics to his name compared to Phelps’ 4. He might go down as GOAT sprinter, but doubtful to supplant Phelps as the overall GOAT.

FINALLY! WE HAVE PROOF! smh

Why is that insane? Or even surprising?

Maybe this would be a good time for Swimswam to do an article on Lochte’s best in-season swims for comparison. There were times he wouldn’t make Grand Prix finals before destroying at Worlds and Olympics. He’s one of the biggest taper swimmers ever.

For comparison, Lochte went a 4:07 400 free in prelims and a 55 100 back during a sectional meet in March of 2011 (according to collegeswimming). Considering he’ll make the same drops after taper (which he definitely can) he’ll be close to top form at trials.

But 2011 was in the midst of incredibly heavy training under Troy. He had such an insane base of work that his tapers were massive. I don’t think anybody really knows for sure, but with a wife and two kids, I highly doubt he has the time to train to the base he had in 2011, meaning he is probably not as beat down at these in-season meets as he was in 2011 and his taper will not be coming so far down.

Absolutely agree. He was also doing that strongman stuff on top of Troy’s work. He’s said in interviews that he can’t take the same pounding and is taking days and practices off for recovery.

I think dressel would win tapered.

In a women’s suit, he wouldn’t. Not enough room in the stall to put it on.

But would you help him zip up if he were to try?

The real question here is, can Caeleb Dressel grow a beard?