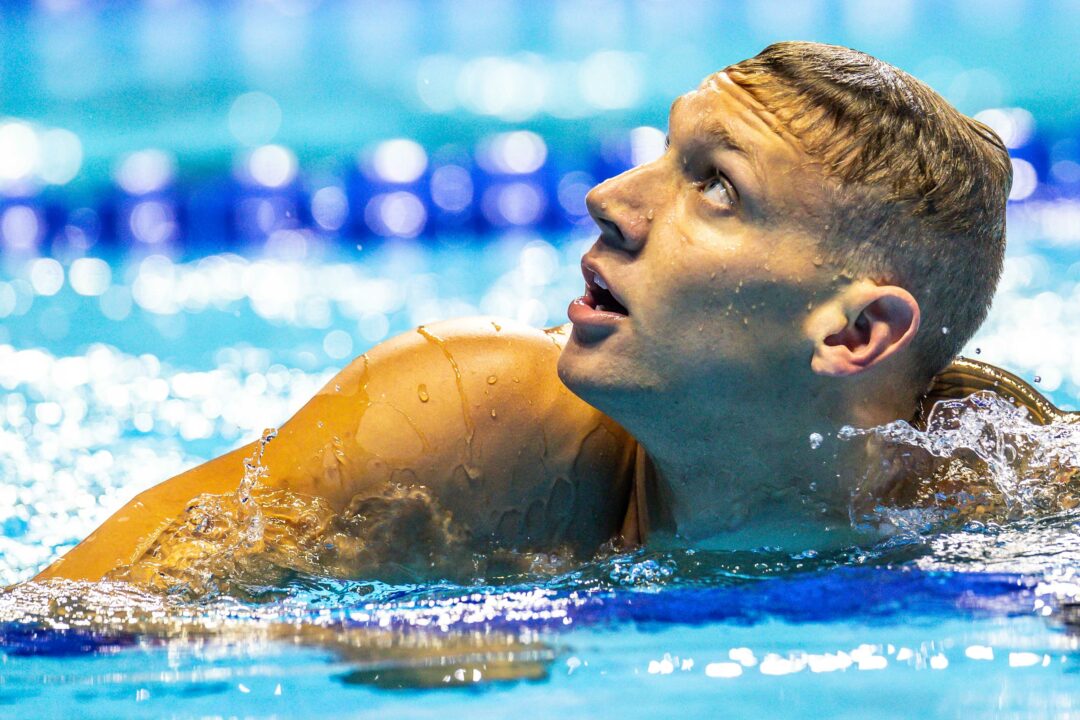 Caeleb Dressel is set to join the American men in the 4x100 freestyle relay, leading-off for the team, which will be chased by the Italians. Archive photo via Jack Spitser/Spitser Photography

Predictably, Caeleb Dressel will join the US men’s 400 freestyle relay during this morning’s final. Dressel, the fastest man to ever swim the 100 freestyle in a textile suit, holds a personal best of 46.96.

Individually, Dressel will also be chasing the 100 freestyle world record, as he is leading-off the American Relay. Dressel’s best time of 46.96 currently stands just .05 shy of the 100 freestyle world record of 46.91. Notably, Dressel’s Australian counterpart Kyle Chalmers won’t be able to chase that record today, as he is anchoring his country’s relay.

Italy looks to be the top challenger to the Americans after shattering their national record this morning. The team will replace Santo Condorelli with Thomas Ceccon in tonight’s final, keeping the remainder of the order the same as prelims. Ceccon holds a personal best of 47.98 in the individual 100 freestyle, and should provide a slight improvement over Condorelli’s split of 47.90.

Australia, France, and Russia should also challenge for a medal here. The Australians will maintain most of their lineup from the morning session, only replacing Cameron McEvoy with Matthew Temple. Likewise, France will only swap out Charles Rihoux for veteran Florent Manaudou. They opted to drop Rihoux, who had the swim of his life in prelims to swim 48.27, over Clement Mignon, who was 48.58 on the leadoff leg. Manaudou’s best recent flat start is 48.58.

Russia will swim out of lane 8, bringing in Kliment Kolesnikov, while also altering their order to put Andrei Minakov on the lead-off leg.

I smell a new WR in 100m free from this relay : Dressel vs Miressi vs Minakov vs Grousset, like Eamon Sullivan did at Beijing 2008.

Cannot underestimate ROC despite their poor performance yesterday. I think Morozov will give his best this time.

What about brooks curry?

The mullet had to go

humm these relay lineups are a bit special

It’s a bold strategy, Cotton. Let’s see if it pays off for ’em.

This is gonna be epic