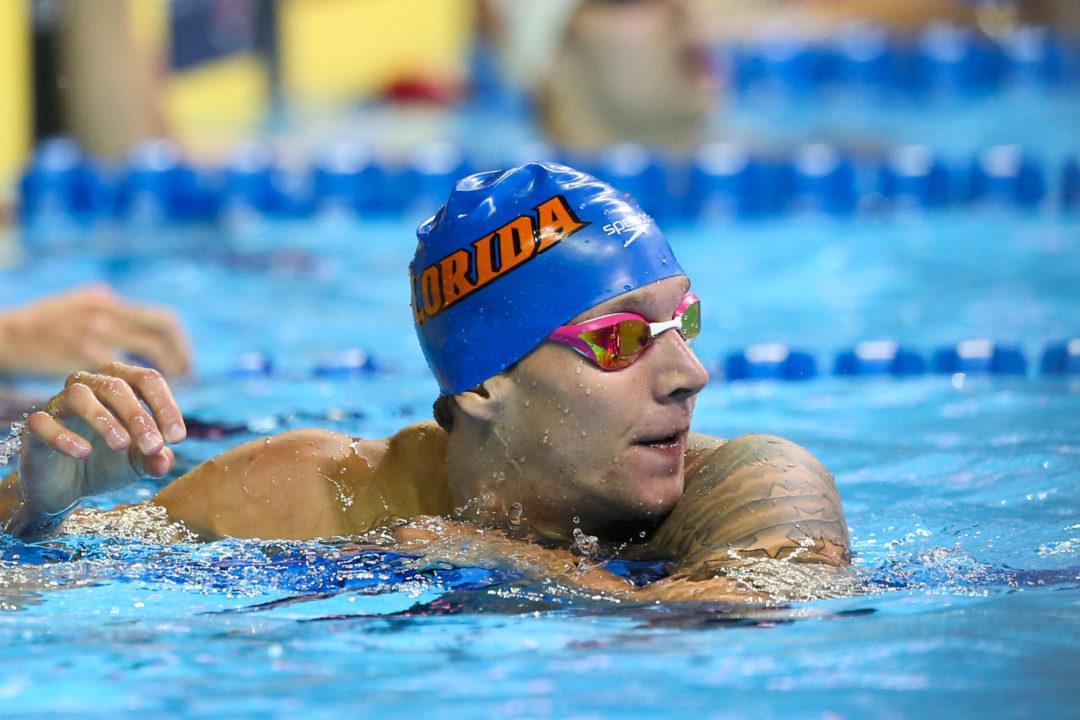 Dressel will seek to defend his 2017 NCAA title in the 100 fly this year against 2015 and 2016 NCAA champ, 2016 Olympic champ (and Dressel’s former club teammate) Joseph Schooling. Dressel started that off on a solid note with a 46.89 tonight, cutting more than a second from prelims and proving his morning swims were very relaxed.

Dressel also competed on the 200 medley relay, splitting 19.43. That’s quite a bit slower than his individual 19.21 from last night (the fastest time ever swum this early in the NCAA season), but is still an excellent September swim. That Florida medley relay went 1:28.65, with freshman Michael Taylor splitting 23.2 on backstroke. Taylor, one of the best backstrokers in this year’s freshman class, will have to push that time down a bit for Florida to contend nationally, but with Jan Switkowski already 20.8 on fly and Dressel primed to push deeper into the 17s later this year in free, Florida could be in the hunt for a national title on this relay. The key will be breast, where the Gators were only 25.13 with Stanley Wu tonight.

Meanwhile star sophomore Maxime Rooney had a huge two-win night. Rooney went 1:37.02 to win the 200 free, just two tenths off his big prelims swim that puts him atop the early NCAA leaderboards. He came back to win the 100 back (48.93) and had the second-fastest split of any swimmer on the 800 free relay (1:36.90). Florida split its 800 free relays, so Rooney’s team didn’t win, but Rooney’s split was his third swim of 1:37.0 or better on the day.

The fastest split went to Jan Switkowski, who was 1:36.86 to power the B relay to the win. Here’s a quick look at all 8 splits from the evened-out relays.

Honestly the article could say “Caeleb Dressel Existed Today” and I’d still get absurdly excited about reading it.

When are we gonna stop beating that dead horse? I will admit that I laughed the first couple times at the joke, but at this point it is getting monotonous.

remember that one time when Schooling said he was even faster than he was?

Can you stop it? This is not funny at all. Even if you don’t like him, there is no need for sarcasm.

Was it in the warmdown pool as well? I have to know all the facts behind this incredibly funny and original joke. 11/10 for being the first person to ever say something like this.

To all the folks who say that Caeleb Dressel will be the next Phelps, I say, “Nah, Dressel is a better breaststroker than Phelps.” 🙂

Not a better backstroker

Yes he is very far from it

Or IMer, flyer, or anything over 100 yards/meters…I honestly despise comparisons like this. Caeleb is probably the LeBron of swimming. But Phelps is Jordan, and no one will ever catch him. Honestly any chance Dressel had of being better than Phelps was gone when he turned 17 and still didn’t have a world record. Give the current superstars their due. But don’t disrespect legends.

Kobe has more points than Jordan

But not more rings

Jordan had 5 less seasons then Kobe

So does Kareem and Karl Malone…your point?

Caeleb has proven that he is a better 50/100 free and fly but he has to have more versatility and longevity (and world records) to really even try to engage in that conversation.

It’s the longevity and versatility that makes phelps so amazing.