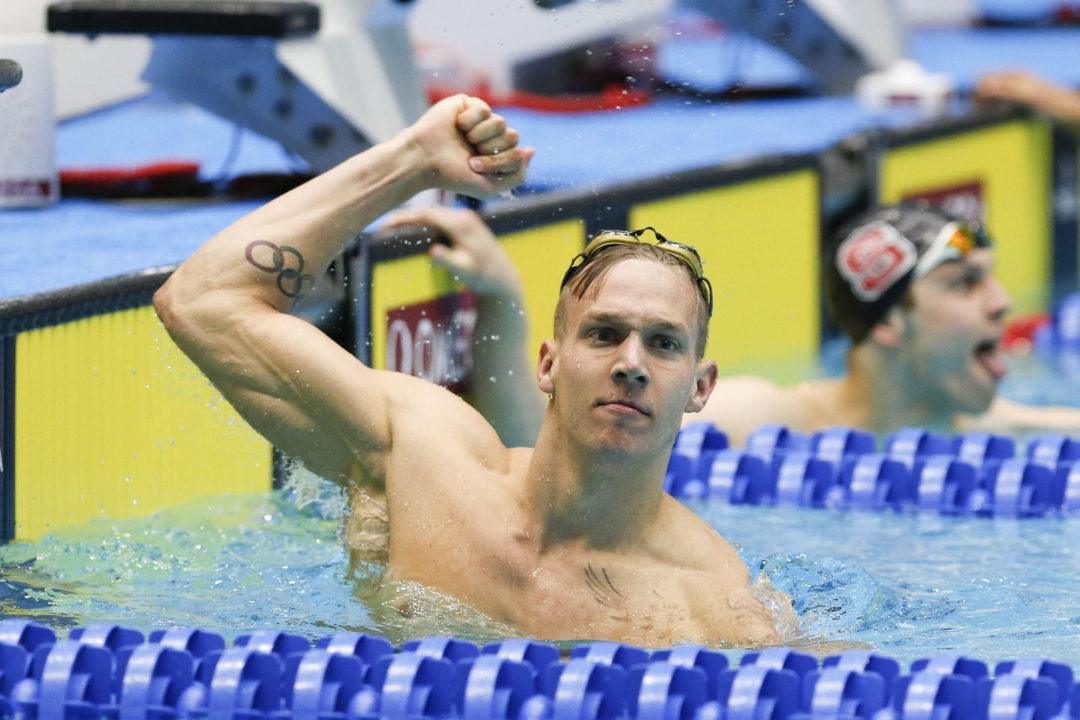 Dressel busted out a 23.05 to secure his spot in the event for Worlds. Archive photo via Tim Binning/TheSwimPictures.com

Tuesday night at the 2017 U.S. Nationals/World Championships Trials in Indianapolis set the stage for a loaded men’s 50 fly final. Caeleb Dressel and Cullen Jones established themselves as the frontrunners this morning, with Jones setting a new Championship Record.

Tonight, however, Dressel took the slight edge to break that record, winning the event and setting a new Championship Record in 23.05 to secure a spot in the event at Worlds. Jones followed closely for 2nd place in 23.27. The former Championship Record was a 23.26 done by Jones in this morning’s prelims. Before today, it stood at a 23.29 done by Eugene Godsoe at 2013 Nationals.

Dressel has now officially qualified for Worlds, though it was almost certain he would make the squad after finishing 2nd in the 100 free last night. He’ll also likely be swimming the 800 free relay at worlds, as he took 6th place in the 200 free final earlier in tonight’s session.

I will confess that since I have never followed 50s of stroke besides 50 free before today for some inexplicable reason, I thought it was top 2 to worlds. Screw me.

What about cullen jones?

He needs to move on & retire. To many up & comers. The tide is a changing for all these guys who have been to OLY several times!!! Don’t think he will make 50 either with Dressel & Adrian in there.

Why? If he loves swimming and he’s still one of the top guys in the U.S. then no he doesn’t need to retire. He’s a great racer and fun to watch!

Dressel probably have a chance to get Gold in 50 fly in Budapest.

Dressel doesn’t look like a 22.6/22.7 50 flyer, at all. He has all the talent, but there are some really raw sprinters who have his card marked imo.

Gotta have a big swim, 2 brazilians are much faster right now

Yup. I guess Manaudou or the brazilians have higher chances to win unless they fail to maintain their current form in worlds.

Manaudou will not be at Worlds

Yes he will, hes commentating.

Santos has more muscle on him, but best start in the world is debatable.