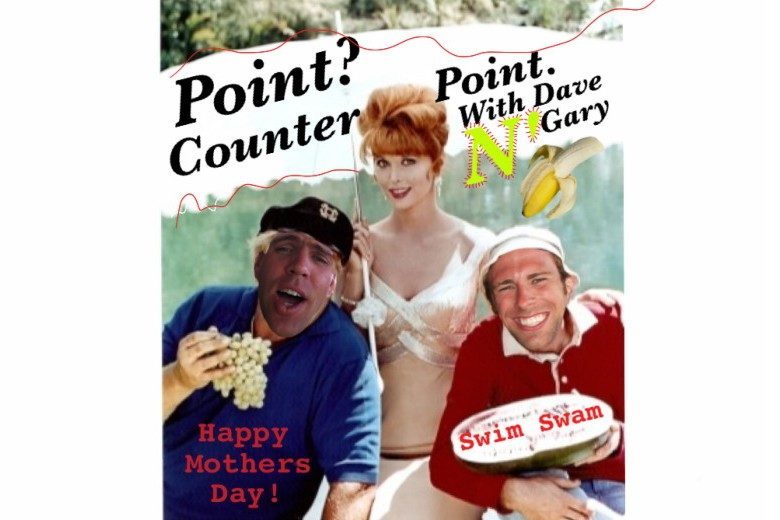 Happy Mother's Day to all! Gary's wonderful mother classes up the column. Gary unclasses it right back.

Gary: Mom, David Cromwell and I have been writing a column for a swimming news site and we’d like to interview you for a Mother’s Day special feature, if you’re amenable.

Gary (after an hour without response): Mom, Are you at church? Why won’t you answer my emails?

David: Well Gary, congrats on ruining another column. Turns out your mom won’t even talk to us. I told you we should’ve interviewed someone that would actually speak to us.

Gary: Hold on a second David, lets tone down the sarcasm for once. She’s probably just drunk. At church.

Mary: We just finished watching The Tudors – I thought that Cromwell guy died…..

Gary: No. You’re not watching TV anymore, Ma. This is real life. It’s your son, Gary. David Cromwell is that kid you warned me about in high school.

Gary: I told you he was weird. David, you don’t have to yell at my Mom.

David (soaking in awkward pause): So, Mary. You have a son that has made quite the impact on the swimming community.  What would you say to parents out there whose kids are swimmers?

Mary: Seriously??  No one has ever asked me a question over Gary’s long career- they always ask old Gary…Okay well um, they save a lot on their water bill when the kid showers at the pool…

David: Amazing. That was funnier than anything your son has ever said. How is it that you have managed to stay more in touch than Gary?  I mean, he’s the one that sits around all day collecting social security and predicting the plot of next week’s CSI: Miami. Yet, you, you actually have a voice Mary. How is it that Gary has gone so astray?

Gary (cutting off David): By the way, Happy Mother’s Day. Let’s do a hypothetical. I’m the President of the United States and for this Mother’s Day, and this one time only, every Mother is allowed one execution. There are no consequences, moral or legal repercussions. Who is the one person this world could do without (like a Joseph Kony or Billy Joel)?

…I suspect that if every mother were granted one execution there’d be no need for Father’s Day.

Mary: Well, on the Tudors I really didn’t like that Cromwell guy but Henry VIII already took care of him….

Gary: Dave, you’re kind of like a mother, except you don’t have any children. Who would you murder?

David: That’s, uh, that’s pretty dark Gary. I’d say lets talk about swimming to lighten up, but I don’t want to talk about suicides or coaches being investigated either. So, I guess that leaves you, Mary, to entertain us. Who had a better swim meet personality, Gary Hall Sr.? Or Gary Hall Jr.? Which one annoys you less outside of the pool?

Gary: I’m the President of the United States, Dave! It’s totally fine! And I’m in the middle of trying to convince my mother to kill you. Quit asking my mother baited questions!

Mary: Wellll, Gary Jr. never spent much time in the pool so…  at least that is what I’ve always heard.

Gary: Mommy, why don’t you just rest and tell us a funny swimming story. And then add some anecdotal quip at the end that leaves all of us feeling like a mother on Mother’s Day?

Mary: I remember one Mother’s Day when Gary was 9 or 10 years old.  Of course we were at a swim meet in Phoenix and it had to be 105 degrees or so.  I patiently sat and watched event after of event of Gary coming in dead last, while any brain cells I may have had to begin with were slowly melting away. He always looked like he was on a Sunday afternoon stroll, turning over so slowly you could count to 20 for each stroke rate.  I decided to try anything to speed things up a bit so I quietly told him I would give him 5 bucks if he did his best time.  Well, he gets up on the blocks and wins his event by half a pool!! The coach and everyone was wondering what happened!!

Gary gets out of the pool and instead of thanking the timer and asking what his time was, as they were supposed to do, comes straight at me with his hand out and says, “Where’s my money!!”  Everyone started laughing out loud but I’m sure they were thinking, “What kind of parent would bribe their kid with money??”  Well, I say to all the parents that have spent countless hours at a pool- find out what motivates them and let them have FUN!!!!

I just received my Mother’s Day card from Gary with the return address being #1 Boy and it had $20 in it. I think it was the 5 bucks he got that day plus interest.

Gary: Hilarious. But that happened when I was 15 years old. WHERE’S MY MONEY! I love that. One time my mother and I got in a screaming argument over the telephone.

She was yelling, “GARY, HAIR MAYONNAISE IS NOT FUNNY!”

And I was yelling back,”HAIR MAYONNAISE IS FUNNY!!”

To which she replied, “HAIR MAYONNAISE IS NOT FUNNY!!!”

“HAIR MAYONNAISE IS TOO FUNNY!!!!”

And so on, back and forth like that for three and a half minutes, each response louder than the last. I just want to say, as my Mother’s Day gift to you, that you were right. Hair mayonnaise is not funny. I love you, Mom.

Gary: Happy Mother’s Day to all you Mothers!

…I’m talking to you, Debbie Phelps.