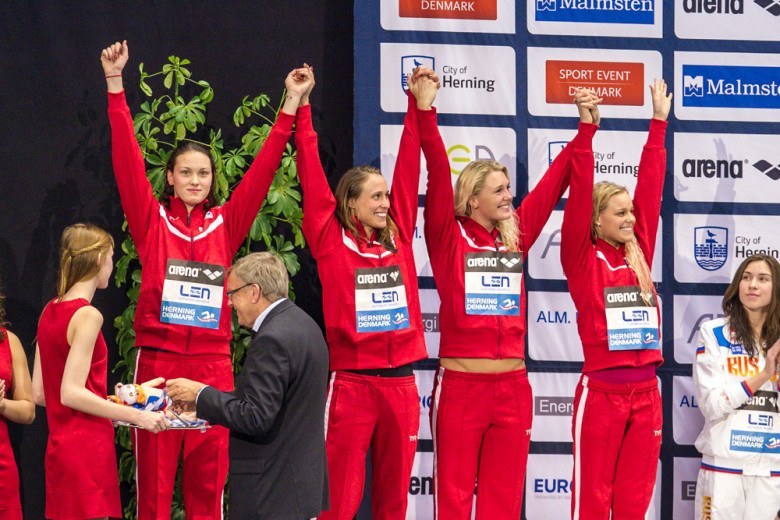 On the day before the start of the Danish Cup SwimSwam had the opportunity to catch up with both Danish National Team Head Coach Nick Juba and the Head Coach of the NTC Shannon Rollason...

The Danish Open will run from Thursday through Sunday and SwimSwam is your go to site for competition coverage.

On the day before the start of the competition SwimSwam had a chance to catch up with Danish National Team Head Coach Nick Juba who shared his expectations when it comes to performance at the Danish Open, “From a Danish perspective I think that it would be good to see a continuation of the improvements we have made as a country since last summer,” Juba told SwimSwam.

“It is very important that we can select a strong and very challenging Danish squad for Berlin.”

“I will be more than happy if we have exciting racing over the next four days. There are no specific measures from me but I need to see Danish swimmers battling for team places!”

He is also extremely excited to see the amount of quality international competitors who will be swimming in Copenhagen, “From a wider perspective it’s great that we have a larger number of foreign swimmers competing here in Copenhagen this time. We need this overseas entry to both develop and expand over the next few years.”

Some of the top Danish storylines include:

The Preparation of the NTC Group

It has been just over a year since Australian coach Shannon Rollason took over the role as the Head Coach of the Danish National Swimming Centre, overall his group has performed well and the Danish Cup will be another chance for the athletes to show the difference his program has made.

Rollason told SwimSwam earlier today that Pedersen, Ottesen, Blume and Joensen are focusing on the Swim Cup in Eindhoven, but the rest of his group is rested and ready to perform, “The lesser known swimmers have tapered for these trials,” said Rollason.

“The three girls and Pal are preparing for Eindhoven in two weeks so they have not rested at all for this meet. Having said that I think they will perform well. Rikke is swimming really well, and is in career best shape. Jeanette needs more rest, so I expect her only to get better over the next two weeks.”

“Whatever the four swim at the trials, I expect Eindhoven to be faster.”

The NTC’s two top athletes, Pedersen and Ottesen, both had outstanding seasons last year under the tutelage of Rollason. Pedersen broke the world record in the 200 breaststroke (2:19.11) in Barcelona, eventually finishing second to what we now know to be a chemically enhanced Yulia Efimova. She also swam best times in the 50 (30.57) and 100 (1:05.93) breaststroke finishing sixth in the 50 and fourth in 100.

Ottesen came home from Barcelona with Denmark’s only gold, winning the 50 butterfly in a lifetime best time of 25.24. She also swum lifetime bests in the 100 butterfly (57.19) and the 50 freestyle (24.54), finishing fourth in the 100 and tied for fifth, with Australian Bronte Campbell, in the 50.

Even though neither is rested they should not be threatened in their main events, by either domestic or international competition. Although Ottesen will be swimming the 100 freestyle and should have her hands full with National Team teammates Pernille Blume and Mie Nielsen.

In September World Championships silver medalist in the 800 and 1500 freestyle, Lotte Friis, decided to make a change, leaving Nice and coach Fabrice Pellegrin for Baltimore to train with Bob Bowman at the North Baltimore Aquatic Club. In an interview in September with SwimSwam Danish National Team Head Coach Nick Juba discussed the change and how all parties involved felt it would be a positive move, “Lotte is taking a break from Nice,” said Juba.

“She might return after Christmas, or she might not. It’s left open-ended. Fabrice Pellegrin, the Nice coach, has indicated that he was going to focus in different training areas (meets) in the upcoming period. Lotte is keen to swim well in the home-based European Short Course Championships in Herning (Herning, Denmark) in December and this influenced the decision. I think it was a good one. I believe that she is at the stage in her career where she needs two embrace new challenges and where better than in the States.”

At the European Short Course Championships Friis finished second in both the 400 and 800 freestyle to Spaniard Mireia Belmonte. She was only 33 one-hundredths of a second off of her best in the 400 posting a 3:58.35 and was just under four seconds off her best 800 of 8:04.77, which she posted in 2011.

The Great Danes Are Off and Running

In October, in one of his first major initiatives, National Team Head Coach Nick Juba put together a group junior men in an attempt to bring the level of men’s swimming in Denmark to the same height that their women have achieved, “I expect this to be an exciting new adventure for the Danish men who have lived in the shadows of our women’s team in recent years,” said Juba.

“It is a new focus and offers our best male swimmers the opportunity to step-up on the international stage. The Great Danes label needs to be synonymous with fast swimming!”

This will be the first major test in the long course pool for the group of 12 swimmers that includes:

Juba told SwimSwam that he has been happy with the group and the progression of the men’s program, but will be keeping his eyes open for more men that have potential, “The men are improving and the Great Danes is clearly helping this steady progression,” said Juba.

“I would like to think that at least five of the Great Danes group will make the cuts for Berlin, and possibly more. At the same time I will be on the look-out for impressive youngsters who we can add to the project and develop later in the season.”

Nielsen Still With Something to Prove

After having an injury riddled 2013 season 17 year old Mie Nielsen started the 2013-14 season in impressive fashion. At the end of the short course season Nielsen found her self sitting on top of the world rankings in the women’s 100 backstroke, winning the event at the European Short Course Championships setting a new championship and European record posting a time of 55.99.

She comes into the meet with momentum after having some great performance over the last few months. In January she set a new Danish record in the 50 backstroke posting a 28.43 and earlier this month her club team set a new Danish national record in the 4 x 100 medley relay, where Nielsen split a 1:00.69, which ranks 11th in the world.

Nielsen has shown she is once again on top of her game and ready to breakthrough on the international stage in the long course pool. The Danish Cup is another arena for her to show the consistency of her performances.

SwimSwam will have reports after the finals each day.

The home page for the event can be found here.