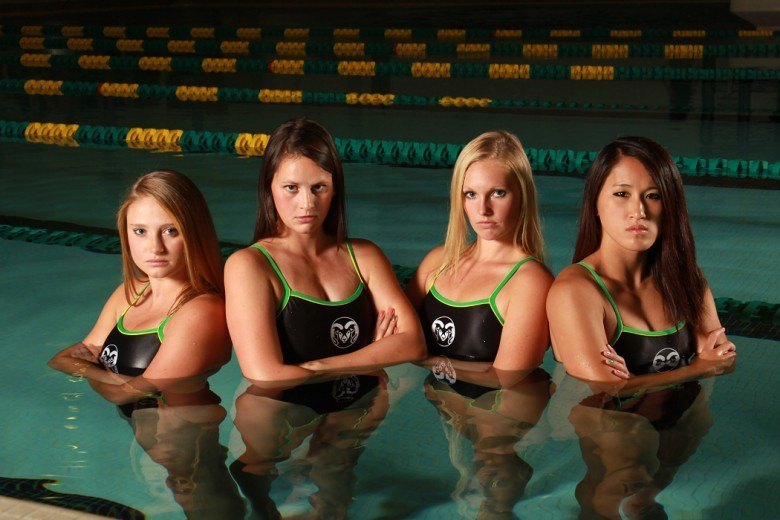 FORT COLLINS, Colo. – Looking to build off the young talent already in the pool for the Colorado State swimming & diving program, Head Coach Christopher Woodard added seven new athletes for the 2014-15 season. Each player signed a National Letter of Intent last week, during the early signing period.
Included in the group is Katie Kicklighter, a High School All-American and Senior National qualifier. Joining her will be three swimmers from the state of Colorado.

“We are very excited about the potential this group of young athletes holds,” Woodard said. “They should help us continue to build toward our goal of competing at the national level, but more importantly, we were impressed with their character and their team-first attitude.”

Katie Kicklighter
Attends Umatilla High School in Umatilla, Fla. … Is a High School All-American, and Senior National qualifier in the 50 Freestyle… For her club, YMCA of Central Florida, was a national finalist and three-time YMCA state champion… Owns four school records as her team captain and MVP… Was named a High School Scholastic All-American.

“We are thrilled to have Katie join the Rams,” Woodard said. “Katie and her coach, Poul Heminger, have worked hard and seen tremendous results over the last year. Katie is someone who knows how to compete in some of the biggest meets at the state and national level, and she will provide an immediate punch in our sprint events and IM.”

Carmen Mand
Raised in Vancouver, Wash. … Earned a state championship in the 100 Butterfly, and a top-five OSI finish each of the last six years… Competes for The Dolphins club team.

“Carmen is an up-and-comer, and someone who will continue to develop,” Woodard said. “Under the guidance of Nacim Bouferrache she has seen steady improvement with an emphasis on technique over training. At the next level, Carmen will be someone who can contribute in both the sprint free and fly events.”

Colleen Olson
Born and raised in Littleton, Colo. … Three-time all-state selection while competing at D’Evelyn High School… Holds five schools records and was part of her school’s state champion 400 Freestyle Relay team… Has earned two league championships and a state runner-up finish throughout her career … Member of the Foothills Swim Team… Part of multiple service groups through her high school, Volunteers of America and her church.

“Colleen impressed us with her ability to do the little things in her races — a testament to the great coaching she gets at Foothills under coach Bill Rose,” Woodard said. “Colleen sprints very well, but has great versatility, and her ability to come back from injury means she is tough enough to compete in the Mountain West.”

Ketti Ringwall
Raised in Dickinson, N.D. … Named the 2013 Western Dakota Association Athlete of the Year, and has earned multiple other honors, including a North Dakota High School all-conference selection and West Region all-conference team nod… Earned a state championship in the 200 Freestyle in 2013… Has lettered each year of high school, and last year was named her team’s MVP and captain… Member of the Dickinson Dolphins Swim Club… Part of the National Honor Society.

“Ketti has been coming to our swim camps for years, and she is, without a doubt, one of the best stroke technicians we have seen,” Woodard said. “She is just beginning to blossom, and with a year of strength training and another year under coach Erika Lindsey, Ketti might be a surprise in the sprint and mid-distance freestyle events.”

Gianna Salanitro
Product of Mountain Vista High School in Highlands Ranch, Colo. … Has competed in several national events, including the Speedo Western Sectionals, Western Zones and the Omaha Swimvational… Was a member of the 2012 Colorado Age Group All-Star Team… Swims for the DU Hilltoppers club team… Is a member of the National Honor Society.

“The Rams have a great corps of breaststrokers, and Gianna will no doubt help make it one of our strongest events,” Woodard said. “Gianna has had exposure to fantastic coaching, working under Hilltoppers’ coach Shawn Smith. We believe Gianna will be ready to compete in the Mountain West from Day 1.”

Hailey Spratte
Born in Denver and raised in Brighton, Colo. … Attends Brighton High School… Holds several league records, and last January was named EMAC Athlete of the Month… Owns two school records (200 Freestyle, 500 Freestyle)… As a junior, placed eighth at the 5A state championship in the 100 Backstroke… A year prior, earned ninth and was named Academic All-State Honorable Mention… Competes for the Jeffco Hurricanes club team.

“Another swim camp gem, we knew we had landed a good one in Hailey,” Woodard said. “Hailey has seen great dividends training under North Jeffco’s Brett Stoyell, and she comes ready to continue the CSU tradition of great backstrokers. As Hailey continues to get stronger and hones her technique, she will definitely make an impact on our lineup.”

“Erin has only been diving for a little over a year and a half, and in that short amount of time, has learned a great deal,” head diving coach Kevin Witt said. “She is an outstanding student, and has a work ethic and personality that should help her fit in immediately.  We are very excited to have Erin joining the CSU divers next season.”