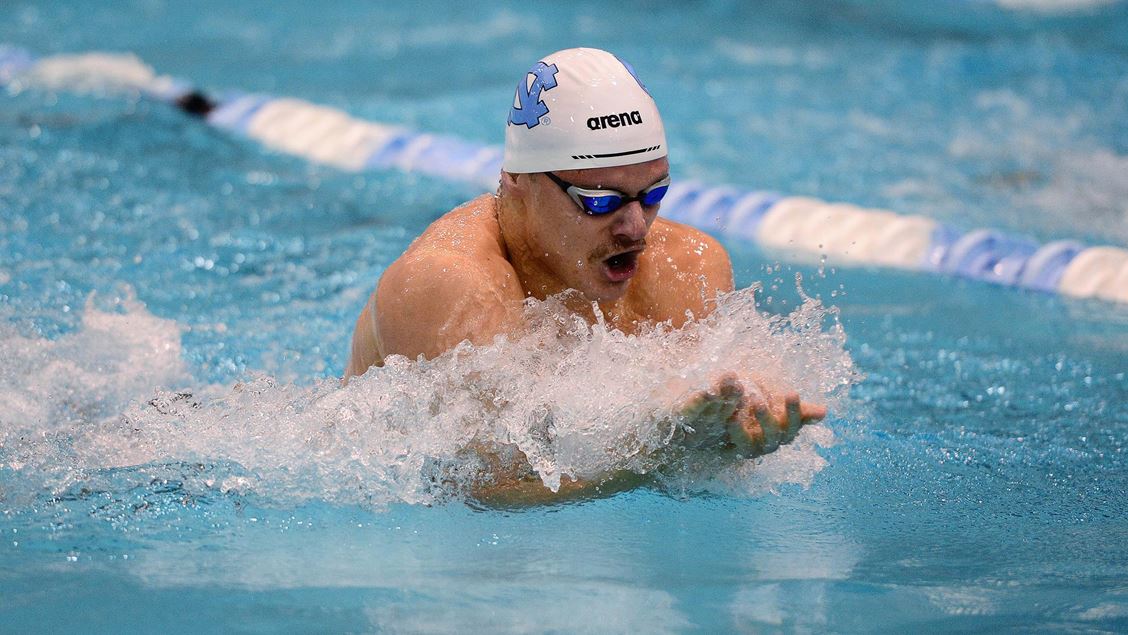 UNC and NC State have postponed their dual meet because of COVID-19 protocols (Above UNC 5th year Valdas Abaliksta, who ranks 15th in the ACC in the 100 beast this year). Archive photo via UNC Athletics

The University of North Carolina has postponed its dual meet scheduled for Friday, January 14 due to “COVID-related protocols within the UNC swimming and diving program.”

The makeup date has not been announced, though timelines are growing tighter with the ACC Championships scheduled to begin February 15-19.

Orange County, North Carolina, where the University of North Carolina is located, has reported 180 new daily cases of COVID-19 per 100,000 population over the last week. That’s a 579% change over two weeks ago.

The school resumed classes on Tuesday, January 10, and required all unvaccinated students and all students living on campus to test prior to their return to campus. In January, so far, the school has reported 956 positive tests among students and 179 among employees.

The Tar Heels are trying to avoid a repeat of last year, where COVID-19 issues within the women’s team resulted in only 14 athletes participating at the ACC Swimming & Diving Championships. That resulted in an 8th place finish, which was the lowest in program history.

The NC State men are ranked #4 in the latest SwimSwam Power Rankings, while on the women’s side, NC State is ranked #3 and North Carolina is ranked #19.

Other meets this coming weekend that have been canceled because of COVID-19 concerns:

I don’t think, with the omicron variant explosion going on right now, that there is a single college team (swimming or otherwise) that is currently Covid free. The difference is how each university is handling it, how much they are testing or not testing, and what the individual school’s quarantine policy is. Some schools are requiring frequent testing with contact tracing and mandatory quarantines, some are barely testing at all and no contact tracing. Some require a negative test after 5 days to participate, some don’t. It’s all over the place. It’s just getting silly to say “we had to cancel because THAT team has Covid”. Every team has Covid.

This omicron is insane. For young college athletes they are going to get sick this time of year and it’s mostly just a severe cold. Yes, some cases can be worse than others, but as to what I’ve been told by people who have had omicron it’s just a bad cold.

I mean sure but I think most coaches would like to avoid exposing their athletes to a team that has a known outbreak of an illness. The last thing a couch wants to happen is a sick team right before taper, whether it be a “bad cold” or not.

Clearly this Covid is going to be around for years since it already has now, we are going to just have to live with it and figure out how to still compete and live normal lives with it here, until there’s an actual cure.

there’s never going to be a “cure” but we have several vaccines that are really effective and several antivirals that prevent hospitalization (not sure whether they are available for widespread use but I believe they got approval a few weeks ago). I agree that we need to “learn to live with it” to a degree but part of that is having testing protocols and maybe not having swim meets if half your team is sick or might be spreading sickness? We shouldn’t be knowingly exposing athletes and coaches who may or may not have weakened immune systems especially if they have the capacity to test and contact trace.

The flu and colds and strep are all exposed just as Covid. It’s going to continue to go around even with vaccines

I’m sure this is true. However, there are risk mitigation measures that can be reintroduced temporarily to swim meets similar to what was successfully done with ‘return to competition’ in 2020 (e.g. no spectators, masks on deck, no team on deck, limit to swimmers behind block, warm up lane limits, etc). The problem is that there is no effort being made to continue safely with competition. Just cancelling as if we haven’t been through this before, have 2+ years with of data, vax, boosters, milder variant, etc is a bit lazy and hard to comprehend. It’s honestly a head scratcher and begs the question ‘when will it ever be low enough risk to stop cancelling?’…

From chatting with college coaches, and I can’t say this is universal, but many who I have spoken to who have had meets canceled, the opinion is kind of a big *shrug*.

People have only ever cared about dual meets for three reasons:
1) If they’re canceled for COVID
2) If their team loses because the other team ‘cheated’ by wearing legal suits, etc.
3) If something off the wall happens, like Katie Ledecky swimming her first races after joining a new training group and entering the men’s events.

So the coaches all seem to look around and say “even if we can mitigate the risk, there’s no risk worth getting my team COVID a month before… Read more »

Appreciate the insights and good points. I fully understand that there is no appetite for getting their teams COVID before championship meets. But, the vast majority of cases are coming outside of these controlled environments. No amount of cancellations has or will slow the spread or keep teams/people from getting it…not as long as people are free to do whatever they like socially outside of these settings. As you correctly state…crazy viral.

The concern is that cancellations become the default response rather than working toward creative and adaptive approaches. If it’s not worth it for dual meets, what happens if faced with the same situation for championship meets?

Had Omicron outbreak in our house just prior to the holidays (2 teenage swimmers, two adults who still swim). We are all vaxed and it spread shockingly fast. For all of us, it was more than a cold. Fever, chills, sore throat, congestion. Lasted 5-8 days. Fatigue lasted another week.

Both my wife and I swam through college and trained with colds. This was worse and not something to train through (albeit not life threatening or requiring a hospital visit in our cases).

Again, the rate it spread was unlike anything we had experienced. Simply because of that I understand coaches, ADs, administrators, etc that may be quick to cancel events after a positive test.

I had it over the New Year. Exposed by a work crew in my house. Then I got seven people sick before I tested positive. Its very catchy even if it is not severe. However, it is not severe for those who have been vaxxed. I’ve been vaxxed and boosted and still got it. It was like a bad cold and I can only imagine what it would have been like for me without the vaccine. This is serious stuff for the unvaxxed, elderly or sick. 90% of people who end up in the ER are unvaxxed.

For the swimmers on our team it’s a light cold. Most have zero symptoms