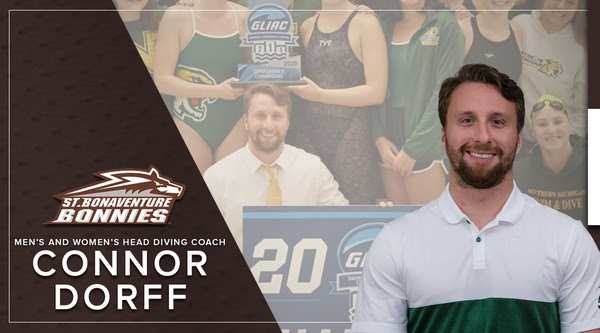 Dorff joins the Bonnies after spending the past four years as the head men's and women's diving coach at Northern Michigan University. Current photo via St. Bonaventure Athletics

Gearing arrives in Tallahassee after one season as an assistant coach at Arkansas-Little Rock.

“We are excited to have Connor joining the coaching staff,” Nitardy said. “Connor brings a wealth of coaching knowledge to our program. He has had numerous student-athletes qualify for the National Meet and we think that he will be able to continue to grow our diving program.”

Dorff joins the Bonnies after spending the past four years as the head men’s and women’s diving coach at Northern Michigan University. While at Northern Michigan, Dorff helped guide the women’s team to a first-place finish in the 2020 Great Lakes Intercollegiate Athletics Conference Championships. In the past two seasons, he has coached three divers to All-American finishes at the Division II NCAA Championship Meet.

Out of the pool, Dorff’s student-athletes carried a 3.30 GPA while also having a 100 percent graduation rate.

Prior to working at Northern Michigan, Dorff spent two seasons as a graduate assistant at St. Lawrence (N.Y.) University where he coached a pair of divers to NCAA Division III regional and national championships in 2016 and 2017, with one diver receiving All-America honors.

Dorff has also spent time as an assistant diving coach at the Duke University Diving Camp in Durham, N.C. for the past two years.

He replaces Stephanie O’Callaghan who took a similar position at North Texas earlier this summer.

Dorff graduated from Denison (Ohio) University in 2015 with a Bachelor’s degree in sociology and philosophy. He received his Master’s in education leadership from St. Lawrence University in 2017.