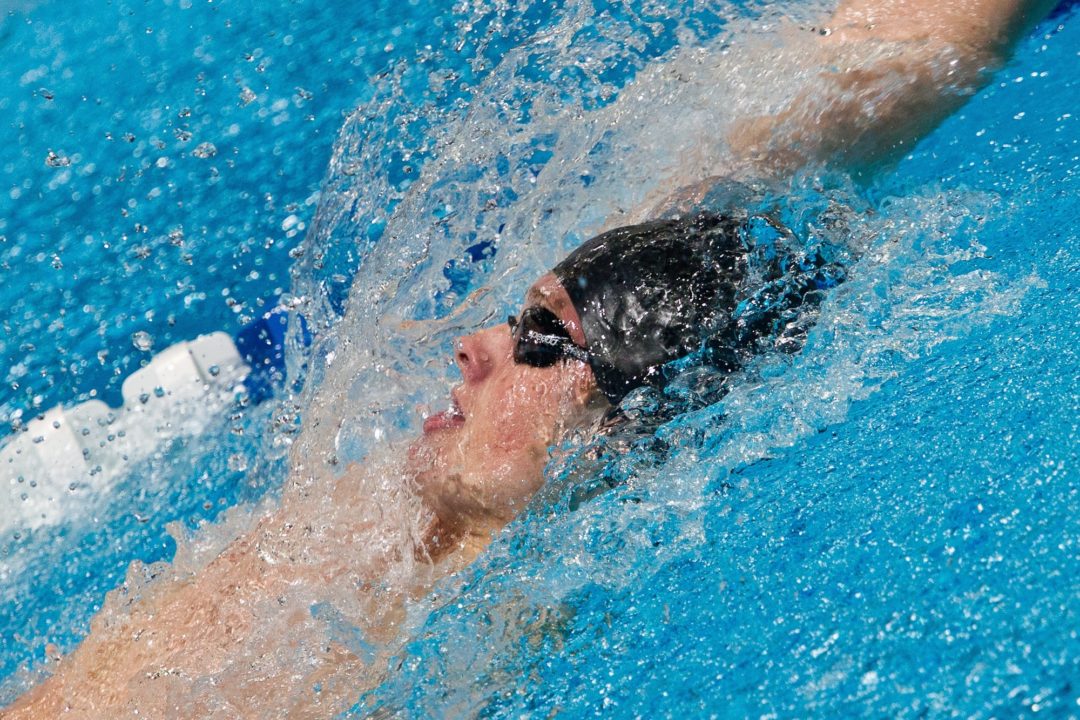 Jack Conger swam his first 200 IM since 2011 this weekend, and the results were impressive. (Photo Courtesy: ©Tim Binning/TheSwimPictures.com)

Jack Conger, representing Our Lady of Good Counsel High School, won a pair of individual Catholic HIgh School national championships this weekend in Baltimore, Maryland as he prepares to enter his taper for the 2013 Metropolitan High School Championship meet in February. Though labeled as a “national championship meet,” the event is largely made up of teams from the Middle Atlantic region.

Conger has been known to swim some different events in high school competition outside of his primary 100 backstroke, though we’d stop short of calling them “off” events, as he’s one of the best in the country in about everything he swims.

The first race of the day weekend for him was the 200 IM, where he was a 1:48.18 – a lifetime best by 5 seconds. He’s only swum that race a small handful of times since 2010 in yards (5-or-so), but with the impressive speed he’s shown in backstroke, fly, or freestyle the time wasn’t unexpected.

Later in the meet, he would win the 100 free in 44.27. That’s the best time he’s had in official high school competition, though he was about a second better at Tom Dolan in December. Behind him in 2nd place was Billy Beard from Malvern Prep in Pennsylvania, who swam a 46.63 as just a freshman. That’s a lifetime best for the 15-year old who is also headed toward his championship season.

One of his teammates on that medley was Leo Mercer who won the 100 breaststroke in 59.36. Carsten Vissering, from Georgetown Prep, would’ve given him a run for his money, but focused on the sprint freestyles at this meet instead. Showing how good the sophomore is though, he split a 25.4 on his team’s medley relay.

That meet isn’t in March. It is in early February of I’m not mistaken.

That meet isn’t in March. It is in early February if I’m not mistaken.

Ah yes. The high school winter championship season has begun. Always some of the best. We will see how the winter champ season stacks up against the Bolles school dominance of the fall.