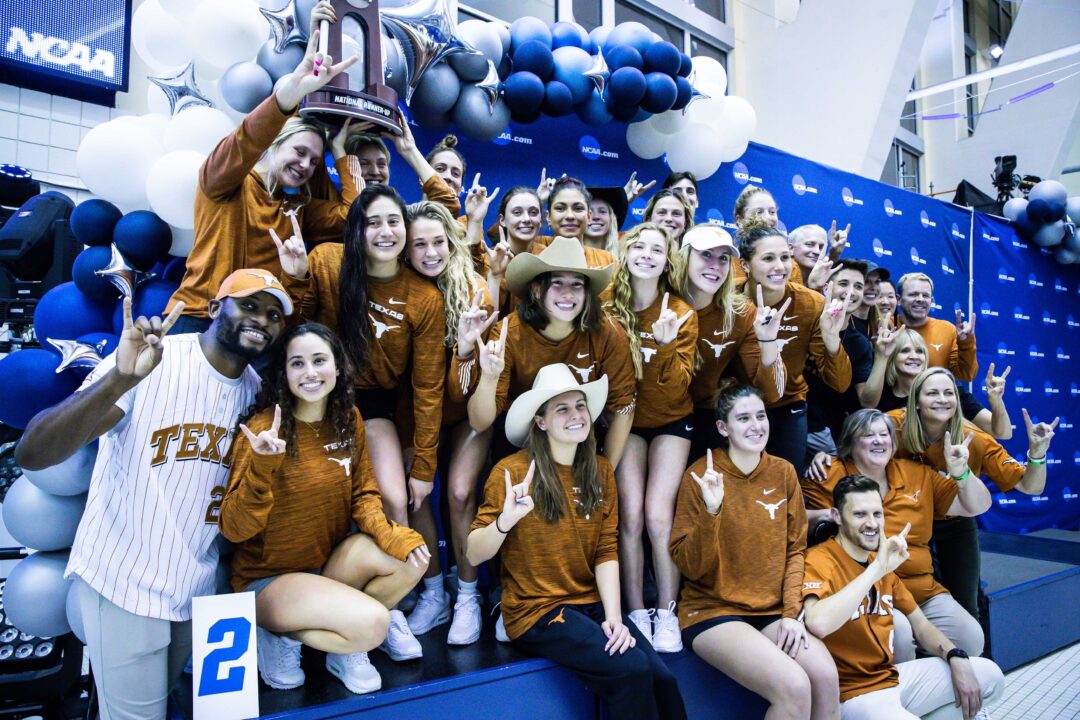 Capitani led the Longhorn women to a surprise runner-up finish at the NCAA Championships, marking the team's highest showing since 1994. Archive photo via Jack Spitser/Spitser Photography

University of Texas women’s head coach Carol Capitani led the Longhorns to new heights at the 2022 NCAA Championships, earning a runner-up finish to mark the team’s best showing since 1994.

After Capitani and her staff propelled Texas to its first top-three finish in 20 years at Women’s NCAAs in 2021, falling just shy of the second-place NC State Wolfpack in third, the Longhorns defied the odds in 2022 by upending the revamped Stanford Cardinal and earning the runner-up spot in the team race.

The Longhorns scored 406 points to edge out the Cardinal (399.5), with the Virginia Cavaliers successfully defending their title with 551.5.

Texas had seven different swimmers put points on the board at the meet individually, led by junior Kelly Pash who set personal best times in all three of her events en route to placing third in the 200 free, fifth in the 200 IM and fifth in the 200 fly.

Sophomore Olivia Bray (34 points) also made the championship final in three of her individual races, and freshman Erica Sullivan (33 points) rattled off season-best times en route to placing second in th 1650 free and third in the 500 free at her first NCAAs.

Trailing by 19 points with two events to go, Texas had three divers in the ‘A’ final of platform diving—Jordan Skilken, Janie Boyle and Paola Pineda—and they overtook the Cardinal in that event and held them off in the 400 free relay. You can get a visual perspective of the battle between the two teams here.

The Longhorns ultimately outscored their projections (psych sheet points) by 83.5 points in the pool, which was the most of any team at the championships.

Capitani, who took over as Texas’ head coach in 2012-13, has now led the Longhorns to top-10 NCAA finishes in eight of her nine opportunities (not including the canceled 2020 NCAA season), with a steady ascent the last three years. Coming into 2020-21, the team’s highest finish under her watch was fifth in 2019, and now they’ve reeled off consecutive third and second-place finishes.

Joining Capitani on the Longhorns women’s staff this season was assistant coach Mitch Dalton, along with head diving coach Matt Scoggin and his assistants Manny Pollard and Bryce Klein.