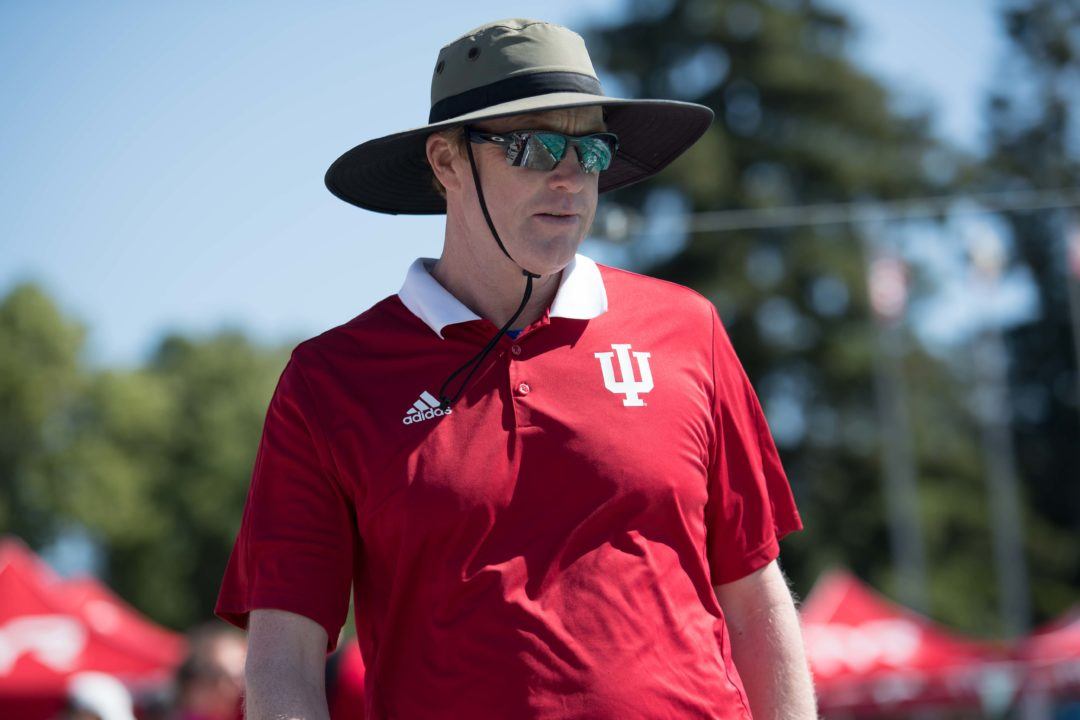 We’ll be previewing the top 12 men’s and women’s programs for the 2018-2018 season – stay tuned to our College Swimming... Current photo via Mike Lewis/Ola Vista Photography

Indiana’s 2017-18 season looked relatively similar to their 2016-17 one, duplicating an 8th place finish at the NCAA Championships. Undoubtedly, the star of the show for Ray Looze‘s Hoosiers last year was Lilly King – who lowered her own American/NCAA/U.S. Open records in the 100 breast (56.25) and 200 breast (2:02.60). On top of that, IU’s 400 medley relay and 200 medley relay picked up a 2nd place and 3rd place finish, respectively. Those 4 races alone accounted for 101 of the Hoosier’s 169 NCAA points. On the conference level, the IU women finished 2nd at the Big 10 Championships behind Michigan.

Over the last several years, sprint freestyle has been a pain point for the Hoosiers – especially for relay purposes. At last year’s NCAA Championships, IU was leading after the butterfly leg of both the 200 medley relay and 400 medley relay; however, they faded to 3rd and 2nd, respectively without a powerhouse on the anchor. Under the leadership of sprint coach Coley Stickels, freshman Grace Haskett performed admirably – splitting a 21.79 on the 200 medley relay at NCAA’s and posting a team-leading time of 22.10 at the Purdue Invitational. She was also the team leader in the 100 free thanks to a 48.72 at the Purdue Invite.

With the introduction of newcomers Ileah Doctor, Morgan Scott, and Julia Wolf  – all 22/49 freestylers – the Hoosiers could have a solid sprint group for years to come. Both Haskett and Doctor have lifetime bests that would have scored in the B-final of the 50 last year and that quartet could put together 200/400 free relays that could score. Junior Shelby Koontz will also be a factor. While she is primarily a butterflier, she went 22.7 flat start in the 50 free last season and split 48.5 on their 400 free relay at NCAA’s. On paper, the 200 free – and subsequently 800 free relay – appears to be a weakness for the Hoosiers. They lost their fastest 200 freestylers in Kennedy Goss and Delaney Barnard, so it will be up to junior Maria Paula Heitmann, who has a lifetime best of 1:45, to lead the charge.

Led by junior Cassy Jernberg – who has lifetime bests of 4:39 in the 500 and 15:54 in the 1,650 – the Hoosier distance freestyle crew is small, but mighty. Jernberg picked up big points for IU last year with a 9th place NCAA finish in the mile. Heitmann, who swims the 500 and down, has a best of 4:43 in the 500 – which isn’t in NCAA scoring position, but makes her dangerous enough to compete. Indiana is also gladly welcoming freshman Maggie Wallace who has lifetime bests of 4:46 and 16:14 in the 500 and mile, respectively. That mile time is outside of scoring range, but it wouldn’t be out of the question to see a drop down into the 16-minute range which could pick up B-final points.

Last season, breaststroke ace King was the only one to score NCAA points in an IM event with a 14th place finish in the 200 IM (1:55.83). However, that will very likely change as IU picked up a massive transfer in Denver’s Bailey Andison. The senior finished 8th in the 200 IM and 9th in the 400 IM at NCAA’s last season. With the 200 IM potential of butterflier Christine Jensen (lifetime best of 1:56.76) and the addition of freshman Christin Rockway who has been 4:12.0 in the 400 IM, the Indiana IM group is looking strong to pick up some points at NCAA’s. Like the distance free crew, the IM group is small, but mighty. However, throwing someone like Andison into the fold immediately gives them a substantial boost.

The best news for the Hoosiers is that they return their fastest two butterfliers in Jensen and Koontz. In the 100, Jensen’s lifetime best of 51.28 would have placed top 8 at NCAA’s. However, she only posted a 52.05 in prelims which left her on the outside looking in with a 17th place finish. She made up for it, though with monster splits on the 2nd place 400 medley relay (51.13) and 3rd place 200 medley relay (23.18). With a lifetime best of 52.28, Koontz is also a player in the 100 but will likely be a stronger presence in the 200 (lifetime best of 1:56.89). She declared a false start in the 200 at NCAA’s last year to likely focus on the 400 free relay. Newcomer Rockway has a lifetime best of 1:57.66 in the 200 and, while she is on the outside looking in from a scoring position, could drop down enough to pose a threat for a B-final spot (assuming she opts to swim it over a comparable 200 backstroke). Ultimately, the Hoosier butterfly group will live and die by the production of Jensen. If she swims up to potential, they are looking at big time A-final points in the 100 and major relay boosts.

The combined losses of Ali Rockett, Kennedy Goss, and Marie Chamberlain decimated the Hoosier backstroke group. Rockett finished 6th in the 100 back at NCAA’s last year and was a critical component of their medley relays. Goss ended up finishing 18th in the 200 back last year, but was still a major contender as she finished 7th in 2017 and 3rd in 2016. With that, their fastest returner in the 100 is Haskett with a 53.3 and sophomore Kendall Hermann with a 1:56.2 in the 200. Neither of those times are poised to score. Looking at the newcomers, Scott has a 53.9 to her name in the 100 but likely won’t drop her 1:46 200 free to favor that. In the 200, Rockway has been 1:57 – but as mentioned earlier also has a 1:57 in the 200 fly, which poses a dilemma.

The breaststroke group in Bloomington is the bread and butter or meat and potatoes – whatever you want to call it. Like other groups – they’re strong at the top end, but not very deep. Led by King, the fastest short course yards breaststroker in history (both the 100 and 200) and 6x individual NCAA champion, this group is formidable. King is all but guaranteed to provide the Hoosiers with 40 points at NCAA’s, which means a win in the 100 and 200. With a 2:10 lifetime best, the senior transfer Andison will also be looking to make in impact – likely for B-final points in the 200. Freshman Noelle Peplowski has strong lifetime bests of 1:01.3 and 2:13.3 – both of which are not quite in scoring position, but very well could be at the end of a season training with and competing alongside King.

All in all, the Hoosiers are realistically looking to compete for another top-10 finish at NCAA’s. Based on what they lost and what they have gained, there isn’t any tangible evidence that suggests they can make a large jump as a team – say top-5 or top-3 NCAA finish. As they have been for the last 3 years, Indiana will be led by the superstar King. They gained some much needed talent to fill holes in the sprint freestyle arena, but that likely won’t materialize into significant NCAA points right away. IU’s top 3 medley relays took a big shot with the loss of Rockett and will need an unlikely hero to step up in a big way if those relays want to stay in the top 8.

I forgot that Emily Weiss has one more year of high school swimming before heading down to IU.