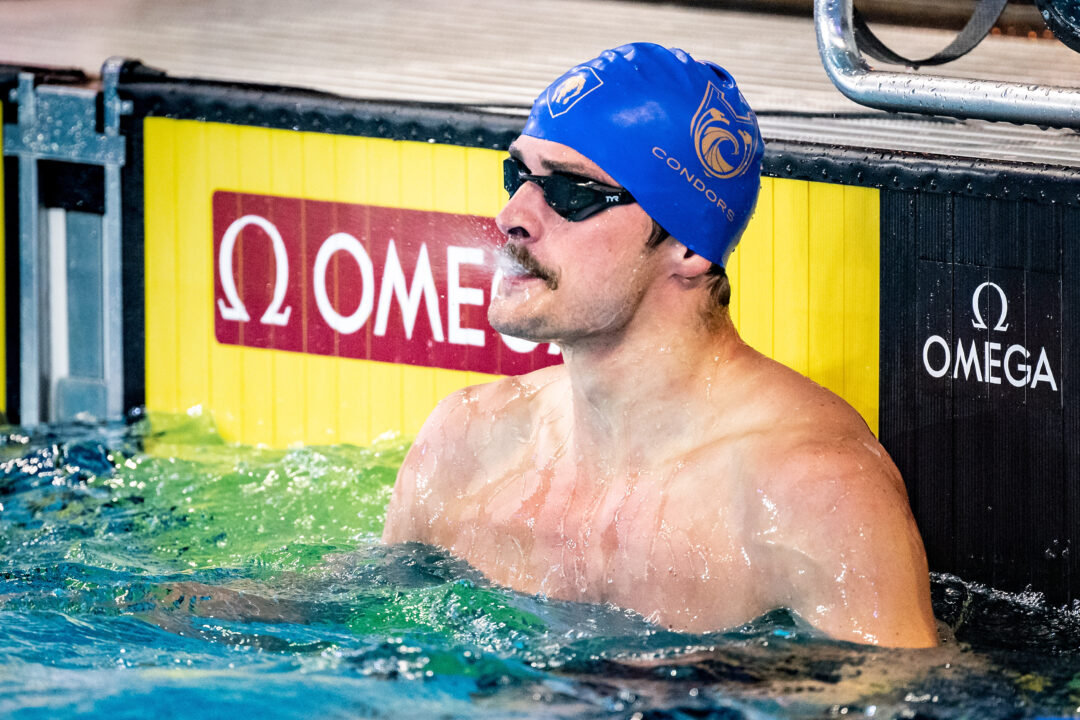 Stewart accused USA Swimming of having a "long history of only caring for their top-tier long course swimmers." Archive photo via Giorgio Scala / Deepbluemedia / Insidefoto

Coleman Stewart was glaringly omitted from being named to the U.S. roster for the upcoming Short Course World Championships, and he has since issued a statement criticizing the selection process in place for the meet.

Stewart broke the world record in the men’s SCM 100 backstroke in late August during Match of the International Swimming League (ISL) season, and yet wasn’t really even close to being named to the Worlds team in the event.

Once the announcement became official and USA Swimming named its roster on Thursday, Stewart issued a statement regarding the situation on social media.

Stewart was critical of the “outdated” selection process, and accused USA Swimming of catering to its best long course athletes.

“I was not offered a spot on the short course worlds team by USA Swimming,” Stewart wrote. “As the current world record holder in a short course event, I cannot understand USA Swimming’s reasoning behind this decision.

“Choosing a short course team from long course times is an outdated selection process that has worked in the past, and may continue to work due to the depth of our swimmers, but it leaves off some of the best swimmers America has to offer.

“USA Swimming has a long history of only caring for their top-tier long course swimmers, and leaving multiple short course American Record holders off the team has only solidified this in my opinion.”

Stewart dove deeper into his thoughts on the topic speaking to Brett Hawke on his podcast, which you can watch here.

“Bottom line is, to say I am disappointed with USA Swimming is an understatement. With that said, I do wish all individual United States swimmers the best of luck and look forward to watching them compete.”

Stewart also referenced this Tweet in his statement where he offered an alternative selection procedure, one similar to how the Ryder Cup is selected in golf.

I think USAS should take notes from the PGA for how they selected the Ryder Cup team. Choose an unbiased captain, have the top X number of swimmer be selected by world ranking/FINA points/etc. then the captain can select the remaining athletes to fill the roster.

Rather than Stewart, the two U.S. spots in the men’s 100 back will be filled by Hunter Armstrong and Shaine Casas, who ranked second and third on the National Team roster in the event (#1 Ryan Murphy has declined to compete). Stewart was the 11th-fastest swimmer in the long course 100 back during the National Team qualifying period (Jan. 1 – Aug. 31, 2021).

Similar to Stewart’s omission, another major swimmer absent from the Worlds team is Beata Nelson, Stewart’s Cali Condor teammate in the ISL, who was the top scorer in the league’s regular season and broke the American Record in the women’s 100 IM in mid-September.

The 2021 FINA Short Course World Championships are scheduled for December 16-21 in Abu Dhabi.

I wish him well

Opps! It IS broke!
Time to fix it.
Fair is fair and vice-versa.
Coleman S is correct.

Guess he and USA swimming were just raised different

There was an interesting comment made in a previous article about this whole situation. (Paraphrasing) it said to the effect “now that the world is taking SCM more seriously”. I’m going out on a limb to probably assume that comment came from someone in the US. I didn’t take it negatively, I think it just showed that for the most part, the US system still leaning heavily on SCY even in the 21st Century still just doesn’t “see” that the rest of the World isn’t just taking SCM seriously “now” (probably bc the ISL is illuminating SCM in the US now).
On the rest of the literal entire planet, there are 2 seasons. SCM and LCM. Everyone else has… Read more »

SCY times seem more comparable to SCM than LCM. Why not take like 2/3(best SCY time) + 1/3(best LCM time) or some other proxy as the basis for comparison if we don’t think straight SCM times is fair. SC is almost a different sport than LC for backstroke and fly. Mr. Stewart seems to have a pretty good point.

Hopefully he didn’t just pick up his phone and go scorched earth on this. He should call Salo and tell him to fix this garbage since Salo is the head coach.

Stop crying WOLF and get elected to the USA Swimming Board of Directors. Then you will have a say.