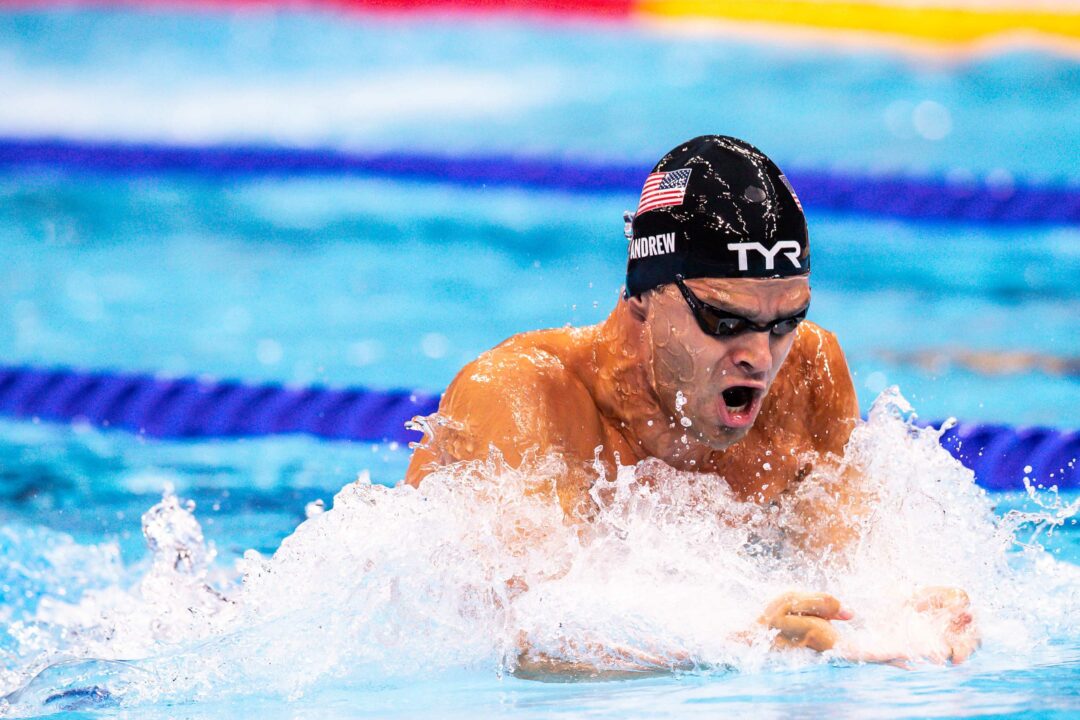 Michael Andrew is one of 28 swimmers that will represent the United States at the 2021 Short Course World Championships in Abu Dhabi. Archive photo via Jack Spitser/Spitser Photography

USA Swimming announced a roster of 28 swimmers that will compete at the 2021 FINA Short Course World Championships on Tuesday, with the meet scheduled for December 16-21 in Abu Dhabi, United Arab Emirates (UAE).

The roster features 15 swimmers that were on the 2020 U.S. Olympic team, including individual gold medalist Lydia Jacoby and relay gold medal winners Zach Apple, Michael Andrew and Hunter Armstrong. The team also includes seven swimmers aged 19 and under—all on the women’s side.

Relays will be chosen by the coaching staff

The team notably does not include any relay-only swimmers. Michael Andrew leads the way with six individual entries, followed by Kieran Smith, Nic Fink, Melanie Margalis and Torri Huske who all have four.

Smith and Huske represent two of the 12 swimmers on the roster currently competing in the NCAA, while there are four junior swimmers on the women’s side that are still in high school.

Margalis, who is tied with Tom Shields as the oldest member of the team at 30, is coming off a disappointing U.S. Olympic Trials in the summer and isn’t competing in the International Swimming League this season, so her presence here feels significant in signifying she’s back into full training.

There are numerous glaring absences from the U.S. roster, none bigger than Caeleb Dressel, the SCM world record holder in three events and reigning SC world champion in the men’s 100 freestyle.

Stewart had an explosive performance at the beginning of the International Swimming League (ISL) regular season in late August, breaking the world record in the men’s 100 backstroke in a time of 48.33.

Smoliga exploded for a record eight-gold medal performance at the 2018 SC Worlds in Hangzhou, China, including individual wins in the women’s 50 back and 100 back, while both King and Murphy have been among the top performers in the ISL over the past few years, largely dominating the women’s breaststroke and men’s backstroke events.

USA Swimming also announced eight swimmers that will be competing at the FINA/CNSG Marathon Swim World Series, also taking place in Abu Dhabi on December 15-16, directly before the beginning of the pool competition.

Below are the U.S. athletes competing in the open water event:

The meet was initially scheduled to run in December 2020 but was postponed for one year due to the coronavirus pandemic.

She’s not literally a shark. I mean, humans don’t die when they stop swimming (immediately).

THE FACT THAT COLEMAN STEWART UIS NOT ON THIS TEAM IS A BUNCH OF BS!!!!!!! He is literally the freakin world record holder!!!!!!!!!!!!!!! How is that not enough to put you on the US national team!? Why are they using long course times for short course!!!!!!!! SO Stupid!!

Basically, regardless of whatever special guidelines are put in place for athletes, Americans, if they test negative, don’t have to quarantine or do anything special. Vaccinated or not. And I’m sure FINA will uphold a testing standard.

Yes but the U.S. government is requiring all international travelers over 18 to show proof of vaccination after November 8th? I can’t see how the athletes will avoid being vaccinated.

I have seen a lot of these mis-descriptions of the new US government rules on social media, and have spent a lot of time correcting them (because, the answers are all there, for anyone who reads).

Ways in which your statement is inaccurate:

-It’s not all international travelers, just flyers
-If you are a US citizen or green card holder, and all members of the SC Worlds team are citizens, if you are unvaccinated, you just need a negative test within 24 hours of return travel.

I wonder if some of the absences are due to UAE’s protocols? As of now, there’s still a required 14-day quarantine upon arrival, regardless of vax status and any sort of negative testing. I know that’s caused a few non-athletes to not go. I have no idea if there’s some sort of exception for athletes (and/or if there’s a place for them to specifically “quarantine train” during that window), though.

I also expect that there are exceptions for hosting a meet of this caliber. Even if that means an elevated testing level (like, you must be tested daily), I would suspect that they would be required to waive a quarantine retirement to be able to host.

I’m from a winter sport that’s currently having its main pre-Olympic competition season, different country each weekend for a few months. Every country except one has exceptions to their Covid international traveler protocols for high level athletes entering for major sporting events, including athletes who aren’t vaccinated/aren’t vaccinated with a WHO-approved vaccine. (The biggest problem has been that Russia’s vaccine isn’t approved for entry into most countries because they won’t share efficacy data with other regulatory bureaus, and Russia’s vaccine isn’t approved for people under 18, so that’s a double whammy.) The winter sports don’t compete in UAE, but in general – exceptions are being made for athletes entering for these major sporting events in the winter sports doing major… Read more »

So disappointed Caeleb isn’t going. He holds WRs in 3 of the 5 SC individual events he swims. Oh, well, he can set the other two at ISL or elsewhere.

Damn I really wanted to see his battle with Kyle or Kristof etc. Not a fan of ISL.

He’s pretty smart not to go. Typically, swimmers have a year to decompress after the Olympics, but we’re just around the corner to 2022 and just two years to Paris. With long course Worlds next year and again in 2023, energy management is the name of the game. Also, I’m pretty sure meet timing had something to do with it. I doubt he wanted to be that far away from home that close to Christmas.

Usaswimming and fina are big dummies!!!