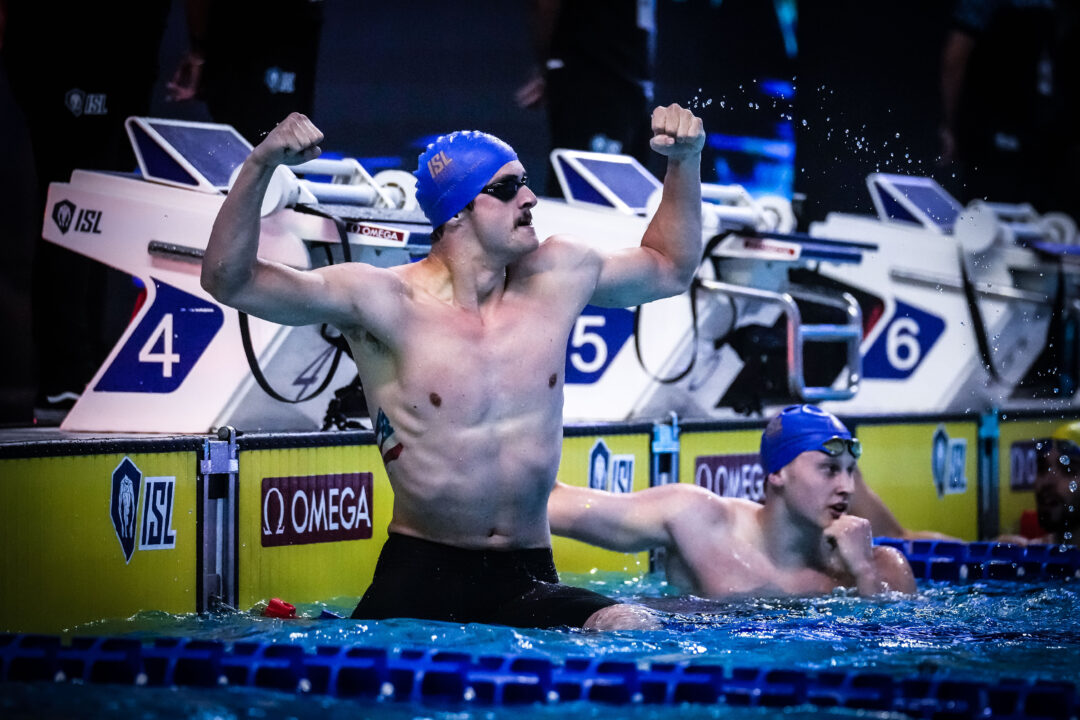 After setting the world record in the 100 backstroke less than two months ago, Coleman Stewart was never in position to compete in the event at SC Worlds. Archive photo via Mike Lewis/Ola Vista Photography

Coleman Stewart is the fastest swimmer in history in the men’s 100 backstroke in short course meters, and yet he won’t have the opportunity to vie for a World Championship title in the event.

USA Swimming announced its roster for the 2021 Short Course World Championships on Thursday, and Stewart was one of the most notable absences.

And while top names such as Caeleb Dressel and Lilly King appear to have declined the opportunity to compete, Stewart wasn’t even given the option despite being the fastest swimmer of all-time in one of the events.

The reason is due to the fact that the qualification criteria put in place by USA Swimming is selected off of the National Team roster, which is selected based off of long course times.

So despite Stewart’s world record-breaking performance of 48.33, set in late August during the ISL season in Naples, he won’t be in Abu Dhabi racing for the world title.

Stewart also spoke to Brett Hawke about being left off, saying he hadn’t heard from USA Swimming and knew based on the criteria he wouldn’t be selected to race the event.

The men’s 100 backstroke will instead feature Olympian Hunter Armstrong and reigning NCAA 100 back champion Shaine Casas, who rank second and third on the National Team roster in the event. Ryan Murphy, who sits first, has opted out of the event.

While those are both great options to represent the U.S., it does beg the question whether the system put in place is outdated—using long course performances to select a short course team. With so many SCM competitions having taken place over the last two months, it seems that would be a logical starting point to build a SC World Championship roster.

Hypothetically, Stewart was the 11th man in line for a spot based on the 2021 LC rankings in the U.S. (though if all 100 back National Teamers declined, the spot would’ve been offered to a swimmer already on the team).

Selection for SC based on LC makes as much sense as selecting for LC based on SC results. None. There’s more to swimming than the Olympics. Swimmers and fans love SC because it’s exciting and relatable. The NCAAs and ISL have made that universal appeal abundantly clear. Time to jettison yards. Imagine if track and field still ran the 440 and 880. How embarrassing that American swimming still does! A full embrace of SCM is long overdue.

I think this can start in an power 5 NCAA conference or amongst some team duel meets.

They have the pools for this and it can easily be done.

This comes on the heels of the belated realization that there are no SCM NAGs. While SCM will never have the same status as LCM, it is a legitimate World Standard (like indoor track). Meanwhile, we continue to build pools for the irrelevant and antiquated SCY sandbox. American swimming is dominated by dinosaurs who are fixated on the past instead of the future.

It’s not puzzling though is it.

Because the criteria was very clear.

What an opportunity SC worlds could be for USA Swimming to capitalize on NCAA talent and give SC stars a taste of a USA team. Beyond the obvious $$ potential for athletes like Coleman, there is a lot of opportunity for developing athletes to go on to bigger (i.e. long course) meets down the line, and I think USA Swimming has been on the wrong side of it for years. Hopefully this error is impetus for change.

But those LSC logos look good.

Maddy Banic another American record holder left off the team