Coaching for Dummies: Qualifying a Swimmer for the NCAA Championship 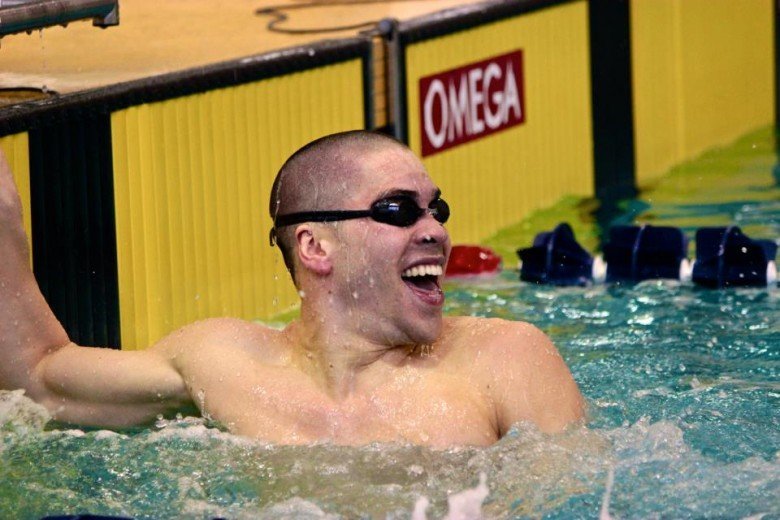 This is what someone looks like when they drop .6 in their 100 fly in what was quite possibly the last race of their collegiate career and go a time that is fast enough to qualify for NCAAs. (Photo Courtesy © Elliott Brockelbank)

Now that I have coached exactly one swimmer that has been invited to the NCAA championship, I feel fully qualified to write a guide on how to do it. The NCAA Division 1 Championships is the hardest meet to qualify for in the entire world. Think about that- it’s harder than the Olympics, since many countries send swimmers with FINA “B” standards that don’t hold a candle to the times that go to this meet. So if you want to get there, you should definitely follow this guide.
Step 1: Recruit a swimmer with the ability to qualify for NCAAs. Got that?
Step 2: Repeat Step 1 as many times as you possibly can. Just because someone has the “ability” to make NCAAs does not mean they will do so. You are going to want to give yourself a bunch of cracks at it. More on that later, but for now understand that you must recruit swimmers within striking range of qualifying for the meet.
That is, unless you are Dave Salo and then you can just use your wizard magic to make them faster. I kid, but did you know that Dave Salo once coached a guy who never even saw a pool until age 17 to go 19 in the 50 free? Kidding again, but you have to admit I had you going there for a second. Ok, onto…
Step 3: Try, try, try again
Wait, what is that Master Yoda?
http://www.youtube.com/watch?v=BQ4yd2W50No
Oh, ok. Got it. Well, ummm, you’re probably going to have a few “do not” qualifiers before you “do” qualify someone. Maybe you won’t have this happen, maybe you are Brett Hawke and you will win an NCAA Championship in your first year as head coach. In which case you can take your expensive shoes and cool accent and legacy as a world class sprinter and “oh yeah remember that time I coached the guy who went 40.9 in the 100 free and won a gold medal in the Olympics” to another blog, k?
Step 4: Last Chance Meet
Let’s say your swimmer made it through their final taper meet, which in most cases is a conference championship. Their time is on the borderline but probably not going. Fear not! There is another chance beyond what you may have thought was your last chance.
The Last Chance meet is probably the most universally reviled concept that many teams use each and every year. Most coaches don’t like them because they are probably some of the most soulless swim meets you will ever attend in your life, glorified individual time trials that in no way simulate actual meet conditions. I love last chance meets right now because otherwise, I would be watching the NCAA webcast again.
Step 5: Time trial at said Last Chance Meet
That’s right, at a meet that I already said was a glorified time trial you can do an actual time trial.
Step 6: GO REALLY FAST AND OMG YOU MADE THE MEET!!!!!

“That is, unless you are Dave Salo and then you can just use your wizard magic to make them faster. I kid, but did you know that Dave Salo once coached a guy who never even saw a pool until age 17 to go 19 in the 50 free? Kidding again, but you have to admit I had you going there for a second.”

Chase Stevens couldn’t do a flip turn at age 15. He’s swimming the 100 free for Northwestern at this meet. And Salo hasn’t been within 1/2 a continent of the young man.

That just goes to show you how strong Salo’s wizardry is!

Is Hawke Salo´s aprrentice so? Chiereguinni just began swimming at 17/18 years old.. Or maybe Some French coaches.. Leveux never swam ( except public crowded full os piss pools ) before 16 and barely had any money to eat, buy a suit and more…

Peter, we must know you are.

2010-11 Big12 champs….after swimming all her individual event and 3 different strokes on 4 different relays we went to watch that Sunday at the dark (they hadnt even turned on all the lights) and quiet swim center as she swam for her time….again. we watched her sitting beside the new head coach listening and nodding. Then it was time. Her body is small…but her heart was big. She swam a time that made the cut.
Still one of our and also her favorite swim memories. Congrats to the Northwestern swimmer!!!

I feel like Salo gets the kids who are already fast

I love how you break this down into 6 simple steps. But seriously, congratulations! This is a wonderful achievement and an amazing note to end on, way to go Chiu!!!

After seeing the picture, my first thought was… dude, if you are that close, put a freaking cap on.

Chris, I love your article, especially what you mentioned in step 4. Thanks for sharing your thoughts.