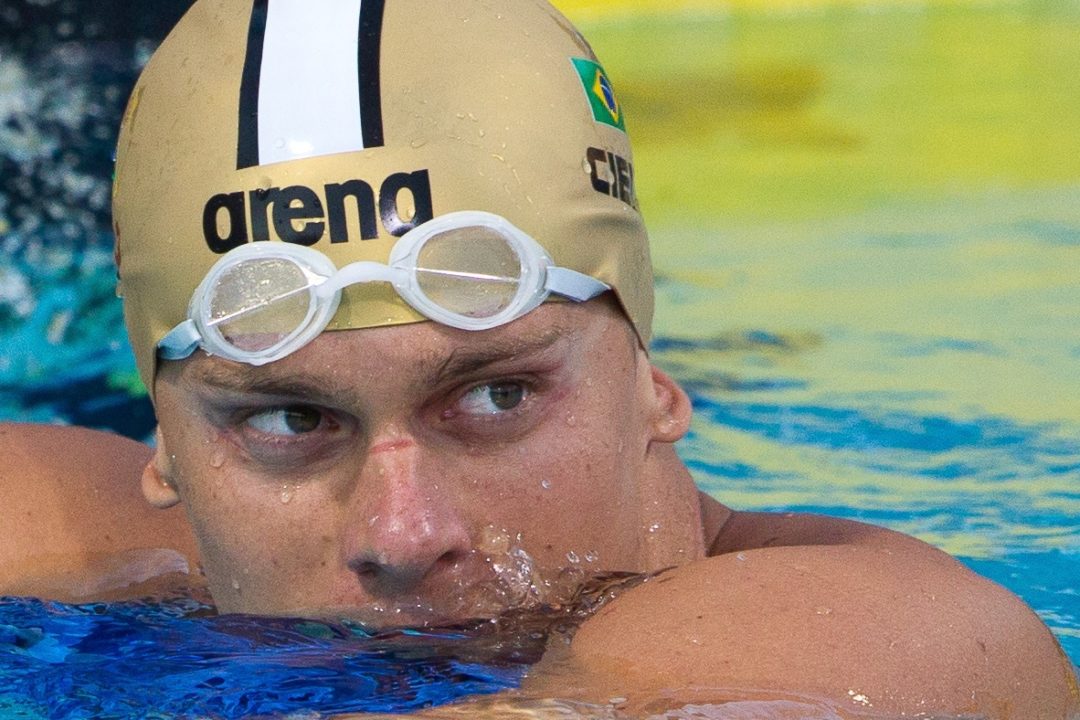 With the current king right next to him, Cesar almost took down an all-time mark in Rio. (Photo Courtesy: ©Tim Binning/TheSwimPictures.com)

Night 2 at the 2012 Maria Lenk Trophy and Brazilian Championships was a scorcher, as the two biggest names in Brazilian swimming (Cesar Cielo and Thiago Pereira) looked as good as they’ve looked in the past two years. But the Brazilian women, surprisingly, also stepped up bigtime on this day, including the earning of the first women’s Olympic spot by Gracielle Hermann.

Cesar Cielo came within a hair of nipping a new textile best in this men’s 50 free with a 21.38. That just missed the 2010 by Fred Bousquet of 21.36 that is the fastest ever done outside of the rubber suits. I think that with this swim, which was way faster than anybody went in 2012, Cielo puts himself within range of breaking his own World Record of 20.91 that once seemed like such an unbelievable time that it would take years for sprinters to catch up to it. Cielo is surely rested for this meet, but not fully tapered, so the textile best (with all things going right) should be toast in London.

How does this affect the 100 battle? All of a sudden, Australian James Magnussen, who showed impressive new-found 50 speed at Aussie Trials, doesn’t look totally untouchable. If Cielo can come out with a two-tenths or so lead into the turn of the 100, anything could happen on the back-half. Watch carefully Cielo’s pacing in the 100 later in this meet. As for this race, his goal was to go faster than he has ever been in textile (21.52 was his personal best), and that he soared by.

Fellow Brazilian Bruno Fratus took 2nd in 21.76; he was a 21.70 in the prelims that now leave him and Cesar as the first-and-second fastest swimmers in the world this year.

And the Frenchman Bousquet, still the textile-king, took 3rd in 21.79. That’s number four in the world this year, and if it had come at French Trials a few weeks ago instead would have put him onto their Olympic Team. Thus is the fickle nature of the sprints – right time, but the wrong meet. He was 22.0 at French Trials.

Nicholas Dos Santos took 4th in 22.07, and American-trained Marcelo Chierighini swam easily a best time of 22.34 for 5th. Chierighini is focused on the 100 at this meet, but this 50 seems to be a great omen for the longer race that is his preference.

Whatever training that Thiago Pereira is doing now that he’s back home in Brazil working with the PRO 16 group, it’s working. He showed that off by swimming a new Championship Record of 1:57.11 to kick off the men’s competition on the second day of the meet; that’s the second-best time in the world (behind only the great Mr. Phelps) and the fastest he’s ever been in textile. Assume that he was pretty rested for this meet, but if he avoids the implosion that he had last year in Shanghai, this swim might have made him the favorite to join the Americans on the medal stand.

This is actually the fastest swim by any non-American in the last two-plus years (since the rubber suits went away). But Pereira was still not happy. He wanted to swim a 1:56 in this meet, but came up just short of that.

Henrique Rodrigues also locked up his Olympic spot with a 1:58.91 for 2nd; that’s the best time of his career. Former Michigan Wolverine Andre Schulz finished 3rd in a less-than-exciting time of 2:01.45

In the women’s 200 IM, Joanna Maranhao pulled a fairly huge upset to win one for the Brazilian women, in taking the title in 2:14.63. With a brilliant sprint to the finish, she out-raced Spain’s Mireia Belmonte, who currently sits in the world’s top 5 but here finished 2nd in 2:14.66.

But the club of both women, Flamengo, will be thrilled regardless of the .03 difference, as this gives them a 1-2 finish and big points to keep them in a team battle that could have easily slipped away on this second day.

Maranhao didn’t improve her best time on the day, but she’s still on some solid training for the meet. She got pretty sick recently on a training trip to Mexico (salmonella is the rumor), and that really threw off her timing. She’s qualified for the Olympics in the 400 IM, and may have to settle for that (though she’ll probably try again at the last chance meet in early May).

Jeanette Ottesen from Denmark scored big points for her team-away-from-home, and meet-leaders, Corinthians by winning the women’s 50 free in 25.06. She was a bit faster in the prelims at 24.98, but those sprint times coming about dead-even between Danish Nationals in March and the European Championships in May are a very encouraging double for her.

The top-finishing Brazilian was Gracielle Hermann in 25.15; she’s still relatively new to the elite level of the sport, but at only 20-years old has a bright future; she’s already the third-fastest Brazilian in history with this lifetime-best, and is within a few tenths of the Brazilian Record. That does dip her again under the FINA Automatic Qualifying Time, and seals her up as the first officially-qualified female member of the Brazilian women’s Olympic Team.

Jeanette Ottesen won her second race of the night in the women’s 100 fly with a 58.64; that’s an outstanding swim for her, especially on her second of the night, and is close to her best of last year as well. This could be a serious event for her in any other year, but women’s 100 butterflying seems to be in a bit of a golden age right now where it’s going to be extremely challenging to knock off for a medal.

That swim extended Corinthians’ lead to nearly 100 points; in a meet where female internationals can make a huge difference in the team scoring, Corinthians is winning that battle so far.

Daynara de Paula took 2nd in 59.23. She was under the FINA A-cut early last year, but hasn’t repeated that at any of the official Brazilian Olympic qualifying meets. Fabiola Molina took 3rd in 59.69.

Glauber Silva took the win  in 52.46,  shaving nearly four tenths off his 100 fly from the South American Championships where he upset defending champion Albert Subirats of Venezuela. That’s a best time for him, but unfortunately will leave him just short of an Olympic spot thus far.

Better known for his 200 fly and his short course meters world record performances, Kaio Almeida was second with a 52.62.  Marcos Costa Ferreira was third with a 53.09.

On strength of Cielo’s win, as well as sweeping the meet-ending 800 free relays, including a Meet Record there by the men, Flamengo lept out to a slim margin after two days of competition. Thanks to a great day by Minas (including three of the top four in the men’s 1500 free) this meet remains a four-team battle that should see the lead change a few more times before all is said-and-done.

Most swimmers from the PRO 16 team are not tapered. Pereira said he trained yesterday. His finish was awful – he could’ve been 1:56.9 easily!

not going to happen, that is unless Cielo is taking his furosemide-laced coffee again.

in his interview, Cielo said he is at 99% for this Maria Lenk.
So unless Cielo lied, I take it that he is tapered.

That, or a taper only affects 1% improvement for Cielo.

Completely agree with aswimfan. This is a 0.14 sec lifetime textile best whilst at peak form. That doesn’t equate to an easy 0.50 drop to make the WR ‘toast’. 100 will be interesting, but I can’t see Cielo getting below 47.50.

There is no way Cielo will drop 0.5 seconds.
Half of that is likely.
Scuba Steve,
i believe he will be faster(in London) than 47.5.It looks everyone forgets he made 47.84 at ALTITUDE and with crappy start blocks and WITHOUT any one to push him.

Funny that Cielo is faster now without his “furosemide-laced coffe”. Heck, even Bousquet is faster here than he was at his Trials, which is a shame: the guy is a true champion!

What Cielo said is that he still had a big chunk of hard training before London. He said nothing about taper or resting.

All Cielo said was that he was feeling good: “at about 99% of my capacity” because it was important to feel where he was at: he wanted to swim fast. That comment was a reference to his level of conditioning.

Kaio Marcio said the same thing: “I rested a little, in order to see where my training is, and what kind of adjustments… Read more »

NADADOR: “even Bousquet is faster here than he was at his Trials, which is a shame: the guy is a true champion! ”