Chris Jacobs, The Godfather of the Olympic Rings Tattoo 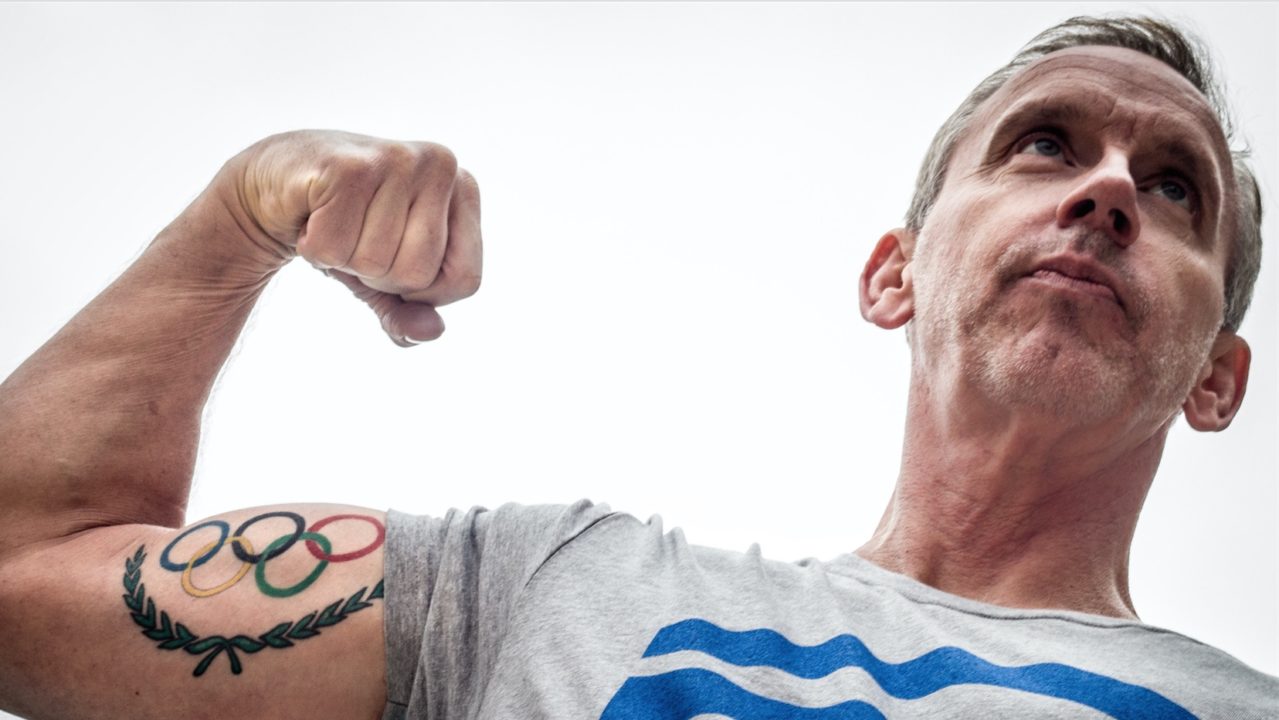 The iconic fashion statement for swimmers started in 1988 with a set of inauspicious Olympic rings etched inside another tattoo and covered by a swimsuit. Archive photo via Gold Medal Mel Stewart

With the world shutting down, we’re reaching into our archives and pulling some of our favorite stories from the SwimSwam print edition to share online. If you’d like to read more of this kind of story, you can subscribe to get a print (and digital) version of SwimSwam Magazine here. This story was originally published in the 2017 Spring edition of SwimSwam Magazine.

Perhaps the most unifying fashion statement for Olympic swimmers started — as far as swimming-tattoo historians can tell — in 1988 with a tiny set of inconspicuous Olympic rings etched inside another tattoo and covered by a swimsuit.

Olympic champ and world record-holder Chris Jacobs is credited with being the godfather of the Olympic rings tattoo after getting his iconic ink after the 1988 Olympics. But Jacobs’s recognizable bicep tattoo wasn’t the groundbreaker.

During his freshman year at the University of Texas, Jacobs got the school’s Longhorn mascot discretely tattooed underneath the line of his swimsuit. After swimming at the Olympics in Seoul in 1988, Jacobs stopped in Hawaii to add the Olympic rings between the mascot’s horns.

“Obviously, they were tiny,” Jacobs said. “A few years later, I decided that I’d like to have some sort of visible tattoo. The only two things I felt were worthy of being placed on my body were the Longhorn and the rings.”

Jacobs ultimately went with the rings on the inside of his right bicep.

Twenty-six years later, Jacobs’s ink has become a sensation among swimmers, with the Olympic rings tattoo considered by some an almost integral part of making the Olympic team.

“I’m not sure if any of the guys from 1988 got the rings, even many years later,” Jacobs said. “It seems that they started becoming much more popular around 2008. … Once Michael [Phelps] got his, it became the thing to do.”

Jacobs went into the business world, and his experience tracks the growing acceptance of tattoos in the job market.

“I spent 20 years in credit sales and trading for top investment banks,” Jacobs said. “The majority of my colleagues never knew I had a tattoo, as I always wore shirts with long sleeves. On the few occasions that someone saw my rings and asked about them, they always responded very favorably. People always seem to enjoy hearing about the Olympics.

“Visible tattoos are becoming more accepted these days,” he added.

He now works as managing director for Like A Pro, which connects professional athletes to fans, and says he finds the rings are an asset.

“The rings give me a level of credibility with professional athletes,” he said. “Whenever I’m meeting with an athlete and it’s situationally appropriate, I’ll leave the rings uncovered.”

Just wrong. Olympians have getting the Olympic ring tats for way longer than that. We just weren’t as cocky as they are now. They were small, and under the suit line. Not for public viewing.

First I saw was Canadian Olympic backstroker Steve Hardy at Arizona State in the late 70’s.

As a kid, I thought this guy was amazing. I’m sure he’s still awesome. Great to see an update on him!

The rings were very popular beFore Phelps….he doesn’t credit for everything

Great to get an update on Chris. I remember clearly the day Chris unveiled, so to speak, his Longhorn tattoo! At that time tattoos were rarely seen on the pool deck. It was a bit of shock and awe!

The Canadian swimmers got a Canadian leaf after the boycott in 1980. And from then on you had to win an Olympic medal to get the leaf tattoo

No, incorrect…..you just had to make the Oly team to have “earned” the right, not win a medal.

No, incorrect. Back in the 80’s most of the elite Canadian male swimmers had the tat on their chest whether they were Olympians or not. It was just a way of showing their love and pride for Canada.

Leaf and Rings for Olympians, Leaf for National Team
Graham Smith was first.