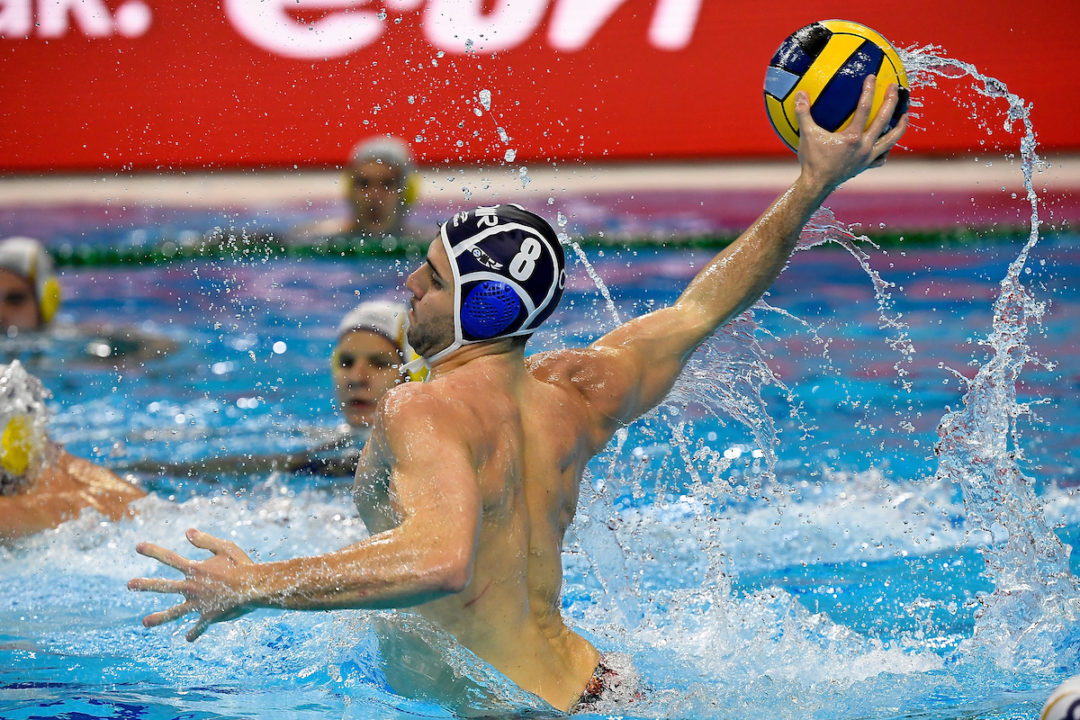 Recco demolished Jug in the big match in Ostia to hand the Croats their worst-ever beating (18-3) in Champions League history. Current photo via © G.Scala/Deepbluemedia/Inside

Expect the unexpected: Recco demolished Jug in the big match in Ostia to hand the Croats their worst-ever beating (18-3) in Champions League history. Marseille stunned Olympiacos to earn its most valuable win during their tenure in the competition. Title-holder Ferencvaros looked a bit weak without its three top players but somehow found the way to edge out a full- strength Barceloneta at the end. The German teams are also on the rise: after finishing 0/6 combined in December, Spandau claimed a brilliant victory over Ortigia and Hannover beat Dinamo in an extraordinary match where the Georgians could score their first goal 1:35 minutes before the end.

Water polo fans were eager to watch the highlighted game of this week, Recco v Jug – two greats with plenty of outstanding matches between them, including two semi-finals from 2016 and 2017 when Jug upset the Italians who hit back in 2018. Well, they might have watched the encounter in disappointment – Recco was there, Jug was not. At least the Jug we all know.

The Croatians got their first blow right in the first period which they lost 4-0. They could score their first goal at 5-0 after 9:19 minutes, from a penalty. What came after was a nightmare for them. They were unable to send the ball behind their compatriot Marko Bijac who posted some great saves but the hosts’ defence also did a tremendous job while the bewildered Croats had one miss after the other – if they could take a shot at all. The total number of shots was telling (32-22), but even more the shots hitting the goals (25-12). As time was passing, Jug was sinking deeper and deeper and had to face the possibility of suffering their worst-ever defeat at the European stage.

It stood 14-1 after three periods and despite Bijac was substituted, it continued the same way until 16-1. After netting a single penalty goal in 27:35 minutes, the Croats managed to score two from action but there were two more in Recco’s bag to finish it 18-3 – indeed a historical loss for the four-time champion.

Marseille finally made it: after three tight losses in December and a hard- fought draw against Spandau here in Monday, they claimed their first win. Stunningly, it came against 2018 winner and 2019 runner-up Olympiacos whose composure seems to have been weakened recently. The Greeks missed two man-ups in the opening period which ended in a rare 0-0, then came the French with three fast goals in two minutes early in the second. That woke up Olympiacos, though they needed 12:50 minutes to score their first but soon they added two more for 3-3. Still, Vladan Spaic’s fine centre action gave the lead back to Marseille by halftime.

The third followed a similar pattern: the French rushed ahead for 6-3 in 40 seconds but Olympiacos tightened up, staged another 3-0 surge – all goals came from 6 on 5s – and a quick exchange of action goals settled the scoreline at 7-7 before the final period. Again, in the fourth Marseille had a great opening, two brilliant man-up finishes from Ante Vukicevic and Andrija Prlainovic respectively gave them a 9-7 lead early – and that was enough. In the remaining 6:38 minutes they couldn’t score more but the Greeks’ lonely goal came only 68 seconds from time, in a 6 on 4. They had one more chance for a counter, but the pass from the Greek goalie was too long from the back and his colleague Dejan Lazovic stole it at 5m at the other end.

It seems that Spandau regained its strength as the Germans stunned Ortigia in the second day’s opening match in Ostia. They were out of shape in the first tournament and suffered big defeats and even though the German national team crashed out from the Olympic Qualification Tournament, at least the players had some playing time – something they badly missed in 2020 – and the Berlin club benefitted from that. Plus its Hungarian goalie Laszlo Baksa came up with a spirited performance (12/18, 66.7%), delivered four huge saves in a row in the decisive phase of the match when Spandau jumped to a 7-2 lead with three connecting goals.

Ortigia seemed to be a bit worn out after its heroic but lost battle to Jug on Monday – they were unable to score for 8:51 minutes and that cost them the game. They had a better spell early in the third when they came back to 8-5 but they didn’t have the necessary sharpness to carry on and Spandau could keep the gap at four goals before the last period. Losing their desire, the Sicilians could not score in the last 11:24 minutes and went down by six – based on the previous rounds, that a huge blow for them: instead of improving their position to fight for the Final 8, they were dropped to the bottom in the ranks.

The other group also offered some unexpected stories on its first day. Title- holder Ferencvaros entered the second bubble with the most worrying signs: Covid-19 tore the team apart once more in mid-January, was missing three key players including captain Denes Varga who is still in quarantine, so many expected that once Barceloneta, the dominating side in December, took control, the game would turn into a one-sided contest.

From time to time, Barceloneta earned a two-goal lead but could never expand it to three and Ferencvaros somehow always found the way to score and held on despite they were trailing for most of the time. Then deep into the third they finally equalised for 7-7 and even had a man-up after a time- out but could not take a shot at the end while Barceloneta hit back with two goals in 59 seconds for 7-9 and that looked like a turning point. The home side, however, was far from being broken and in a span in 50 seconds it was even again, still inside the third.

The fourth brought an enormous battle: Barceloneta lacked its usual speed which might have killed the tiring Magyars, still, with 3:35 to go Alberto Munarriz’s 6m shot hit the back of the net for 9-10. But the psychological advantage was gone immediately as Gergo Zalanki saved a dying possession with a fine action shot from the wing and soon Ferencvaros had a second try to convert a man-up after a time-out while the score was tied. This time they succeeded, Tamas Sedlmayer sent the ball home 2:06 from time and the Spaniards couldn’t respond to that. Their last chance in a man-up was denied by the hosts’ second goalie Andras Gardonyi – he offered 8 saves, Dani Lopez had only 4, Barceloneta was 2 for 11 in 6 on 5s – so Ferencvaros took the lead only once in this game: at the very end. That left no undefeated team in this group.

Dinamo Tbilisi caused an upset in the first stage by beating Jadran so they were the favoured ones against Hannover which had three rather bad encounters in December. Then the game was a total denial of all expectations: Hannover was the dominating side while the Georgians seemed to get a special vaccine – against scoring. They could not net a goal from the cleanest opportunities, even from a 6 on 4 after a time-out. No other team in the league had to wait so long for its first goal in a game in the group stage: it came 1:35 minutes from time, at 9-0 – until that Dinamo was 0/30 in front. (Previously, AZC Alphen had the lowest scoring match when the Dutch lost 19-1 in Recco but scored that goal 5:56 minutes before the end in the 2017- 18 season.) They added two more to ruin Moritz Schenkel’s perfect record – the German goalie was 18/18 before conceding three in the last 95 seconds.

Only the third game between Jadran and Brescia did not offer surprises – the Italian side kept the game under control right from the beginning and jumped to a 1-5 lead. The young Montenegrin side fought bravely and in towards the end of the second quarter they climbed back to 3-5 when the Italians’ level of concentration dropped significantly and only Marco del Luongo’s saves kept Jadran in two goals distance.

Brescia’s ‘sleeping’ period in front lasted 9:58 minutes, then Niccolo Gitto netted a 6 on 5 from close range for 6-3. At least their defence worked well in the meantime as the Montenegrins were unable to create any danger, not even from their two man-ups late in this period which ticked down without any shots. After the second miss, Giacopo Alesiani finished the ensuing counter for 3-7, redirecting the match onto its calm path.

Stats were highlighting the differences: Brescia outshot Jadran 27-13 in three periods, while Petar Tesanovic had more saves, 13, than the number of shots del Luongo had to deal with altogether during this time (9). It also showed why it was a bit of a wonder that only four goals separated the sides. The gap didn’t grow significantly later as Jadran could find the back of the net in quick succession after 13:09 minutes and Brescia also lacked the precision in its passing.

This result divided the group after four rounds visibly, the three favourites have 9 points respectively, while the other three earned 3 points apiece so far.