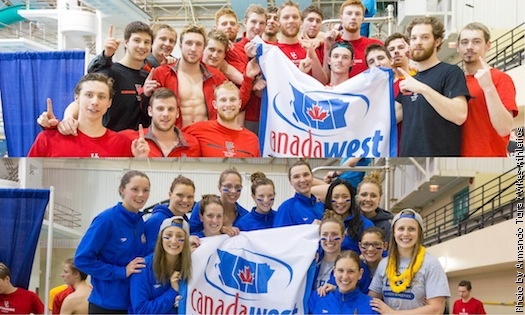 The University of British Columbia Thunderbirds, led by Canadian Olympian Savannah King took home the Felstad Memorial Trophy as the...

The University of British Columbia Thunderbirds, led by Canadian Olympian Savannah King took home the Felstad Memorial Trophy as the top women’s team at the Canada West University Championships, while the University of Calgary men, led by senior Jason Block walked away with the E.W. Griffiths Trophy for the men’s team title.

Rookie of the Meet Tianna Rissling of the University of Calgary was impressive winning both the 50 breaststroke (31.11) and 400 IM (4:39.22) in meet record time.

Women’s Coach of the Year UBC and Thunderbirds Head Coach Steve Price was satisfied with his team’s performance but knows they will need to be better at the Canadian Interuniversity Sports (CIS) Championships, which will be held in Calgary from February 21-23rd.

“I am pleased with how our teams battled, both the women and the men,” said Price. “We have a young men’s team and was really impressed with Coleman Allen stepping up and Savannah King’s performance but still a lot of work before CIS nationals.”

Although Allen’s performances were impressive they were not enough to stop the University of Calgary Dinos from taking the team title. The Dinos were led by Jason Block who swept the breaststroke events and was part of the meet record setting 400 medley (3:37.06) relay team. Block also set a meet record in the 50 breaststroke in a time of 27.92.

The University of Calgary also got considerable contributions from another one of their all star rookies Russell Wood. Wood who won male Rookie of the Meet, swept the backstroke events setting meet records in the 100 (53.07) and 200 backstroke (1:56.40).

The female Coach of the Year, University of Calgary Head Coach Mike Blondal was impressed by his team’s work ethic, “It’s always a battle with UBC and it came down to the last two events. We worked hard and are still at work but really excited about the win.”

It’s sad to see Canadian varsity swimming so far behind the NCAA. Most of the “winning” times if converted wouldn’t even make the championchips NCAA meet.

They have to start somewhere US men go back over a century with dual meets and since late 1920’s with championship and women in 60’s with AIAW and then NCAA. That is something that other countries are missing the HS and college programs and drive they help with in addition to clubs and “y”s. when these countries are concerned about their results the Canadians are trying something. Of course our system does it’s part with having the foriegn swimmers in our programs getting at least that benefit. Since the 50’s we have helped influence other countries. Used to be they didn’t swim short course with any interest and were poor on turns. My how time changes give the Canadians credit… Read more »

This meet would be more equivalent to a conference championship and the top times would be competitive at those meets.