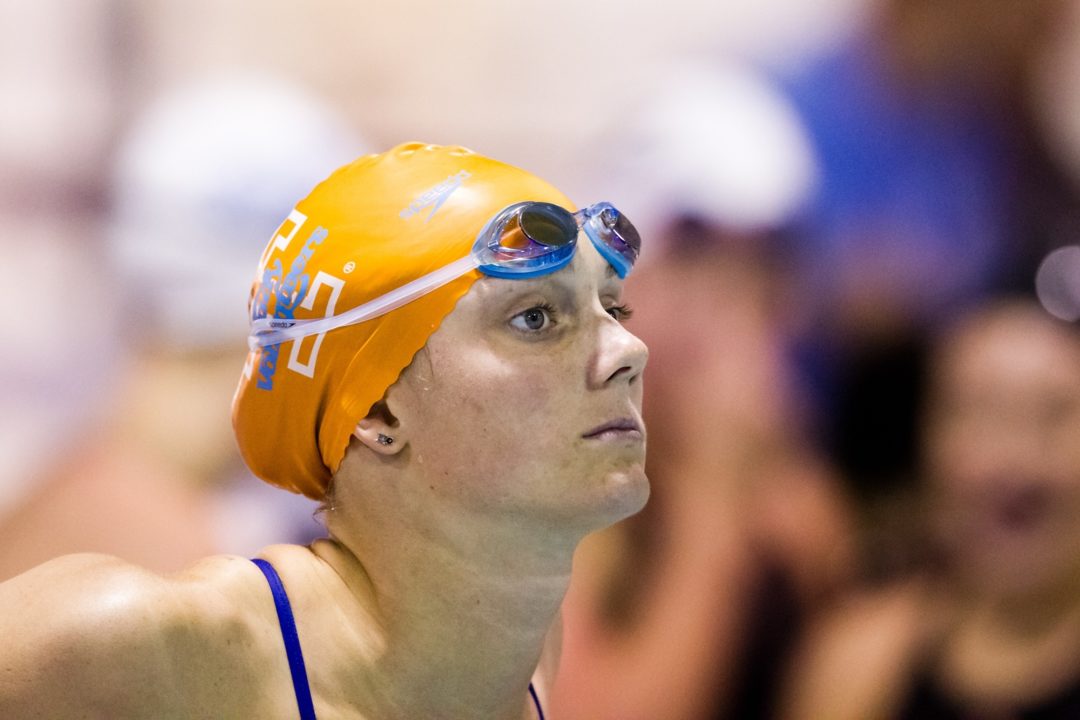 The Tennessee Volunteers, historically, are one of the country’s great swimming programs; one need look no further than the massive complex they have on campus to see the evidence of that. In the late 2000’s, though, they slipped a bit out of that super-elite upper-crust of teams who are perennial in the top 10, looking at the top 5.

On Saturday, at high noon, with emotions running wild on senior day, the Volunteers announced their re admittance into that group by toppling the Georgia men and Georgia women in Knoxville; Matt Kredich’s ladies took the victory 161-139, and his men were 161.5-132.5.

Each victory was surprising in its own way. In the women’s meet, Tennessee had nearly a perfect performance. They won the races that they were expected to win, like the 100 fly where Kelsey Floyd was a 52.51; or the 200 fly, where she was a 1:56.32. Both of those times lead the nation this semester: the latter in a tie with 200 fly favorite Cammile Adams from Texas A&M.

Rather, the Tennessee wins also came heavily in races where they could be deemed big upsets. Like the 50 and 100 free, where freshman Faith Johnson topped Maddie Locus and Megan Romano in the 50 with a 22.47 to Locus’ 22.87 and Romano’s 22.91. She then turned around and won the 100 in 49.71, a tenth ahead of Georgia’s Olympic Champion Allison Schmitt in 49.81.

Tennessee also took a sweep of the relays; again, the medley was not unexpected, though maybe the margin over an improved Georgia medley was: Tennessee was a 1:38.71 to the Bulldogs’ 1:40.47, and that was without Johnson anchoring. Lauren Solernou is stepping up more-than-adequately this season in stead of the now-graduated Jenny Connolly. She got Tennessee out to a big lead with a 25.58 backstroke split on that medley, and also won the regular 100 back in a 54.5.

Then, more surprisingly given the depth and quality of Georgia’s freestyle group, Tennessee won that race in a 1:29.70 ahead of Georgia’s 1:30.26. Kelsey Floyd, who is vital to both the medley and free relays this season, dipped under 22 seconds on the third leg for UT with a 21.96 split. That’s faster than she split on this relay in NCAA finals last season.

That 200 free relay time was their best of this season, as were several of the Volunteers’ swims at this meet. What we have to keep in mind with these results is that Tennessee doesn’t really do a mid-season rest meet, so typical training logic would indicate that they probably come down a little bit earlier in the spring than does a lot of their competition. Don’t use that to undermine the quality of their results, however; regardless of where in the training cycle they fall, this was a great set of times for the Volunteers.

There were a few bright spots from Georgia. Sophomore Amber McDermott won the women’s 1650 in 16:07 and swam a very solid 4:49 in the 500 (though there she was beaten by a 4:44 from Tennessee’s Gendron). Their other swimming win came from freshman Hali Flickinger in 1:58.33. Perhaps most significant in the long-run, though, is the points Georgia got from diver Laura Ryan, an Indiana transfer. Historically, diving is somewhere that Tennessee has absolutely trounced Georgia. This year, however, that story is changed. Ryan won the 1-meter with a score of 299.63, six points ahead of Tennessee’s Tori Lamp, and was 2nd to Jodie McGroarty on the 3-meter, though not by much. That’s three All-Americans going at it, and for Ryan to come away with even a split really adds a new dimension to the Bulldogs for their championship season.

The men’s meet, though unexpected, was definitely a different feel from the women’s. Unlike their women, the Georgia men won a lot of races; just like they’ve done all year long, their young freshmen and sophomores stepped up and performed very well. Tennessee, however, fought back after every Bulldog win: a ferocity honed in the last 24 months of tumult in the program where their assistant passed away from brain cancer, their best swimmer left the program, then their head coach was removed amid many misdeeds, then were folded into a women’s team that has had a lot more recent success, then they thought their best swimmer was going to come back and he wasn’t. This team has been through a lot, and this will be a big morale-boosting win for them.

Tennessee started things off with a very impressive 200 medley relay of 1:27.17, which soundly beat Georgia’s 1:31.36. A 21.3 from Oystein Hetland on the fly leg and a 19.3 from Ed Walsh to anchor were really nice surprises for this team.

That race, though a sound thumping, wasn’t all bad news for Georgia, however. They got a 22.7 backstroke split on the B-relay from redshirt freshman Anival Rodriguez; that beat Ty Stewart’s A-relay swim by six-tenths. For a team that’s not really built around their skill in the 50 yard races, finding a guy who is within range of getting down to a 21 in his 50 backstroke at year’s end would be a big bonus.

Not surprisingly, the Georgia distance group dominated the mile, with Andrew Gemmell winning in 15:17 to Will Freeman’s 15:20.31. The Bulldogs’ defending NCAA Champion (in both the 500 and the 1650) Martin Grodzki was absent from this meet, as he has been all semester save for a single race against NC State earlier in the month.

Next the meet moved into the sprints, where in the 100 free, Tennessee really put some hurt into the Bulldogs. They went 1-4 in the event (though only the top three counted for points) led by Sam Rairden in 43.97 and Ed Walsh in 44.45. Georgia’s top finisher Jameson Hill was 5th in 46.11, and their super-freshman Matt Ellis was 6th in 46.33.

Other great swims for Tennessee included freshman Sean Lehane winning a big class battle to top both freshmen Stewart and Rodriguez from Georgia and sweep the backstroke races. Lehane swam 48.5 in the 100 and 1:44.6 in the 200; those are both season bests for him, and his 200 is one of the races where they’re counting on some scoring at NCAA’s.

For Georgia, freshman Chase Kalisz did about the only thing he’s done since joining the team a few weeks ago: won. He actually took a three event run starting with a 1:46.8 in the 200 fly, a 1:58.0 in the 200 breast, and a 3:49.8 in the 400 IM. There’s few swimmers of any age in the country who could’ve pulled that off, though if there’s a race where there’s a history of freshman performing very well at NCAA’s, it’s that 400 IM. Those are all best times for him since joining the Bulldogs, and the 200 breast and 400 IM both rank 22nd in the country now. That should make him feel really good, given that he didn’t have the mid-season rest meet that most of the country have to hit qualifying times, about his chances of relying on SEC’s to get into the NCAA meet; really, with the new qualifying system, he’s about there already, but even a small drop of maybe a second per race should lock up his first NCAA qualification.

Agreed. I think the Vols were probably weren’t as tired, coupled with the energy and excitement of a home meet and senior day, and it’s pretty clear that Georgia has been training really hard. Still, it was an upset, no two ways about it.

A powerhouse can fall. Why is it so totally shocking to the swimming world that a dominating streak may end? It happens all the time. Look at Auburn, look at Florida. While they are till top notch schools and any student athlete would be lucky to grace those campuses, competitions must be won and competitions must be lost. Consider the fact that the Tennessee coaching staff is almost 100% new with the assistance of legendary Bill Boomer- with new staff comes new ideas, new incentive to win, and fresh faces to the pool deck. I can bet that those swimmers wanted to send their seniors out on a high note, and beating Georgia would be the highest note of all.… Read more »

First and foremost, It’s obvious Tennessee showed up to the meet while Georgia thought it was going to be a walk in the park. Given it was Tennessee’s Senior Day, what would you expect? Tennessee to spoon feed a meet to Georgia? Take last year for example … Georgia beat Tennessee on ‘their’ senior day, but it is clear that Matt Kredich and his staff came well prepared in the thought Georgia isn’t unbeatable. Congratulations to Tennessee & I cant wait to see what they do at SECs and NCAAs.

That sounds very similar to last year when people insisted that the Lady Vols rested when they beat Florida, but at SECs and NCAAs they went much faster and still beat the Gators. Regardless, it was a great meet for Tennessee. Can’t wait to see what the next few weeks bring!

Surprising to see the Georgia women lose this meet.. However, it will be interesting to see how well the vols are able to hold this taper for another 4 weeks through SECs