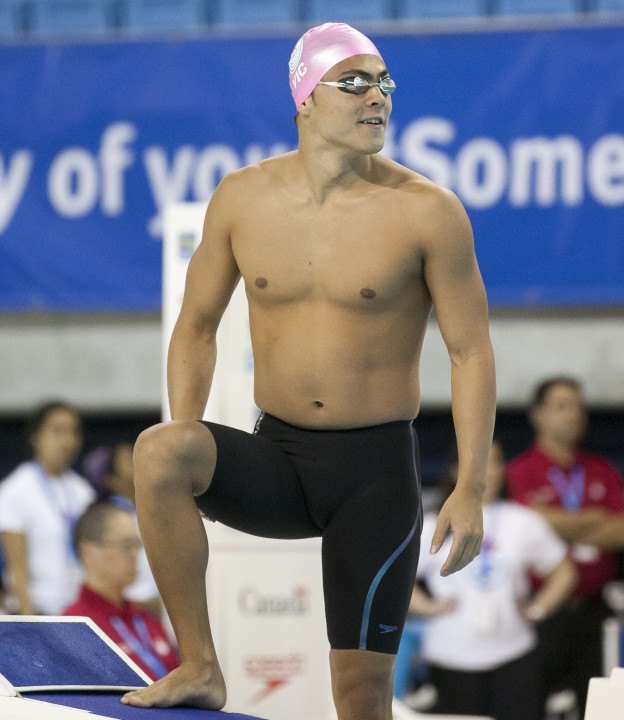 Jeremy Bagshaw and the Canadian men tried to improve their 800 free relay ranking at the end of day 5 finals at the Canadian Olympic Trials. Current photo via Chris Tanouye

Canada and New Zealand swam a time trial in the 800m freestyle relay at the end of tonights final session at the Canadian Olympic Trials, looking to improve their rankings worldwide in order to qualify for the Olympics. The top-12 teams from the 2015 World Championships automatically qualified in the event. Neither Canada or New Zealand fielded a team there, so the alternative for qualifying is the top-4 teams among teams who didn’t qualify (as of May 31, 2016) will qualify for the Olympics. Canada’s time of 7:17.33 from the Pan American Games had them 4th among teams who hadn’t qualified, as they looked to move up. To read the full relay selection process and see the full list of teams in all three men’s relays click here.

The Canadian team of Markus Thormeyer (1:50.48), Yuri Kisil (1:49.79), Stefan Milosevic (1:49.46), and Jeremy Bagshaw (1:48.53) failed to take out the time from Pan Ams, touching in 7:18.26. All but Milosevic split slower than they did in the individual race, as on day five of the meet they are no doubt pretty exhausted. Their combined times from the individual race had them at 7:14.93, a time that would’ve moved past China for 3rd in the qualifying rankings. It will now be a waiting game for the Canadians as to whether or not this relay will qualify for Rio. As it stands now, they’ll make it, but if another country that hasn’t yet qualified passes them in the rankings they’ll be out. If Bagshaw and Milosevic aren’t added to the Canadian roster, Javier Acevedo (100 back) and Ryan Cochrane (400 free) would be prime candidates to join Kisil and Thormeyer on the relay should they qualify. Kisil already qualified in the 100 freestyle and Thormeyer the 400 free relay.

Current Rankings Among Teams Who Haven’t Yet Qualified

Chinese team without Sun Yang had swum a 7:13.19 few days ago