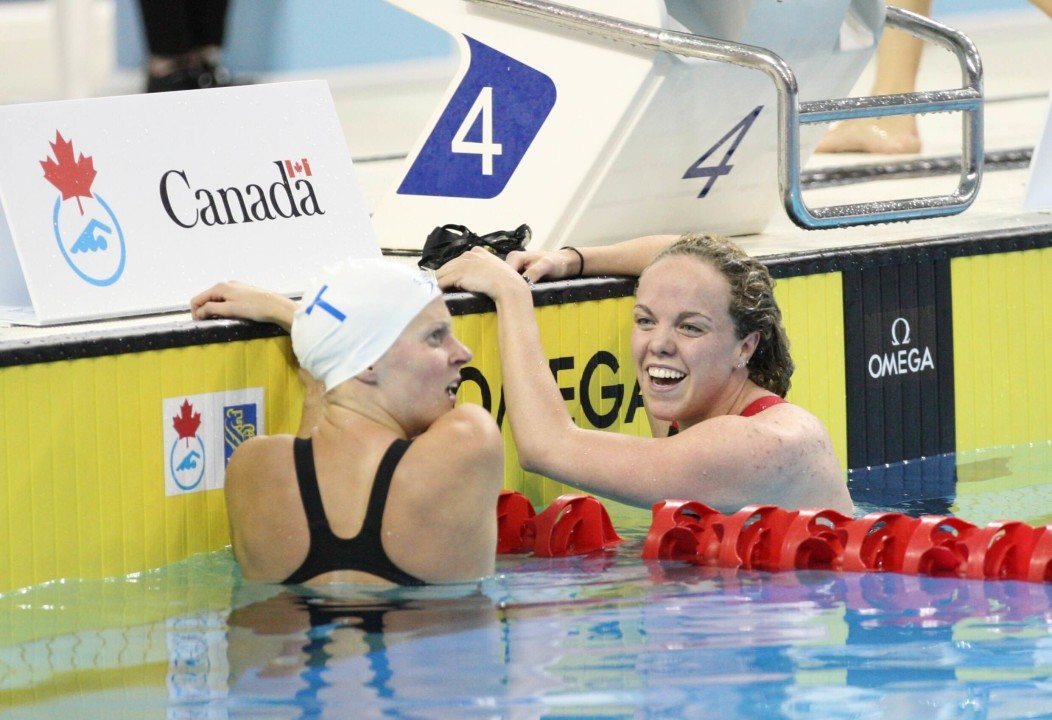 Four more swimmers managed to earn a nomination for Canada's Olympic team on night five, bringing the roster to a grand total of 25 with one day remaining. Current photo via Chris Tanouye/www.christanouye.com

Four more swimmers managed to earn a nomination for Canada’s Olympic team on night five, bringing the roster to a grand total of 25 with one day remaining.

Chantal Van Landeghem, Sandrine Mainville, and Michelle Williams all earned their spot on the Canadian Olympic squad one after another as they finished second through fourth in the 100m freestyle.

Their teammate Penny Oleksiak won the race in a new world junior record, but already made the team in both the 100m butterfly and 200m freestyle earlier in the meet.

Van Landeghem earned an individual performance in Rio, dipping under the FINA ‘A’ cut to finish second in 53.91. Both Mainville and Williams earned relay-only spots for the 4x100m freestyle.

With these four on the relay, there’s a big chance for Canada to medal in Rio. Three of the four have been under 54-seconds in the individual 100m freestyle during their careers.

Following the qualification of the three girls in the 100m freestyle, Martha McCabe secured her spot on her second Olympic team with a silver medal in the 200m breaststroke.

Kierra Smith finished ahead of her, and having already made the team in the 100, added a second individual event. McCabe dipped under the FINA ‘A’ standard, and will have the 200m breaststroke to focus on during her Olympic preparation.

With tomorrow being the last day of the Trials, much of the Olympic team nominations have already been decided. With a few key events such as the men’s 1500m freestyle with Ryan Cochrane tomorrow, the team could grow by a few numbers by the completion of the meet.

The BIG question wlll be if Mr. Atkinson will add a few swimmers to the team for enhancing relays. Perhaps a couple of girls in the 100 Free from last night & also Mack Darragh since he won the 100 & 200 fly. Especially since the men’s team is so small. Why not?