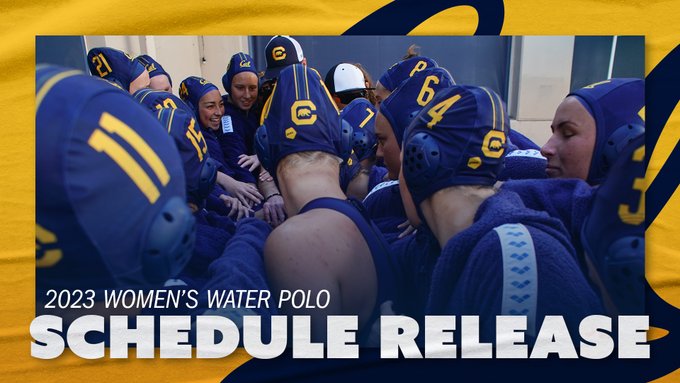 The Cal women's water polo team will play its usual grueling schedule in 2023, with all but two opponents being ranked in last year's final CWPA Top-25. Current photo via @CalWWPolo/Twitter

The Cal women’s water polo team will play its usual grueling schedule in 2023, with all but two opponents being ranked in last year’s final CWPA Top-25 and six that qualified for the 2022 NCAA Championship.

Included in the slate are at least 11 foes that were ranked in the final top 10 last season, with the possibility of more depending on potential opponents during a handful of in-season tournaments.

The Bears open the season with their first home game on Jan. 13 against Cal State East Bay before embarking on a string of five consecutive tournaments, each of which features some of the best teams in the country. Among them is the Cal Invitational on Jan. 28-29 at Spieker Aquatics Complex, an event that includes defending NCAA champion Stanford, NCAA semifinalist UCLA, NCAA quarterfinalist Fresno State as well as UC Davis and San Jose State.

Cal will appear on the Pac-12 Networks twice during the season – March 11 at home against NCAA runner-up USC and in its regular season-finale at Stanford on April 22.

The MSPF Championships are slated for April 28-30 at San Jose State with the NCAA Championship scheduled for May 12-14 at the University of the Pacific.

The Bears advanced to the semifinals of the NCAA Championship last season and finished the year with a record of 17-6. Cal returns first team All-American goalie Isabel Williams along with All-American honorable mention attacker Ruby Swadling. MPSF All-Newcomer selections Rozanne Voorvelt and Jessie Rose are also back, as well as senior Cecily Turner – the Bears’ fourth-leading scorer last year.