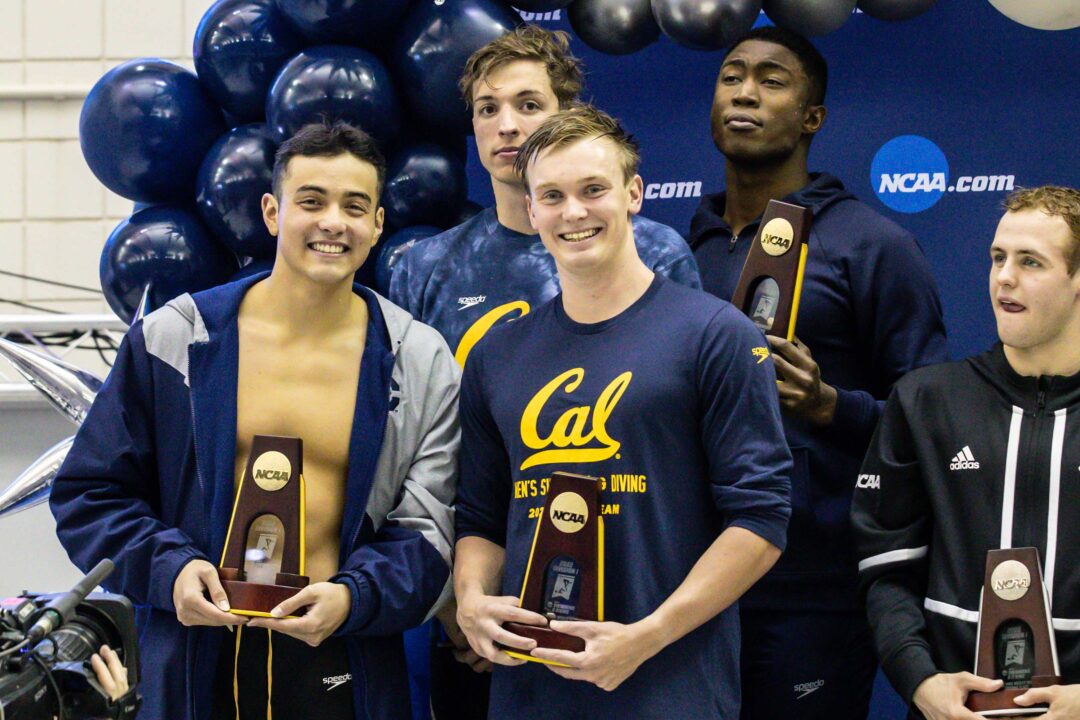 Cal's time of 3:01.81 is faster than they've ever been at invites, and Bjorn Seeliger and Reece Whitely nearly matched their NCAAs split times. Archive photo via Jack Spitser/Spitser Photography

And while Cal’s time from tonight is still a second off the 3:00.36 they clocked to win NCAAs last year, their splits and their dominance over the rest of the NCAA put them in strong contention to repeat for the NCAA title. Whitley’s split of 50.74 was just 0.1 slower than the 50.64 he split at NCAAs, and Seeliger’s anchor leg of 40.74 was also just 0.1 off of his NCAAs anchor.

The two legs that were a bit further apart from their NCAAs counterparts have potential to be faster as well. Lasco led off in 45.07 compared to 44.64 at NCAAs, but he went 44.88 earlier on tonight and is very much capable of dropping more in March. Rose’s 45.26 fly split is still well aways from Trenton Julian‘s 44.44 from NCAAs, but his flat start best time of 45.16 indicates that he can split sub-45.

In addition, track history shows that Cal always improves drastically from midseasons to NCAAs in this race. Last year, they finished third at invites in a time of 3:05.97 before dropping five seconds from that point to the end of the season. Similar patterns followed suit in previous seasons, which you can see in the chart down below:

With Cal being significantly faster this year at midseasons compared to previous years, does this indicate that they are resting more for invites than previous years? Or does it indicate that they will drop major time come time for NCAAs, potentially dipping under the three-minute barrier? We don’t know for sure now, but what we do now is that Cal has clearly established themselves as the early favorites for defending their NCAA title in this event.

1. he graduated and doesn’t swim for cal anymore
2. He is on the Safesport list and shouldn’t be anywhere remotely close to a pool deck anytime soon

Andrew — Please stop posting unfactual comments. The article was comparing a teams performance year over year, including stroke by stroke comparisons, and he was factually on their squad in this event last year.

I’m not sure what his Safesport list status is, and what behavior it may allegedly be based on, and what ways his participation in USA Swimming events is, or in the future may be, affected, but factually — for now — while you assert judgment that he “…shouldn’t be anywhere remotely close to a pool deck anytime soon,” per a SwimSwam note of 11/23/22 USA Swimming named Trenton Julian to represent the USA on the SCM Worlds team for Melbourne, replacing now-injured Luca Urlando for… Read more »