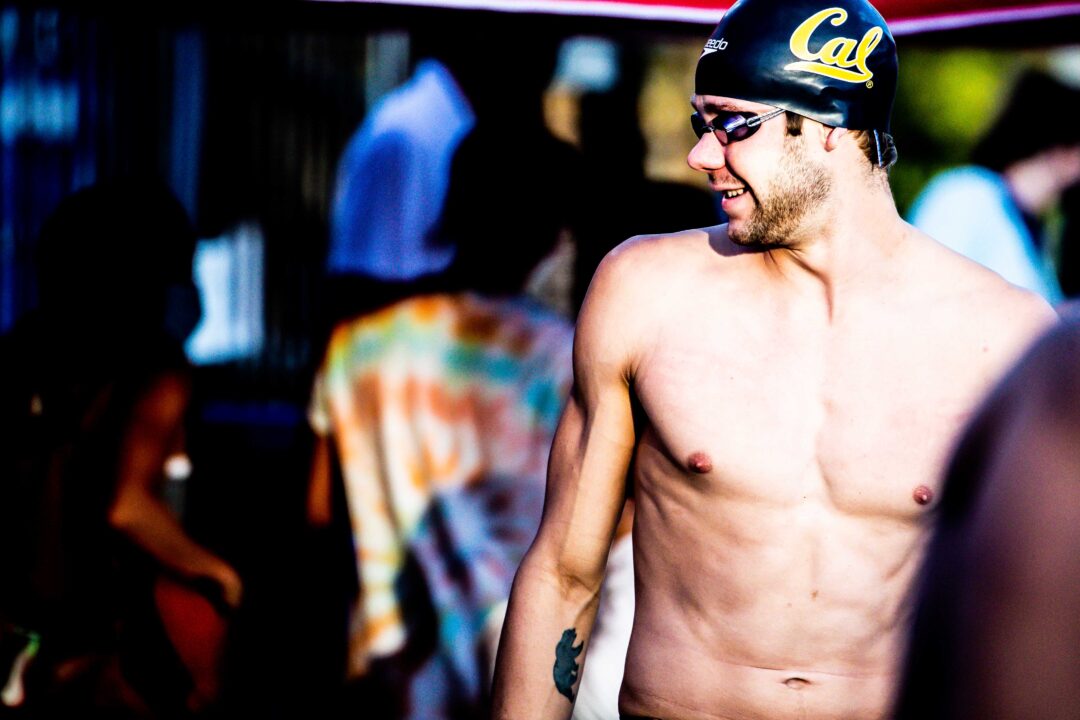 The Cal men’s outlook for the 2021-2022 season has improved dramatically in the last few weeks, with two more All-Americans announcing that they will take advantage of the NCAA 5th year rule next season.

One is Sean Grieshop, who has raced for Cal for his 4 prior seasons of collegiate season. The other is Will Roberts, who swam his first 4 years of school at Michigan, but will transfer to Cal to use the 5th year.

They join Daniel Carr and Trenton Julian, who have also announced the decision to return. In total, that group of 4 swimmers combined for 106 points at the 2021 NCAA Championship meet.

The other big names that Cal is awaiting decisions from are Zach Yeadon, who scored 22 points at NCAAs last year, and Bryce Mefford, who scored 36 points at NCAAs last year. Mefford told SwimSwam on Monday that he was waiting to make his decision until after the upcoming Olympic Games, where he is qualified to race as the 2nd American in the 200 back behind another Cal Bear, Ryan Murphy.

The implication of Roberts’ decision is slightly different than the rest of the swimmers on that list. Under the terms of the NCAA waiver, student-athletes who transfer in order to use their 5th year of eligibility in the 2021-2022 season will have any scholarship money counted against the team’s maximum, which in this case is 9.9.

He also has been a member of the last for U.S. National Teams in the 400 IM.

The other member of that group is Roberts, who will now team up with Grieshop at Cal. Swimming for the Michigan Wolverines, Roberts finished 16th in the 400 IM at NCAAs. That was a 4-second add from his time in prelims.

While his 400 IM swim in prelims at NCAAs in 2021 to earn him a place in finals was a best time, he was short of his personal bests in the two distance freestyle events during his senior year. His bests in those races both came at the mid-season Minnesota Invite in the 2019-2020 season, before the 2020 NCAA Championships were ultimately canceled.

Both swimmers participated in the 2021 U.S. Olympic Trials in June. Grieshop’s best finish came in the 400 IM, where he finished in 16th place, while Roberts was 20th in that same event.

Another current Cal swimmer, Tyler Kopp, placed 18th in that race after advancing as the Wave I winner.

Even with all these returning swimmers Cal is making, Texas still has more returning points, not to mention a stellar incoming freshmen class. It is definitely going to be closer than last year

That will be an epic team. Not sure anyone can compete but I guess we should wait and see if any other team can draw some top ranked swimmers. One a side note kudos to the swimmers maximizing their educational opportunities! I would of loved the opportunity to get acceptance into a top graduate program and have a chance to compete a year on a stacked team.

Cal is recovering from its mediocre OT

How was Cal’s OT mediocre? Having 4 guys make the team is no small feat and should be celebrated.

As well as three more international guys. 7 total repping Cal. Not bad, in my humble opinion. I’m with you Emily….

Anyone know anything about Jarod Hatch taking his fifth year or continuing with the Phillipines team now that he’s graduated?

Please consider doing a 5th year at a tiny little institution in Austin known as the University of Texas. Among the benefits:

1) A wealth of top ranked grad programs
2) You get to swim for a legend in (possibly) his last year of coaching
3) Austin is (still) cool. Lots to do. Great music scene. SXSW. Great BBQ and Tex-Mex.
4) Likely top 2 finish at NCAAs (could be top 1 with your help!)

One of my more favorite posts of late, this from RJM. Great humor. Unique angle. Really creative. Nice job!

Lol, their CS is hot trash. Those rankings are such malarkey.

4
-1
Reply
Seliskar is my baby

Yaedon and Mefford should come back!

Is Will taking Grad classes or finishing undergrad?