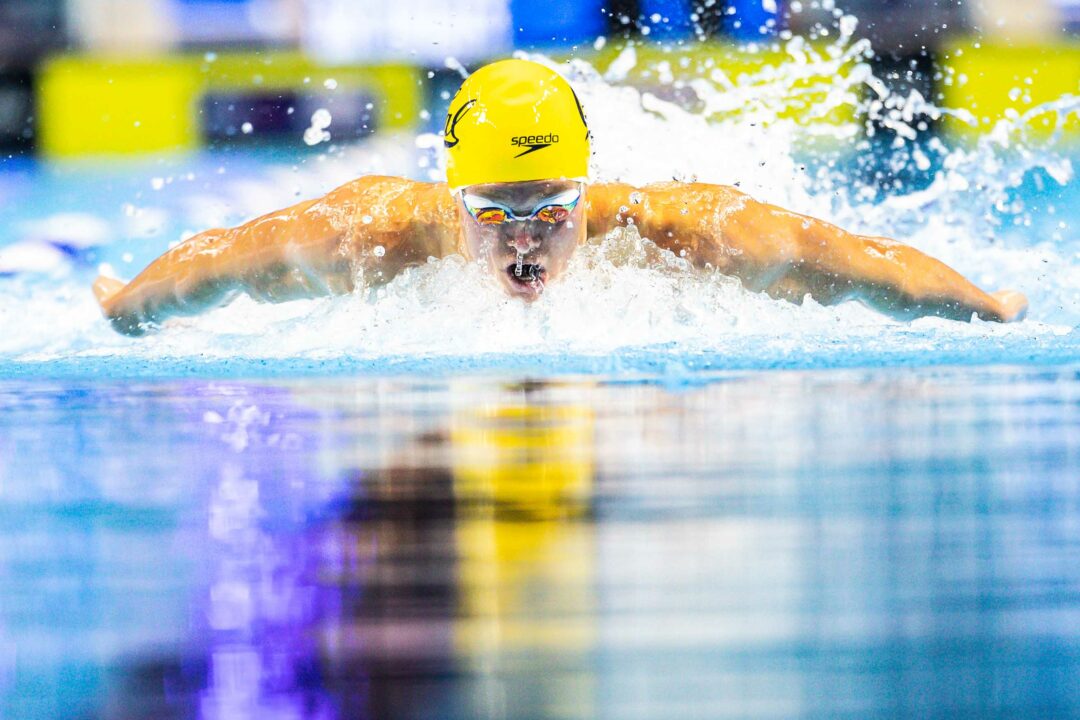 Trenton Julian scored 48 points for the Cal Golden Bears at the 2021 NCAA Championships. He'll return for a 5th season of collegiate swimming next season. Archive photo via Jack Spitser/Spitser Photography

NCAA 200 yard butterfly runner-up Trenton Julian has announced that he will return to Cal for a “Super Senior” season. Julian is one of a number of Division I swimmers and divers who are taking advantage of an NCAA waiver next season that allows swimmers who competed in the 2020-2021 season to use an extra year of eligibility.

Julian says that it made sense for him to return, because he has a semester left en route to his undergraduate degree. He will then work on a certificate program in the spring.

“I’m looking forward to getting a more normal year of training with the team and working towards a National title for one last time,” Julian told SwimSwam.

Only senior Ryan Hoffer, who has gone pro and entered the ISL, and freshman Destin Lasco scored more points for Cal last season.

Very few senior men from among the NCAA’s top teams have announced so far that they’ll take advantage of this rule (4 Indiana Hoosiers are the notable exception). Julian’s return helps Cal balance out a big 5th year announcement from Jordan Windle, a diver at the University of Texas, who scored 52 points at the NCAA Championships. Cal and Texas have been the top two programs in the NCAA for the last decade. Since 2010, the two teams have occupied 21 of the 22 top 2 finishes at the NCAA Men’s Championship meets.

I’ve somewhat forgotten which recruits are going where for 2021. Who’s incoming class is better for next year: Texas or Cal? I know NC State is the top, but it’ll still likely be between the typical two for the title (at least until 2023 which is when I think NCS makes a run at it).

They will have Whitley and Lasco and Seeliger and now Julian and I assume Gonzalez is coming back as well. New guys should include Robin Hanson and Alexy, both very good and can fill in the freestyle relays. So they will still be good but Texas probably is the favorite.

The incoming freshman seem like a wash, though Grimm is such a wild card. If he improves the way Texas freshman often do, then he could be a beast.
Grieshop previously said he’d like to come back for a 5th year, seems like that’s still on the table. Neither Carr nor Mefford went the ISL route; if they were to return as well then Cal’s gotta be the favorites.

I gotta say that with all the seniors Cal has and will potentially have returning, Cal will likely be the favorites next season. I don’t think Texas will have any returning senior swimmers while Cal will likely get the majority back (minus Hoffer).

The other potential game changer is the high profile transfers like Liam Bell, Matt King, David Schlicht…
Commenters in another article mentioned Bell is headed to Cal.

If Bell does goes that route, then Cal definitely has the lead going into this upcoming season. Texas loses Katz, Jiang, Staka, Pomajevich that were all pretty valuable during the 2021 NCAA’s and I just don’t see how the class with Grimm/Connery as the top two can amend the loss that the 2021 class created. Cal is going to be pretty gnarly will all the incoming swimmers and the ones they’re maintaining. They could do some crazy big number of NCAA qualifiers.

You kinda assume Texas sophomore and junior swimmers will not improve. Don’t forget every Texas swimmer scored last year and Katz, Jiang, and Staka’s will be easily made up. Texas freshmen class will score more points that California one.

I ignored all classes besides the incoming freshmen/transfers and the potential seniors that stay on as it’s pretty tough to predict improvements for the sophomores and juniors. Who is to say that the Cal freshmen won’t improve more than the Texas class and outscore them come the big show?

I understand that, but Cal did not have 16 swimmers who scored last year and “scoring experience” is very very important.

My inside sources, say Schlicht is heading to ASU!

Grieshop is coming back for another year. Believe one of Carr and Mefford is staying, I think more likely Carr.

Does anyone know if Jarod Hatch is taking his fifth year and continuing swimming for the Philippines?

Hope he has a fantastic 5th season. Still gutted he got Covid just before trials.

Will he be their relay flyer? Cal is absolutely stacked next year, but without Hoffer their best flyer is a 46 high.