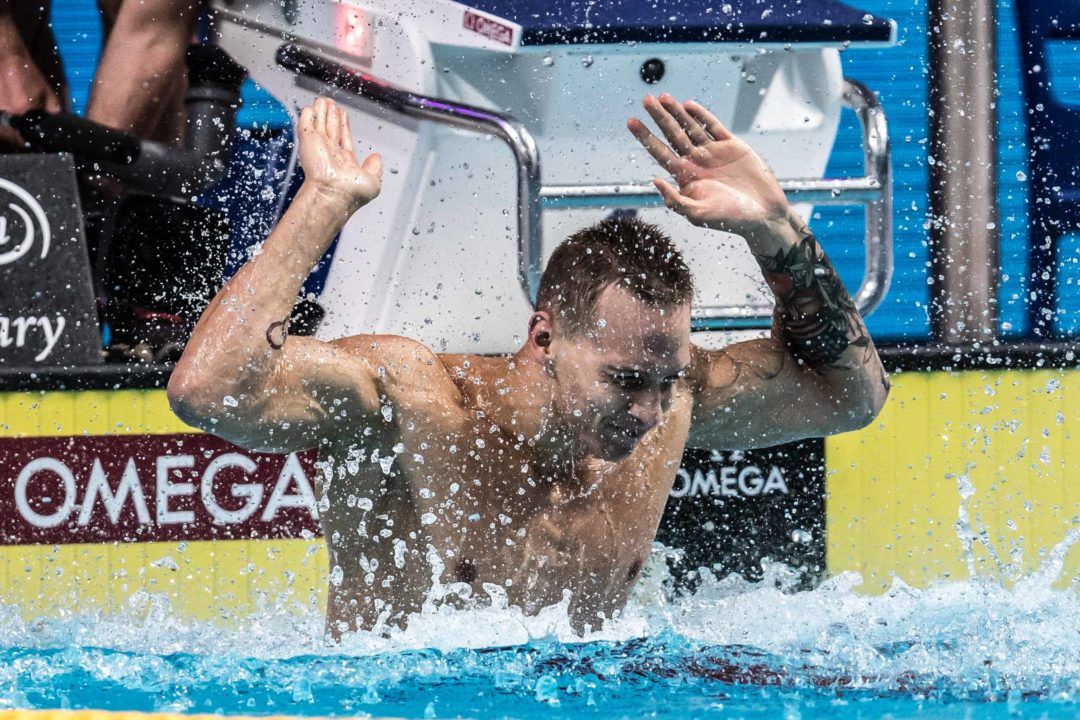 Caeleb Dressel broke the American Record for the third time in 20.43, matching his swim on the mixed free relay. Archive photo via Mike Lewis/Ola Vista Photography

Caeleb Dressel officially broke the American Record for the third consecutive time in the men’s 50 freestyle on the lead-off leg of the 4×50 free relay, clocking 20.43 to erase his 20.51 set in the individual semi-finals.

Prior to that swim, he went 20.62 in the prelims to break Anthony Ervin‘s 2012 mark of 20.85, and also surpassed Nathan Adrian‘s 20.71 which wasn’t the official American Record but was the fastest ever by an American due to the ‘suit gap’ where USA Swimming stopped recognizing American Records due to the tech suits.

This swim matches his lead-off from the mixed free relay which didn’t officially count as a record.

This swim officially puts Dressel #4 all-time in the event, trailing only Florent Manaudou (20.26), Roland Schoeman (20.30) and Vladimir Morozov (20.31). Morozov also out-touched Dressel on the opening leg in the relay, clocking 20.39.

Dressel will have one more opportunity to go faster in the individual final later this session where he’ll go head-to-head with Morozov once again.

Overall for his first time swimming SCM, ending up as the 4th fastest performer of all time isn’t too shabby. Would love to see him try out the World Cup circuit to really figure out SCM.

Yes , despite all the criticism & Too High expectations of many fans , he has had a very valuable meet so far & probably learned much more than he expected .