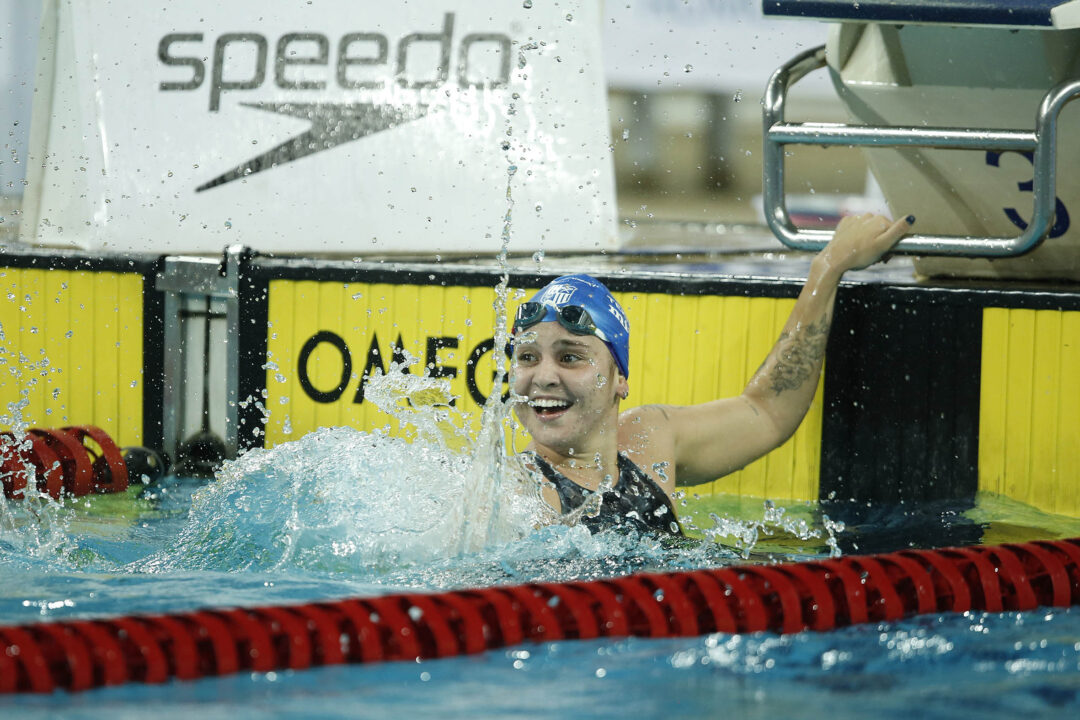 The women's 1500 free final on Monday marked the first time in any Worlds event – men or women – that three South American swimmers made the same final.

Beatriz Pimentel Dizotti broke her own Brazilian national record from Sunday’s prelims by three seconds with a 16:05.25 on Monday night, placing 6th in a historic women’s 1500 free final for South America.

The 22-year-old Dizotti has shown remarkable improvement over the past year, dropping more than 16 seconds since the Brazilian Olympic Trials last April. There, only a week after her 21st birthday, she set a new national record in 16:22.07, edging Jungblut’s previous mark (16:22.48) that had stood for four years.

On the eve of last year’s Trials, Jungblut tested positive for COVID-19, forcing her to instead swim at a make-up meet two months later where she blazed a 16:15.00 to reclaim the national record by a whopping eight seconds. At last summer’s Tokyo Olympics, Jungblut placed 20th compared to Dizotti’s 24th, but both were seven seconds off their personal bests.

The 25-year-old Jungblut was less than a second behind Dizotti during Sunday morning’s heats, but she was four seconds slower in Monday night’s finals. Dizotti, on the other hand, was three seconds faster than her national-record 16:08.35 from prelims, which qualified her sixth.

The relative results of the Brazilian women as compared to the much-more-successful Brazilian men has been a topic of conversation for a long time, largely focused around the differing cultural attitudes toward women’s bodies and fears around developing “swimmers shoulders” in the country. Now we might be starting to see a shift in that balance with the emergence of Dizotti, Jungblut, and other up-and-coming stars such as Stephanie Balduccini, who last summer became the youngest Brazilian Olympian in 41 years.

The 36-year-old Kobrich was nearly seven seconds slower than prelims and almost 26 seconds off her Chilean record from 2013.

Delfina Pignatiello of Argentina, who recently said she was “taking a step away from” competitive swimming (clarifying that she didn’t mean retiring), still holds the South American Record in the event in 15:51.68.

Other National Records Set on Day 3

It’s not that we have “fear of developing swimmer shoulders”, it would be more simple if that was the problem. The matter with Women’s swimming in Brazil is that, IMO, most coaches do not know how to deal with girls since the beginning levels of the sport. Brazil is a very misogynistic country, and the majority of coaches in basically all sports is male. Girls here aren’t encouraged to be athletes, and if they manage to become one, it is very likely they will get unmotivated through next years, especially when puberty hits. The ‘growing up’ of Brazilian girls isn’t treated the same way boy’s is, including in sport. For example, when I was 13, entering elite team at my… Read more »

Kobrich is a legend! By far the best Chilen swimmer in history, swam at her 10th consecutive world Champs.

I just realized Sarah Kohler wasn’t there. I knew she got married but didn’t realize she was skipping worlds. She definitely could have had a say in the medals especially that bronze number.

Balduccini will make the 200 Free final in Paris. You heard it here first