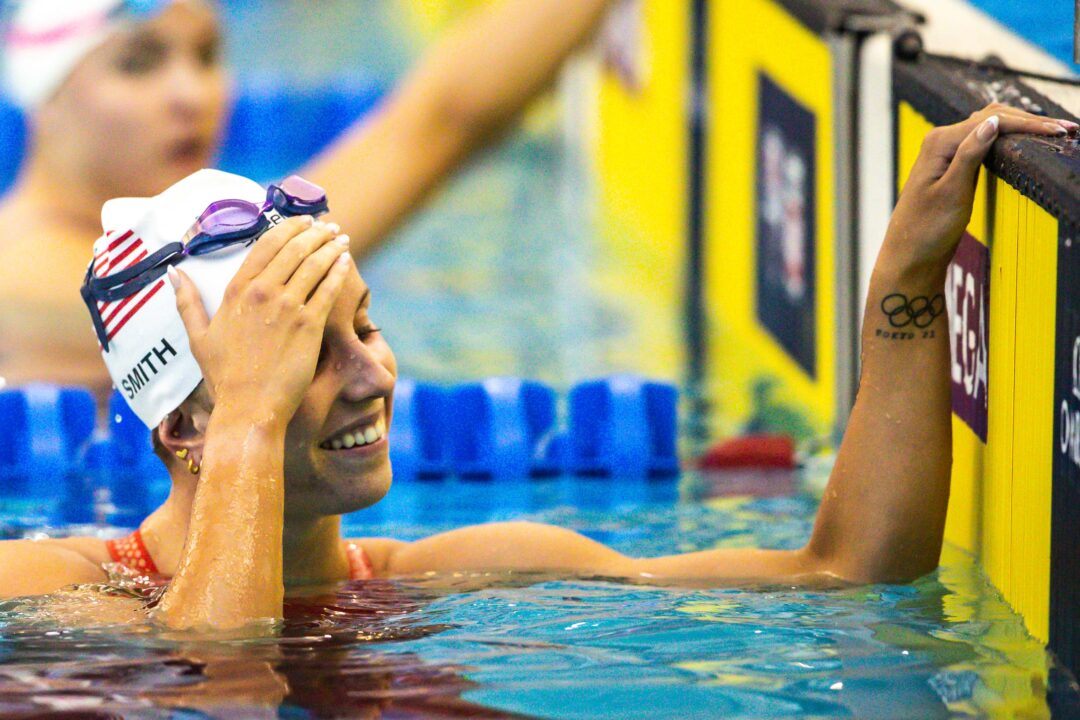 Regan Smith won Gold in the women’s 100 back tonight in Budapest, swimming a 58.22, while fellow American Claire Curzan grabbed Bronze in 58.67. Although the times were off their personal bests, the performances mark the first time the U.S. has had two medalists in the women’s 100 back on the world stage since the 2008 Beijing Olympics. Given the U.S. always seems so deep in the women’s backstroke events, that stat may come as a bit of a surprise, but it’s true – the Americans have struggle to put to women on the podium in the 100 back for 14 years.

Let’s take a trip down memory lane, and examine the U.S. finishes in the women’s 100 back at each of the World Championships and Olympics dating back to 2008.

At the Tokyo Olympics last summer, Regan Smith led semifinals of the 100 back, but was a bit off in finals, ultimately grabbing Bronze in the final. She finished just ahead of American teammate Rhyan White, who came in 4th. That was actually the most recent piece of a pattern that had developed on Team USA, wherein the 2nd American in frequently finishes 4th, just off the podium.

At the World Championships in Gwangju, American veteran Olivia Smoliga had a great performance in finals, grabbing Bronze, while Kathleen Baker, who had been plagued with injury, took 6th. Notably, the 2019 World Championships marked the emergence of Regan Smith, who broke the World Record in the 200 backstroke. Smith didn’t qualify for the individual 100 back in 2019, but after her stellar 200 backstroke races, the coaching staff decided to use her for the lead-off leg of the women’s 4×100 medley relay, where she would go on to break the World Record, becoming the first woman under 58 seconds in the event (57.57).

In 2017, it was again Kathleen Baker and Olivia Smoliga, and this time, Baker claimed Silver, while Smoliga finished 4th.

the 2016 Olympics marked the first iteration of the Baker/Smoliga duo, and again, only one would medal. Baker would grab 2nd, winning the Silver medal, but Smoliga finished 6th.

The 2015 World Championships marked a rare occurrence, where the Americans didn’t get anyone on the podium. Missy Franklin, who had been dealing with a serious shoulder injury, took 5th in finals, while a young Kathleen Baker took 8th. On its face, that seems like a phenomenal duo in the event, and it is, of course, but that was a less than 100% Missy Franklin, and an 18-year-old Kathleen Baker, who was competing at her first World Championships.

At the 2013 World Championships, Missy Franklin was at the height of her LCM powers, winning Gold in the 100 back. Elizabeth Pelton grabbed a 4th place finish, marking yet another near miss for the Americans.

The London 2012 Olympics were the Missy Franklin Olympics, where the then-17-year-old was on an absolute tear. She won Gold in the 100 back, but fellow American Rachel Bootsma finished 11th in semifinals, failing to advance to finals.

The 2009 World Championships in Rome were another occurrence where the U.S. didn’t medal in the women’s 100 back. Hayley McGregory was the leading American, taking 6th, while Elizabeth Pelton grabbed a 13th place finish in semifinals.

She definitely tightened up in that final. You don’t often see an elite talent with so much variance from race to race.

I hope she appreciates the gold medal regardless of the time. Think of yourself watching the tape 40 or 50 years from now. Hey I’m world champion. Why aren’t I going nuts and hugging everyone? Regan seems to have so much fun in everyone’s social media world but not when she’s competing.

With the monkey off her back in the women’s 100 meter backstroke, Regan Smith can hopefully learn to relax.