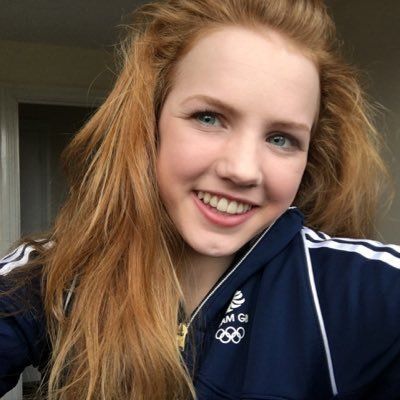 The 200m butterfly bronze medalist at the 2016 British Championships, Emily Large, is making some major moves at just 15 years of age. Current photo via courtesy of @emilyylarge

After 3 days’ worth of finals sessions of the 2016 British Championships, the meet which doubles as the nation’s Olympic Trials, just 4 athletes have logged times that qualify for the Olympic Games under Britain’s selection policy. The meet continues through Sunday, April 17th, so there are several more opportunities for this landscape to change, but the overall vibe in Glasgow is one of subdued happiness.

That’s not to say that some breakout swims haven’t occurred however, as 400 IM winner Max Litchfield earned his first British National title ever and Adam Peaty rocked another sub-59-second 100m breaststroke. There have been plenty of non-gold-medal-winning performances to rave about as well, with one being that of a remarkable 200m butterfly performance by 15-year-old Emily Large.

While competing the women’s 200m butterfly final last night, Newcastle Swim Team’s Large rocked a tremendous personal best time of 2:09.47 to bring home the bronze. Large’s time was less than a second off of winner Aimee Willmott’s 2:08.82 outing and crushed her own previous personal best entering the meet, which sat at 2:13.20. In fact, Large was barely under the 2:20-threshold at this same time last year, spotlighting just how far this young teenage talent has come in such a short time.

Time drops are common among the teenage set, but the fact that Large has managed to not just shave, but hack time from swim to swim is impressive. With her podium-placement-producing performance last night, Large scored a new British National Age Group Record 15-yr-old women. Her 2:09.47 overtook the previous mark of 2:09.57 set by Jessica Dickons from 2006.

Just for perspective, on the U.S. all-time rankings for 15-16 women, Large’s time would rank as 5th-fastest ever, sitting only behind Americans Mary T. Meagher, Cassidy Bayer, Katie McLaughli and Jasmine Tosky.

Beyond just the age group rankings, Large’s result would have garnered a 3rd place position at last year’s World Junior Championships, and an overall 7th place result in Kazan.

With her 2:09.47 time last night, Large’s swim is now positioned as the 8th-fastest British performance of all time, again at just 15 years of age.

Come to think of it, you are right. 😉

If her birthday is tomorrow she is 15 tomorrow and still 14 today.