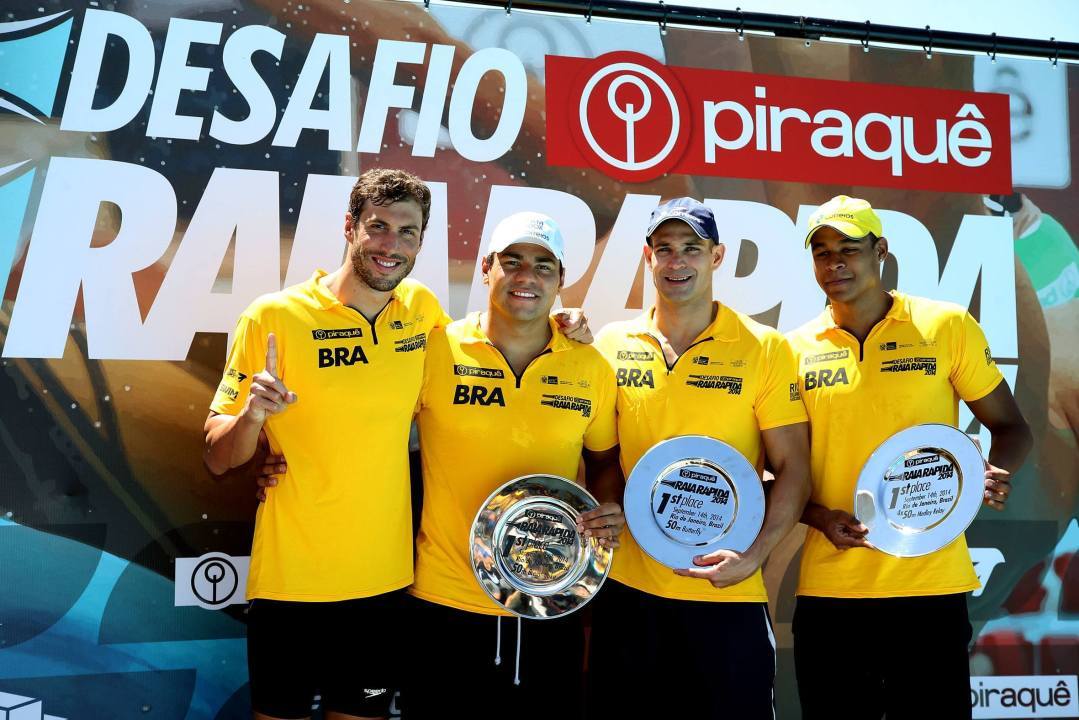 The Brazilians dominated the 2014 Raia Rapida meet, winning 3 of 5 events and placing runner-up in another. Current photo via Satiro Sodre/SS Press

Despite a compact schedule, that saw athletes race three-or-four times in under an hour, Brazil finished with a 1:37.68 in the 200 medley relay. That crushed the South American Record of 1:40.33 set at the 2011 Rio de Janeiro State Championships, a relay that included Nicholas Santos and Cesar Cielo.

That Brazilian relay, with Matheus Santana anchoring in 22.00, was able to hold off a lightning-fast 21.3 anchor from the American Anthony Ervin, though the deficit after the first three legs was too great to be overcome.

In addition to that medley relay, there was a two-round knockout for each of the individual 50 meter events. First, in the backstroke, Gerhard Zandberg swam a 25.00 to beat Brazil’s Guilherme Guido (25.12).

Things really picked up after that swim, heading into the men’s 50 breaststroke. In that race, the winners of the last three long course World Championships advanced through to the finals. South African Cameron van der Burgh and Brazilian Felipe Franca swam side-by-side for the title, but the native Franca swam a 27.21 to van der Burgh’s 27.60 for the win.

Then in the 50 fly, Nicholas Santos gave Brazil another victory, winning the 50 fly final in 22.97 ahead of American Eugene Godsoe (23.79). For Santos, that makes him the third swimmer of 2014, as the long course season draws to a close, to go under 23 seconds in 2014 – a feat that had Godsoe applauding for his competitor.

And finally, in the 50 freestyle, a no-breathing Anthony Ervin swam a 21.92 to beat out South African Roland Schoeman and his 22.19.

Us and brazil both broke the textile best of 1:38 low of australia. It could even be lower with everyone fresh and adrian and cielo swimming

I’m surprised Plummer was beaten by both Guido and Zandberg in a multiple round competition like that, because he’s both fast and consistent. It sounds like it was a lot of fun though!