Bolles School Trio Venturing North Together, All Commit to Yale 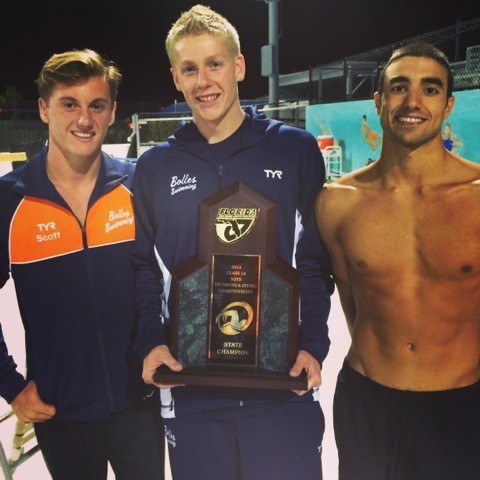 From L-R: Scott Bole, Jake Gibbons, and Joey Carbone. The three Bolles friends will spend the next four years together in New Haven.

In addition to Jake Gibbons, about whom we have already written, two more Bolles School standouts have made a commitment to swim for Yale University in the fall: Scott Bole and Joey Carbone.*

Scott Bole is a French national who swims for Monaco in France and the Bolles School Sharks in the United States. He specializes in mid-distance freestyle and finished second in both the 200 free and 500 free and anchored Bolles’ 400 free relay at the FHSAA Class 1A Championships earlier this month. His top times are:

Joey Carbone also swims for the Sharks outside school competitions. At the Florida high school championships he scored points for Bolles School with a second-place finish in the 200 IM (1:49.90) and a third in the 100 fly (49.59). His best swims include:

Their classmates will include:

*DISCLAIMER: Bole and Carbone have not yet been officially accepted to Yale. As is true with all Ivy League schools, Yale’s Admission Office will not send acceptance letters until the beginning of December, along with those of all Early Action candidates. The procedure for recruited athletes like Bole and Carbone is for Admissions to review their transcripts and SAT scores, “support (their) application for admissions in the fall,” issue Likely Letters, then offer them acceptance into the class of 2019.

Congratulations to Tim on a fabulous recruiting class. Go Bulldogs !