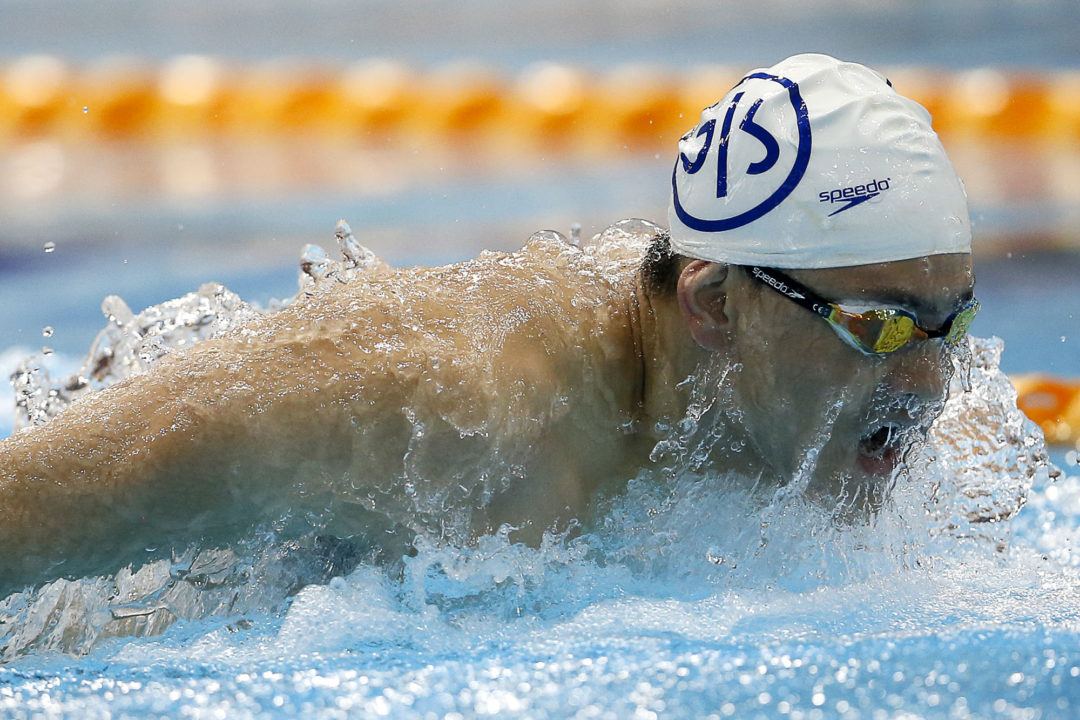 Olympians Brent Hayden, Daiya Seto, Dawn Fraser, Amanda Weir and Joseph Schooling all have stories rolled up into this edition of 'Beyond the Lane Lines.' Archive photo via Simone Castrovillari

Winning an Olympic 100m freestyle bronze medal in 2012 isn’t Canadian Brent Hayden‘s only talent. After retiring from swimming after representing his nation at 3 Olympics, the now 34-year-old is venturing into the world of photography, with his exhibition entitled “Time in Frames” on display at the Mission Arts Council in British Columbia through July 9th.

“There is a moment just before the referee blows his whistle, while the crowd is going crazy, I stare down my lane towards the wall at the other end. The noise of the crowd is drowned out by the sound of my own breath and heartbeat. For a moment, my world is still, this is where I feel the most alive,” Hayden wrote about his photography inspiration. “My goal is to capture this moment in my photography. When you look into my images, I hope you can hear your own heart beating.”

3-time Olympian Amanda Weir is returning to her home neighborhood club swim for the first time since 2012. Named ‘honorary coach’ for the Mighty Marlins at Flowers Crossing, Weir is inspiring the young athletes with her experience and wisdom.

Says Weir of her honorary coaching highlights thus far,“It’s so fun to see that not too much has changed. The kids are all having a blast, they’re all eating pizza and nachos in between races. They’re swimming for the right reasons. They’re here with their friends, getting introduced to the sport and just having fun. I love it.”

We announced in our March 2017 edition of ‘Beyond the Lane Lines’ that Japanese Olympic and World Championship medalist Daiya Seto married 24-year-old Japanese diver Yuka Mabuchi. Now a little over a year later, the couple welcomed their first child into the world. Per Seto’s social media accounts, Mabuchi gave birth to a healthy little girl on Tuesday, June 26th. An adorable photo was also included in their announcement.

Seto will be competing at this summer’s Pan Pacific Championships in Tokyo, Japan. No word yet if this newborn will be the next Boomer, on the sidelines with muffling headphones!

8-time Olympic medalist Dawn Fraser of Australia has earned a Companion of the Order of Australia this week on the 2018 Queen’s Birthday Honours list. Winning gold medals at the 1956, 1960 and 1964 Olympic Games, Fraser has been a mainstay in Australia’s swimming community ever since. In 1999 she was named ‘World’s Greatest Living Female Water Sports Champion’ by the International Olympic Committee, and was also named ‘Australia’s Greatest Female Athlete’ in 2013.

TAG Heuer, the Swiss luxury company that designs and manufactures time pieces, eyewear and fashion accessories, has named Joseph Schooling as its newest ‘Friend of the Brand.’ 23-year-old Schooling became Singapore’s first-ever Olympic gold medalist when he took the 100m fly gold in Rio in 2016.

Says the former Texas Longhorn of this new partnership, “I’m deeply honored to be appointed a Friend of TAG Heuer. As a professional athlete, I face many different types of situations, some of which pushes me into a corner. But only the strongest succeed. That’s why I live by and resonate with the philosophy of #DONTCRACKUNDERPRESSURE, which is TAG Heuer’s tagline. Through this partnership, I hope TAG Heuer and I can encourage and inspire the younger generation to beat all odds, overcome challenges and scale greater heights,” said Schooling.

On the appointment of Schooling, Ms Amelia Sillard, Vice-President of TAG Heuer, South-East Asia said, “TAG Heuer is very proud to welcome Joseph Schooling to join our family of athletes. We saw how Joseph’s story has inspired many youths to work hard and pursue their dreams. Through him, I can see TAG Heuer connecting with the millennials and the younger generations, communicating the brand’s Avant-Garde spirit—a philosophy of doing things that pushes us to innovate, to be disruptive, and to take risks. It is a new interpretation of Don’t Crack Under Pressure which, I hope, will inspire the youths of today.”

I will refrain from a Joe Schooling/”Don’t Crack Under Pressure”/NCAA 200 fly joke here.

I had a Tag Hueur watch and it was my favorite one. Sleek yet sturdy. Sophisticated yet strong. Exactly how one should swim! Way to go Joe! What he has accomplished in high school and college and Olympics is extremely rare and special.

I did, too, but for some reason, it always ran fast at practice compared to meets.

I feel like I saw an Instagram advertisement for another high-end watch company the other day featuring a woman swimming. Emphasizing how the watch is waterproof/elegant/sleek.

The guy is a celbritry endorser more than a professional swimmer. That’s why he went home…I can accept that. Needs a Maserati deal ASAP.

All of you are jealous that JoeJoe is a lean and mean swimming and endorsing machine. Just because he is a celebrity who will be more world famous than Mini-me from Austin Powers and Milton from Office Space after his movie debut must really irk most cinema aficionados. As Mini-Chimp in the new “Tarzan” movie Mr. Schooling will be hot. on the trail of another gold award – The Oscar for best supporting actor.

He’s not so lean any more.

who cares…? dudes make money and it isn’t affecting yours

#3 – A baby girl born on 26 June announced in a tweet sent on 25 June. The liberal media might have you believe this is because of “timezone differences” dependent on the alleged spherical shape of the Earth (more fake news) but I’m not having it. It’s obvious that Samsung has been holding out on the North American market so that the Japanese can gain an unfair benefit from time travel apps before releasing the technology worldwide.

#4 – This should be cool, but I just can’t be happy about Dawn Fraser getting this award after telling an Australian tennis player of foreign heritage to “go back to where [his] parents came from” because she thought he wasn’t being… Read more »

Hopefully Zheng wen can surprise Daiya Seto and nap haomura in the 200m fly,his pet event which he has been focusing on a lot the past few years!Zhengg looks set to beat Joseph Schooling national record of 1.55.73 next month.really hope Zheng hard-work and effort will pay off at asiad.the 200m fly will be Zheng wen best chance of achieving a breakthrough by delivering a surprise gold for team Singapore.

Hopefully Zheng can secure a podium finish in the 100m fly at asiad as well!he will be one of the medal favourites with a sub 52 timing.but I am pretty sure he will better Joseph Schooling 200m fly national record this time around!

If Zheng swims to his full potential,a 1.54 in the 200m fly is highly possible