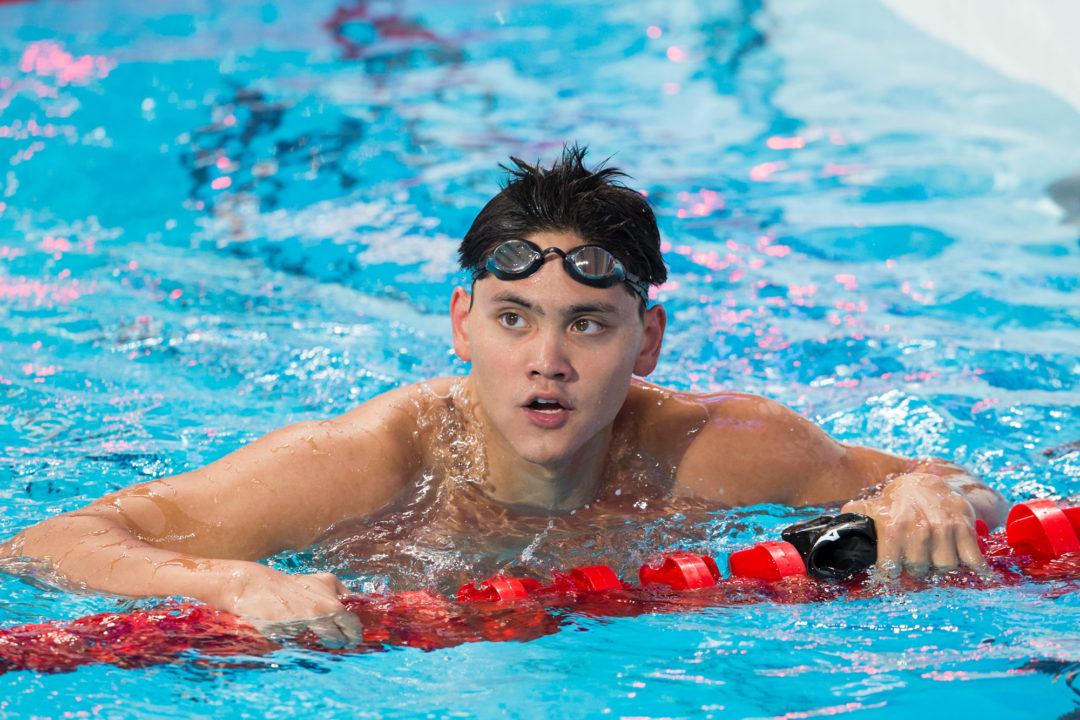 Look for Longhorn senior Joseph Schooling in Hugo Boss clothing, as the Singaporean has become the brand's ambassador. Archive photo via Tim Binning/TheSwimPictures.com

On the heels of the men’s D1 NCAA Championships where his University of Texas team nabbed the hard-fought team trophy, Singaporean Longhorn senior Joseph Schooling has been named as a new face for German fashion house Hugo Boss. The company has released a capsule collection in collaboration with 22-year-old Schooling, which is now available in store across Singapore.

“As a youthful talent with a relentless drive for success, he is a perfect fit for the brand,” said Mr Steven Lam, managing director of Hugo Boss in Southeast Asia. “His path to victory is a continual, ever-evolving journey that he approaches with dedication, precision and confidence.”
Although Schooling came away without an individual gold at the NCAA Championships, which just concluded in Minneapolis, he still holds the historic claim to Singapore’s first-ever Olympic gold medal with his 100m butterfly victory in Rio. Since then, Schooling has been balancing his college swimming with his enormous home country fame. He and his parents have rubbed elbows with the upper echelons of Singaporean government, they have opened a Schooling Sports Academy, while Schooling was also the recipient of an almost $800,000 bonus from Singapore for his gold medal.

Of this new Hugo Boss ambassadorship addition to his resume, Schooling says, “It is a tremendous honour to be part of such an iconic brand. (Its) focus on quality and authenticity resonates with me on a personal level.

“Looking back, I would say I can be proud of my amateur career in general. No doubt – as with every journey – I have had to endure some lows as well as some highs.

“Every experience has helped me become the person I am today,” says Schooling.

I’m shocked that he had time for this based on his elite performance at NCAA.

maybe he only put pen to paper after the meet?

Likely put pen to paper months ago with contract to take effect, and payment to land, the second he touched the wall on the 400 free relay.

As much security as you can get for Hugo Boss whilst sticking to NCAA rules.

Well, not a lot NCAA can do about it given he is already done with college swimming.

Retroactively disqualify him for any meet he participated in after signing. Cal wins the title lmao.

Think of the can of worms that opens in men’s basketball and football.

No way the NCAA is setting a precedent which could see half of March Madness deemed void because some one and done put pen to paper, no doubt on a contract drafted to stay with the letter but not the spirit of amateurism, on a sneaker deal two weeks early.

They could probably go back and investigate the school for allowing payments to players, retroactively stripping NCAA Titles. They’ve definitely done it before in other sports, like Basketball and Football.

If it is against the NCAA rule, will his points from NCAA be forfeited? Cal might win, actually.

Wanted to be here before the hate, but he gets too much

“His path to victory is a continual, ever-evolving journey that he approaches with dedication, precision and confidence.” Umm, what path to victory? You mean the one two years ago?

Is there anyone else that gets as much hate for legitimately winning an Olympic gold medal than Joe Schooling?

Not in swimming. I almost feel bad for him sometimes, not sure why he gets all the hate

“50.7 practice”
“Gonna break Phelps world record”
“I want to see Shields watch me take his record down”
“I’ll be the first under 43”

is that true about shields? thats kinda lame. but the others are not that bad

these comments are no big deal. Schooling never attacks other swimmers, he’s just a little brash

Schooling topped Michael Phelps–in Phelps’ last Olympic Games. It was “kind of” an upset–a lot of commenters here saw it coming. CONTEXT: It’s hard to refocus after becoming an “individual’ gold medalist. It’s challenging when your star burns so bright, and Schooling is a MASSIVE STAR in the Far East. I think Schooling’s going to be dangerous in 2020 in the 100 fly. He’ll be ready by then, and anything can happen when you consider all athletes have to be on, hitting their taper right, and healthy during that one 8-day window over a 4-year quad. (THIS PAST WEEKEND’S WEAK PERFORMANCE: Schooling took that break after the Olympics, then progressively ramped his training back up. This past season it seems… Read more »

Over-trained? Oh come on Mel…! Joe looked anything but over-trained. Under-trained more likely considering that last 50 split in the 2 fly.. Of anyone on this site, you would know that better than most. In a couple months Reese or Schooling will likely drop a hint about that.

Townley Haas looked fantastic, obviously. Neri added quite a bit of time after dropping a lot in his 500 over the yeats, but the rest of them looked pretty good. Shebat was surprisingly fast, Katz looked great, Sam looked good.

Marmot I’m curious to know and understand. With your expertise how exactly do you differentiate between a swimmer that is overtrained vs undertrained? How exactly will their splits be indicative of either or these. Really curious to understand this better

I don’t want to speak for Marmot, but I assumed he was under-trained because his splits were: 22.3/25.7/26.5/28.7. That gain of 2.2 seconds from the third to fourth 50 suggests (to me) a lack of conditioning, which I associate with under-training. None of the folks in the A final had that big a drop off in prelims, only Quah had a drop off of more than 1 second. He seemed to have decent speed at the meet though. Maybe not quite what he had in the past, but in the range. It seems like if you have speed, but die at the end of a longer race, under-training is more likely than over-training, which I associate with a drop in… Read more »

I’ve always heard that a steep drop off on the last 50 like that could be an indication of either. Having a lack of conditioning has an obvious impact at the end of 200s, but if you are underrested your back half suffers equally because your muscles have not recovered from hard training to the extent that they should have; which makes that last 50 hurt a lot more than it should.
Mind you I have no idea whether this is true or not, it is just what I have been told by coaches in the past.

It’s not a big deal. Sometimes you hurt people’s feelings by pointing out facts. But the soul of your post is correct. He didn’t put the work in again, that was obvious this weekend. He don’t split 28 on your final 50 at NCAA’s if you covered all your bases during a season,and the times you go at the end of the year reflect what you did during the year.

did he die or give up? just wondering

Seriously agree. Last year he was under trained to the point that he couldn’t swing a decent (by his standards) 200 fly, so he focused on the 50 and 100, bulked up a bit in the weight room and the results were in the 50. This year I think he wanted to focus on getting his 200 fly title back, but he under trained for it leaving him not as fast on the 50 free, but without enough to be dangerous the last 50 of the 200. Bottom line, whether he manages to get his training back in check or not (I really hope he does), it’s unlikely he’ll be within a second of Dressel in 2020. He beat Phelps… Read more »

It seems as if Schooling lost motivation after Rio and can you really blame him. He set a textile world record, defeated his childhood idol Phelps and legends Le Clos/Cseh, and became his countries hero all in one race all after just turning 20 years old. He was coming off two years of dominating at NCs. I imagine it’s hard to keep that hunger once you are on top of the world. Dressel exploded just when Schooling hit this level of complacency and it seems unclear whether Schooling is mentally defeated or just hasn’t had enough time to regroup and react. Maybe as you said Mel Texas was overtrained. It does seem however that Schooling has seriously lost his mental… Read more »

Mel, you said the same thing about Schooling and being dangerous at last year’s Worlds. Then it was the rest was going to do him good. Truth be told, like Clary winning the 200 back for gold on a beat up Lochte, a fresh struck fresh late in an Olympic program against three worn-out (from their events) challengers, including Phelps. I get he’s a massive star in the Far East, but the reality is he’s now nearly a second behind Dressel with other stars on the horizon.

Not sure about the “speed wasn’t there” line. Haas, Shebat, Roberts, Pomajevich, Katz, Harty swam well. Jackson was on a double taper. That really leaves Schooling and Ringold as the no-shows. Texas always had no-shows (most famously Clark Smith the year he couldn’t sleep). The bigger factor for Schooling is you cant be a 50 freestyler and a 200 flyer. LeClos is as close as anyone has been to being able to do that. As Schooling’s opted more for the 50 free (over the 200 IM in SCY and the 200 LCM fly), his 200 fly has gone to pot and even his 100 fly has suffered.

It was difficult to know what he was doing..and like him or not it was painful to watch .. as he warmed up, warmed down and in his events..

I feel like I just read a Gold Medal Minute

Anyone else read this and can just hear Mel’s soothing voice over? just me? oh…

I think as a college junior with 800k in the bank from international meets, I’d probably loaf around NCAA’s too. Think of it like a PGA pro in a Pro-Am, on Wednesday the amateur your playing with is going all out to win and you’re kind of going through the motions getting ready for Sunday to get paid

U should change your username. It is misleading. Initially i thought u are a fan of Texas Longhorns. In the end, u are just a Schooling hater.

You require blind faith and support from everyone? Thats not how it works