Beyond The Lane Lines: Hannah Miley Gets Engaged 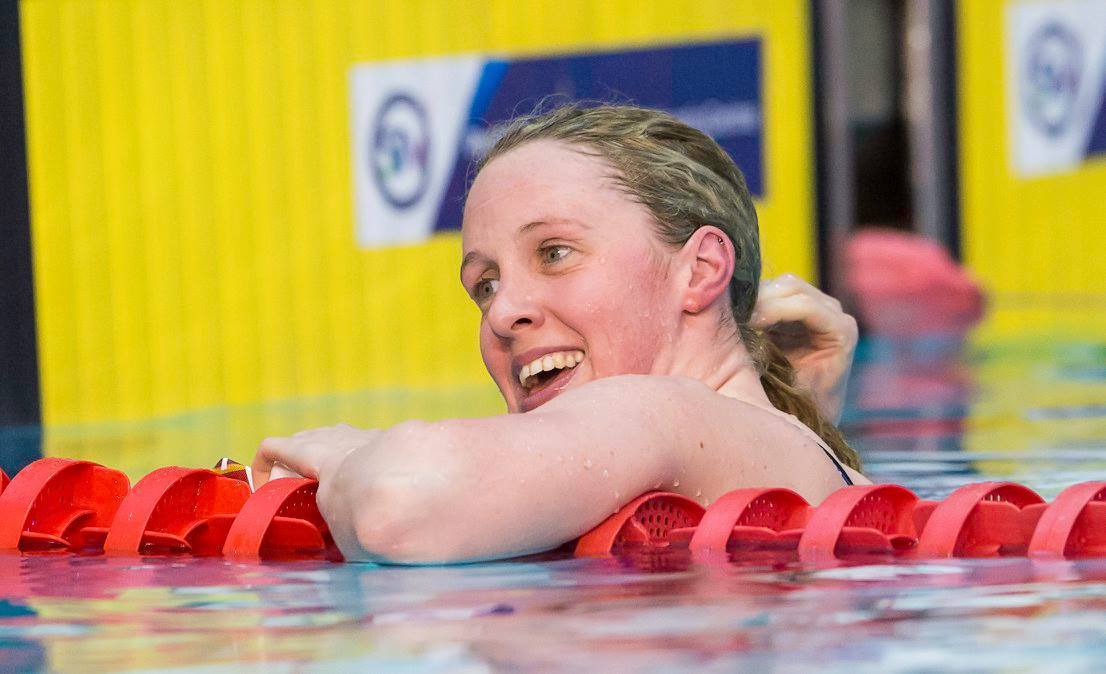 If the 'Swim. Eat. Shower. School. Snack. Swim. Swim. Swim. Dinner. Homework. Bed. Repeat.' routine sounds like you, you may like one of the new released in this week's Beyond the Lane Lines. Archive photo via SWPix.com for Scottish Swimming

Get your weekly news fix on happenings outside the pool with the latest edition of ‘Beyond the Lane Lines.’  British Olympians Jazz Carlin and Hannah Miley highlight this edition, which also reveals some swimming-related new releases in the literature and art world.

The CEO of RLSS UK stated, “We are absolutely thrilled to welcome Jazz as an ambassador and we believe she will be a real asset and inspiration to people, helping us to raise awareness of all of the work we do. Jazz’s fantastic achievements to date, and I’m sure in the future, make her a perfect ambassador for us. We would like to thank her for her support and wish her luck as she heads towards her Tokyo goal.”

Says Carlin of the opportunity, “I am looking forward to doing what I can to encourage participation in open water swimming, highlighting the importance that this is done in a safe environment. I wasn’t able to participate in many open water events pre Rio 2016 but I absolutely love taking part in them and will be looking to include more in my schedule moving forward. I can’t wait to get stuck in!”

RLSS UK’s site says the group aims at promoting safe open water swimming, working with various partners and governments at local and national levels to increase the number of safe sites across the UK.

27-year-old Hannah Miley and boyfriend Euan Duff have announced their marriage engagement. The pair recently visited the Edinburgh Zoo, where Duff popped the question, which the Commonwealth Games gold medalist called ‘the biggest surprise ever.’

Per her Instagram post, the 2016 Olympic finalists says, “Have to say we are super happy and I can’t believe what Euan did to put this surprise together.’

Erm so what I thought was genuinely a wee visit to the zoo turned out to be the most exciting day ever ? Little did I know @euanduff had masterminded the biggest surprise ever! Just casually posting pics on my story of the zoo visit, a few people said they saw it coming but I genuinely didn't? Have to say we are super happy and I can't believe what Euan did to put this surprise together ? thanks to @edinburghzoo for making the day so special

#3  Ever Thought Of Swimming To Work?

Munich, Germany native Benjamin David was a little too annoyed with how slow his daily commute to work was becoming, so the man decided to change it up a tad….by swimming to work. Every day, warm or cold, David part-swims, part-floats down the Isar River, with his total distance hitting around 1.2 mile mark. According to David, the 20-minute aquatic commute both saves time in the car, but also clears his mind for the day ahead. “When I’m swimming, I am indeed quicker, and also more relaxed,” he said.

Olympians from Australia’s past, including Shane Gould and Ian Thorpe, are just two of the noteworthy figures who have lent their voices to an audio-visual exhibit open at the National Gallery of Victoria entitled ‘The Pool: Architecture, Culture and Identity.’ With Thorpe narrating a piece named ‘Bodies of Water’ and Gould contributing audio to ‘Theatre of Competition’, the exhibit explores Australian cultural identity through the influence of pools in Australia.

A physically constructed 11m long swimming pool complete with decking and bleacher-seating is part of the exhibit, which is ‘designed to provoke discussion about the role of the pool in Australian national life.’

It’s rare to find a book whose main character is a swimmer, but that’s exactly the premise of Miranda Kenneally’s ‘Coming up for Air.’ Released July 4th, the book centers on a high school swimmer with Olympic dreams, whose daily routine is described as Swim. Eat. Shower. School. Snack. Swim. Swim. Swim. Dinner. Homework. Bed. Repeat. The normal struggles of balancing high school swimming with trying to have a life outside the pool are explored in this novel.