The Ballad of Anthony Ervin “The Sprinter With No Start” 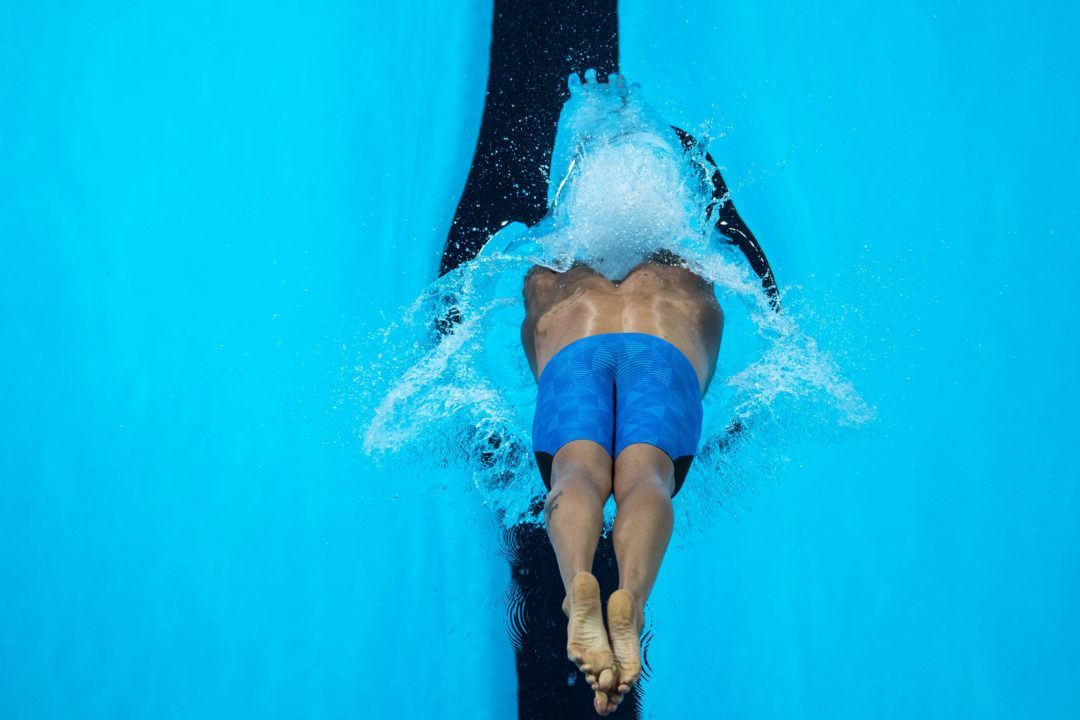 Anthony Ervin has never been the fastest beginner in the game, but he finds a way to make it work for him Current photo via Mike Lewis/Ola Vista Photography

Anthony Ervin is going to the Olympics for the third time. The most unbelievable fact about that is not that he is 35 years old and swimming as good as ever. We’ve seen that before (see Lezak, Jason). It’s not that he took off nearly a decade from the sport and then returned to Olympic form. No, the most unbelievable part of Anthony Ervin going to the Olympics is that he qualified in the 50 (and 100) despite struggling with what is considered one of the essential pieces of the race: starting. The final was a rare decent start for Ervin, so let’s take a look at before we watch poorer quality video of where he came from:

That Ervin is bad off the star tis now news, even when he was an Olympic champion in 2000, he struggled in the early part of the race. However, while Ervin is far from a perfect technician off the blocks, he is hardly worse than many of his competitors. In fact, watching the Olympic final from 2000 is fun for two reasons. The first, to feel old because half the field is using a two foot grab start, the second because despite better than average technique for the field, Ervin is still behind when he breaks out:

The explanation for this is simple, and explains some of why, despite this glaring “weakness” in his game, Anthony Ervin has remained a below average starter at the international level: Anthony Ervin is small! Despite decent height (6’3/1.91m), Anthony Ervin is really skinny for a sprinter (wikipedia lists him at 170lbs/77kg). Compare that to his teammate (and fellow 50m qualifier) Nathan Adrian. Adrian stands 6’6/1.98m, but weighs far more than Ervin (227/103kg). Adrian’s body weight is 134% of Ervin’s. In fact, Adrian had a terrible start in the final in Omaha but broke out even with Ervin despite that.

How does body size matter for a sprinter? Well, there are two important (and anecdotal) reasons. The first is that body weight plays a big factor in how fast you enter the water, given reasonable technique off the blocks. I have observed and times hundreds of swimmers to 10m. Bigger swimmers generally perform better. The second is that body weight influences how swimmers are affect by the wake of others throughout the race. Don’t believe me? Here are a few examples where I believe body weight had a big impact on an important sprinting race.

Eamon Sullivan entered the final having set a world record in the semi-final of 47.05. Had he repeated that time, he would have easily beat Alain Bernard in the final. But he did not. Sullivan swam 47.32 and finished a disappointing second to Bernard. The semi-final was, however, set up just as perfectly for the slight Sullivan (almost the same height and weight as Ervin), whereas the final was not. In the semi, Sullivan’s top competitor was Pieter van den Hoogenband, another sprinter with a famously bad start.

Sullivan could therefore employ the best strategy for slim swimmers who want to win a 100m: get out fast ahead of the waves of the other swimmers and hold on for dear life. Sullivan did just that, splitting 22.4 on his way out. However, in the final, next to the hulking Bernard (hard to pin down a source on his height/weight in 2008 but judge for yourself), he found himself matched on the first 50 and unable to swim in clean water.

The blueprint for such a victory was actually set by Ervin at the 2001 World Championships. Ervin had not even qualified for the 100 at the 2000 Olympics, although he did swim a decent 48.89 leadoff leg on the 4×100 relay. In Fukuoka, Ervin faced off with van den Hoogenband at the height of his sprinter powers, along with Thorpe. Thorpe was dominant at the meet, winning six golds.

Ervin took the race out in 22.6, a full half-second faster than world record pace at the time. He really benefits from the absolutely awful start of Hungarian (shocking) Attila Zubor. As a result, he completely took Thorpe out of the race, and pushed van den Hoogenband out of his typical race strategy another lane below. He had clean water almost the entire race, and despite nearly being caught at the end, hung on for the win.

There have been a lot of highlights in Anthony Ervin‘s comeback these past five years, but his best individual international result in that time has been a silver at the 2014 Pan Pacs. Ervin’s start means that he often performs better in heats or a semi-final where he can break away from his competitors with his speed on top of the water versus finals where he is buffeted from all sides by bigger swimmers. If you’re still not buying this theory, I submit that Ervin swam a faster time in the semi in London (21.62 vs 21.78), Barcelona 2013 (21.42 vs 21.65) while only slightly improving in his 2014 Pan Pac performance (21.75 vs 21.74).

The final wrinkle in the Rio puzzle is that another top sprinter in Rio, Cameron McEvoy, is even smaller than Ervin. It will be compelling to see how these two David’s contend with the field of Goliath’s in men’s sprinting.

Ervin is going to be Ricky Bobby in Rio. He’s just going to go fast.